Slicing the Pie – How to Cut a Pizza

Although the true source of this tale may be questionable, the great Mickey Mantle attributed it to the legendary Yankee catcher and Yoo-Hoo beverage spokesman, Yogi Berra, who was known for his whimsical quotes:

“Whitey (Ford), Yog and I went to a pizza place after a game. The waitress wanted to know if we wanted ‘em cut in eight or four pieces. Whitey and I said ‘eight’, but Yog said, deadpan, ‘Naw, cut mine in four. I don’t think I can eat eight.’”

Then there is also this spin on slicing a pie from the stoner Badger on the AMC Breaking Bad television series. Badger started out by telling everyone how this one place didn’t cut their pies and “passed the savings on to us!” http://www.youtube.com/watch?v=2vJJfeYSGrY

OK, so slicing a pie should be fairly simple and as a result, we expect it to be consistent. A pie is of course, and always should be, a circle. The classic cut for a regular size pie is for it to be eight slices, or in geometric terms, defined as a part of a circle, sectors. So to get eight slices, it takes four whacks with the pizza cutter, each whack simply cutting each new uncut area in half. And the proper way is to use a pizza cutting wheel; not one of those pizza knives like you might see used at some pizza chain.

Although it sounds fairly simple, why do places sometimes get it wrong? Have you ever gotten the puny little leftover slice at a Sbarro (more on them in the future) or at a supermarket like Whole Foods? I guess it does take some skill to get adept at the process and these places are more prone to having amateurs involved. I also feel that the faster I see the pie getting sliced, the more confident I am that it will be cut right. It’s also OK for the initial pie cut not to be a complete slice-through and having to deal with a slight “tear-away” from the neighboring slices prior to eating a new one is a totally acceptable practice.

Do you know they even sell a pizza cutting guide to lie over the pie to help you slice it? Kind of like training wheels for a pizza cutter.

Here is a classic pie cut courtesy of San Vito Restaurant in my home town of Bayonne, NJ. 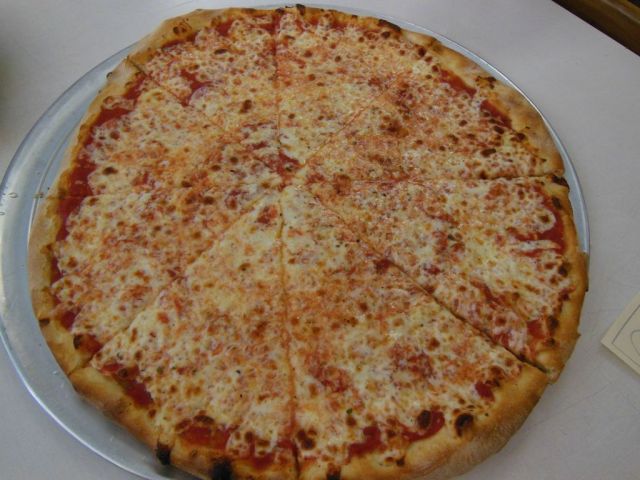 ← Pizza On the Road – Louisville, KY
Music City Pizza – Who Makes the Best in Nashville? →