The Snob’s alter-ego, Music City Mike,  just loves a road trip. He jumped at his friend Monty’s suggestion that they head to Huntsville, Alabama to see Jason Isbell and the 400 Unit record a live record at a local club. As with any road trip, the Snob did his googling and came up with a pizza stop – Famous Joe’s Pizzeria in Madison, Alabama. Outside of being enticed by the pictures and menu on their website, how could the Snob pass up the opportunity to meet the man who claims to be the Guinness world record holder for the highest pizza toss?

Monty and I arrived around dinner time and were seated on Joe’s outside patio. We were warmly greeted with a tasty complimentary appetizer of fried green beans. As Joe doesn’t do slices, we opted for a small cheese pie that was somehow upgraded to a large just as Joe himself showed up at our table. He had been on the watch for me after I made the compromising blunder of telling him I was coming. The potential awkwardness of a bad review abated as soon as we dived into his wonderful pizza creation.

A self-described pizza nerd, Joe is forever studying the art of pie-making. By his own admission he studies cutting edge pizza technology. He passionately described to us his special two-day dough making process evident in its unique taste.  The pizza was nicely toasted on the bottom while light and fluffy in between the cheese and sauce. Excellent! Monty pointed out how you could even see the air between the spaces. Nice! Both sauce and cheese were quite tasty although it was a tad thicker than the usual classic NY-style slice. All in all, this was great tasting pie. 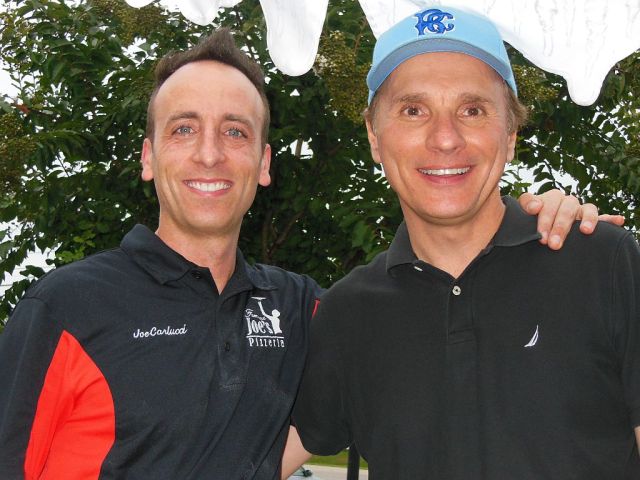 The Pizza Snob was really glad to meet a pizza nerd like Joe and hear him talk about his passion for pizza and the zeal he has for his business.  But that’s not all Joe does.  He enjoys making pizzas competitively and doing fun things with his craft—like the pizza he did in honor of Tim Tebow’s birthday.

Famous Joes is only about 10 minutes from the interstate—a great stop if you are ever passing through Sweet Home Alabama.  One more thing – save some room for “The New Yorker” desert pictured below – it’s unique and amazing.