Atlantic City NJ Boardwalk Pizza – I Gambled and I Lost

On a recent trip home, Mom and Dad suggested we accept the Borgota’s offer of a free Atlantic City hotel room so that they could spend a day pushing buttons in the casino to win credits on slot machines. (I think slots were more fun when you got to pull the handle and coins poured out.) The Snob’s gambling days are over, but the beach and boardwalk are always fun, and, as I have learned, there can be a pizza story in every adventure.

The Jersey boardwalks along the Atlantic Ocean were magical places for me in my youth: the fun of games of chance; the thrill of rides; the challenge of miniature golf; the sights and sounds of arcades; and the smells and tastes of great junky food.  Today’s Atlantic City Boardwalk, however, is a shadow of its former self:  A large part of its space is now home to hotel and casino frontage. The aforementioned thrills are harder to find; it’s just not the same since gaming took precedent.

While Mom and Dad played away, I took the liberty one sunny, windy afternoon to walk the boards and scope things out sampling pizza along the way. In doing my homework, I found nothing that looked worthy. Reluctantly, I set my sights on Three Brothers Pizza Palace, a place that my brother and I had visited on a similar trip about a year ago. At the time, it was simply a late night hunger mission: Three Brothers was the only place open that night, and I have little recollection of that visit.

I ordered a cheese slice at the counter but made the mistake of taking it to the back room to eat. The filth urged me to get out of there in a hurry. I also made a bigger mistake in using their bathroom which was downright disgusting. As for the pizza, the slice was a bit larger than usual, prepared and cooked in the classic style in a traditional pizza oven. Well-cooked and economical in its volume of dough, cheese and sauce, I found the slice decent tasting but lacking any real pizzazz.

Walking further down to the north end of the boardwalk, I noticed Three Brothers had another place in a new shopping complex that looked much cleaner. I decided to pass and head back to the hotel.  Why had Three Brother’s serious effort to make a classic slice under apparently traditional conditions produced such a lame result? Cheap ingredients. That just had to be it! The other thing I realized was these boardwalk joints try to be all things for all people offering pretty much every greasy fast food item you can think of. From cheese steaks to chicken tenders, they are perhaps jacks of all cuisines and masters of none.

Out to prove my newly-discovered theory, I tried another boardwalk spot I stumbled upon on my walk back, Mario’s Pizza 2. This was another place offering a wide variety of fast food items, even falafel. I ordered a cheese slice at the counter and ate it on their boardwalk dining area. I should have known something wasn’t right by its overly orange color – a tell-tale sign. This slice was absolutely awful – most likely a victim of inferior ingredients.  This slice also suffered from poor execution altogether. The doughy undercooked slice was so limp I actually had to use the paper plate to leverage it into my mouth. It tasted horrible in every aspect.  I threw it away after eating a few bites. This was truly the worst slice the Snob has tasted in his brief career. This slice should “Go to jail without passing Go!” 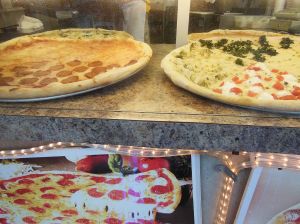 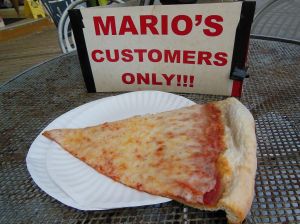 Conclusion:  If you want pizza in Atlantic City, the Boardwalk is not the place to go. That puffy slice Mom had back in the hotel food court would have been a much better option.

PIZZA SNOB RATING     * Should Not Have Been Called Pizza