Mrs. Pie hails from the great state of Texas–specifically the town of Weatherford, population 25,000. Dubbed the Peach Capital of Texas, it is located half an hour west of Fort Worth. When we were first married, there seemed to be only a few signs of civilization to this Jersey boy, but today, just about every single chain restaurant and box store known to man is there.  Locally-owned The Pizza Place has remained over the years the most popular pizza joint in town.

As always, one night of the holiday week would be pizza night, so the Kid and I made the journey to their location just a few blocks off of one the town square’s four spokes. Our mission was to get three pies: veggie, pepperoni–and cheese-only for the purists in the bunch.

Located on South Main, The Pizza Place once had the prime spot across from the local high school which was a perfect location for gathering after a Weatherford Kangaroo football game.  The school has since moved, but businesses have grown around it to keep the joint hopping.  The Pizza Place is a fun place staffed by friendly folk.  It offers three different seating areas: front, side (with arcade games) and an upper loft. We ordered at the front counter getting a large-sized King of Diamonds playing card to mark our order and proceeded to wait in the front lobby where we watched our pies being made. 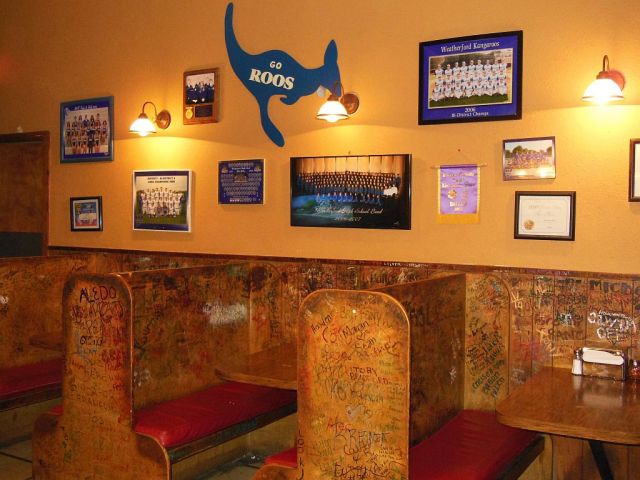 Having had their pie before, my expectations were low.  I soon would learn that nothing had changed. While it’s a decent pie made from good, fresh ingredients, it lacks the classic pizza-making touch. The cheese and sauce were about right, but the real issue with this pie was its crust. Although it was crisp and tasty, it was at least three times as thick as it should be. If they would have cut it square and cooked it crispier, they could have almost passed it off as Sicilian Pie. In addition, our pie was way too oily. This combination of too much crust and oil left me with both a heavy feeling in my tummy and a bad aftertaste in my mouth.

As for the Texas side of the family, The Snob is still fine-tuning their pizza-appreciation skills, so most enjoyed their meal.  Mrs. Pie pointed out that even though it was not classic NY style pie, it accurately represented the Texas interpretation of pizza.  My young nephew, the Tay-ster, called this one right, however, when he pronounced, “The crust is too thick, and it overrules everything on the pizza!” Ah!  A possible apprentice in the making!

While The Pizza Place may be a fun place to go and hang with your friends, there’s much better pizza to be found in Weatherford. Watch this space!

← Old Chicago Pizza Comes to Town – NY-Style Comes Up Short
Fort Worth, TX – Why Are All the Pizza Places Named Joe’s? →