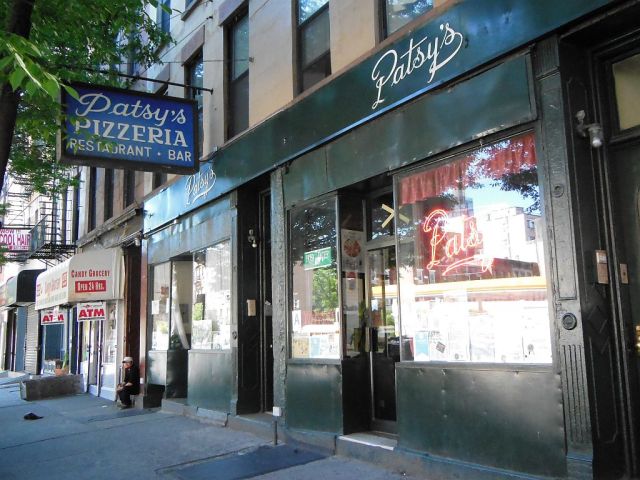 After finishing our business meeting midday in Manhattan, it was easy to entice my business associate from Tennessee into a New York City pizza experience for dinner. Since we would be attending the Yankee game that evening, my bucket list indicated it was finally time for me to visit the legendary Patsy’s Pizzeria in East Harlem just a short hop away from the stadium in the Lower Bronx. To get a sense of Patsy’s notoriety, visit their website where you will hear an audio clip of Frank Sinatra raving about the place during one of his concerts.

Leaving Midtown, Dan and I caught the “6” Train to 116th Street and walked the remaining few blocks over and up to Patsy’s through a bustling late afternoon Harlem. Later, our waiter would remark that this was something we wouldn’t have felt safe doing about five years ago. But today, there’s a new shopping mall down the street, and Harlem has certainly made a resurgence.

We arrived to find Patsy’s empty at this time of day and were able to leisurely explore the history of the place. After reviewing the cavalcade of photos, stories, and awards that hung in the main dining room, I thought “If only these walls could talk.” While taking a photo outside, a local passerby surprisingly asked me if I would be writing about the place and told me that this was the favorite place of Sinatra and Joe Namath. Inside, Sinatra’s was the most prominent photo on display.

First open in 1933, Patsy’s is one of the City’s few remaining grandfathered spots still allowed to operate a coal oven. They are also a full-scale Italian restaurant serving up everything from Mussels to Tiramisu. I was excited to see that they offered a regular cheese pie as well as a Margherita one, so this would be my first coal-fired regular pie. We went for the plain Original Coal Oven Pizza which seemed quite reasonably priced at $12.00. However, our bill (cash only by the way) would get inflated by the salads, beverages, and deserts we found hard to resist.

While waiting, I again went outside and saw they also feature walk-up and take-out storefront next door serving up modestly priced $1.75 slices. There seemed to be a steady flow of double-parked cars on busy First Avenue stopping to run in and get their pies, including some hungry on-duty New York City police officers!

Our pie arrived as a work of art. We immediately knew that Sinatra was right—this was one of the best pizzas you could get anywhere in the world. The pie was nice and thin with just the right amount of fresh cheese, tasty tomato sauce and smooth olive oil, all blending perfectly together. Toasted over the coals, the crust was fired black and crisp on the bottom. There is nothing quite like the flavor that comes from coal-fired chewy pizza crust. It was absolutely delicious. Needless to say, Dan and I easily devoured our pie and for a moment thought of ordering another had the subject of cheesecake not come up.

The hike to Harlem was well worth the journey, and our only difficulty was in hailing a cab on First Avenue to get to the Stadium. We were forced to return to Patsy’s where our friendly waiter called a car service for us. Fully fed, we made the short drive to the game, and our day was made complete with the Yankees coming out on top just like the pizza at Patsy’s. 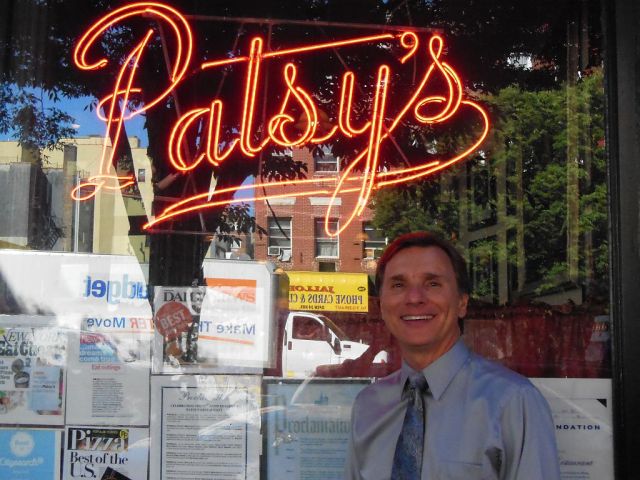 ← TOPPINGS – How Do You Misuse a Domino’s Pizza?
John’s of Bleecker Street in Greenwich Village–Coal-Fired Pizza Delight →