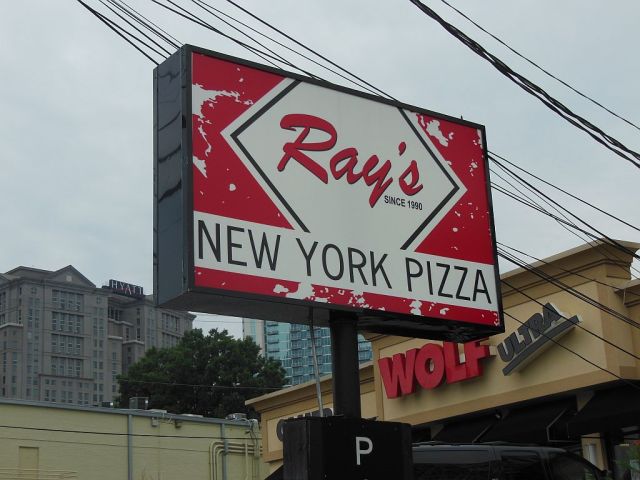 Thanks to the wonders of Priceline, Ms. Pie and I can afford to spend our ATL getaway weekends in its upscale Buckhead area. Centered around the main thoroughfare of northern Peachtree Road, Buckhead boasts high-rise office buildings, classy hotels, fancy shopping and exquisite dining. On a previous visit, my better half stumbled on to Ray’s New York Pizza while satisfying a late night craving for some gelato. This time out, she suggested we give their pie a try for a late Saturday afternoon snack. Enticed by their use of one of pizza’s most famous names, how could I resist? 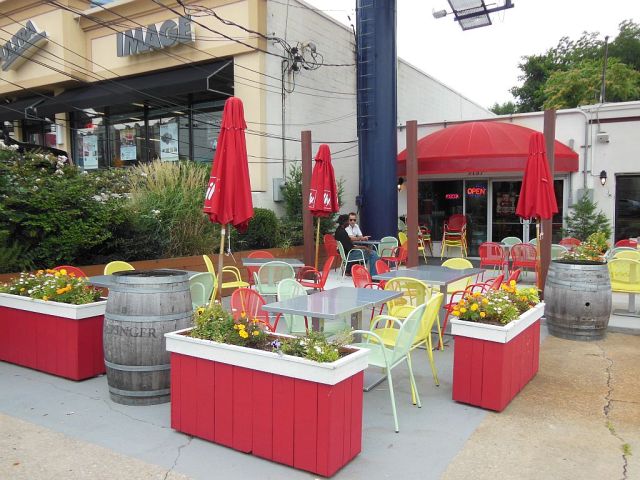 Ray’s has been in business since 1990, and their Buckhead location sits on the end of a cramped little strip center on Piedmont Road just off Peachtree proper. (They have three other joints in the Atlanta area.) Parking is a precious and sometimes pricy commodity in Buckhead, and driving up to Ray’s I came upon a first:  a pizza joint with valet parking! Feeling fortunate, I noticed a vacant spot right in front and by-passed the valet dude only to get cautioned that I was parking in “the owner’s” spot. Thinking that the owner surely would not object if I was patronizing his establishment, I learned inside that the dude had meant the owner of the parking lot!

Parking at our own risk, we walked right through their front, outdoor patio area into a shotgun style room.  We seated ourselves at one of the not so comfortable, cafeteria-style tables. If there was valet parking, you know there would be a waiter, and we promptly each ordered a cheese slice ($2.75) from ours. While waiting, we were disappointed to see that the gelato fridge was empty due to some minor malfunction. Despite not wanting to ruin our dinner, that would have been a temptation too hard to resist. Eyeing the menu, in addition to the standard fare (pizza, salads and calzones) we noticed that there were some atypical Mediterranean and veggie selections. Beer and wine were also available.

The slices came out looking fresh but a little out of sort. Size-wise they were wide triangles, and the very white-looking cheese sat atop the very red-looking tomato sauce looking more like an afterthought than a basic ingredient. Fortunately, they were both in the right quantities, and the crust was splendidly thin and nicely-blackened. I observed that the slices were previously par-baked waiting for the cheese to be added before they went into the wood-fired oven.

Both Ms. Pie and I thought our slices were tasty.  We both agreed they could have spent a little more time in the oven to get the otherwise delicious and chewy crust crisper. They advertized their ingredients as mozzarella and San Marzono tomato sauce. While the sauce was fabulous tasting, the cheese was a weak link, with an odd rubbery-like texture and an unpleasant aftertaste.

To sum things up, it was a tasty slice but simply not authentic and classic enough to bear the name “Ray’s New York.” And, with the five-slice rating Fellini’s Pizza sporting seven ATL locations, you know where the Snob is going to get his pie when he’s in town.