Chris’ Corner in Bayonne, NJ—A Return to Where the Snob First Discovered Pizza

The Snob grew up on the same block as Chris’ Corner, and their pizza was the first he ever tasted. In the early 60’s, Mom would call in the order, and I would walk down the street to bring home a tasty, classic, large pie for $1.25 or a small one for $1.00. Like many East Coast establishments, Chris’ Corner was a fine family Italian restaurant with a hall to cater receptions for baptisms, weddings, and funerals. In fact, after Ms. Pie and I were married in Texas in the early ‘80’s, we had a week-after-the-wedding reception at Chris’. The place then fell off my map, so that was the last time I had gone.

Chris’ Corner survived over the years and remains locally-owned still functioning as restaurant, catering hall, and bar. Late one Saturday afternoon, I decided to see how their pizza had fared over the years. The place looked pretty much like it always had as I walked to it through my old neighborhood: a non-descript, single-story building nestled alone on the corner under a patch of trees. At the front door, there is a restaurant entrance on the left.  I went through the one for the bar on the right and grabbed a seat at the large square bar.  It was just the owner and I until a woman stopped in for a mid-day beer. We three soon discussed the woes of Eli Manning and the then 0-6 New York Giants while the television blared in the background.

I ordered a chicken Caesar salad to kick things off which surprisingly turned out to be by far the best one I have ever had—fresh, tasty, and simply out-of-this world delicious! I followed it up with my first “bar pie” in who knows when. A bar pie is a Jersey tradition—a pizza for you to eat while you sit at the bar nursing a beer. Oddly, their bar pies were available in both thick and thin. Mine of course would be a thin plain cheese. It cost $6.95 and was just the size I expected—10-inches cut into eight small slices served on a silver platter. 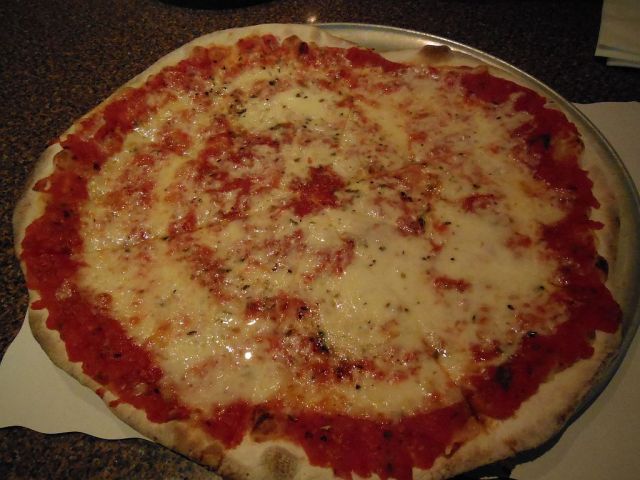 Sadly, my bar pie wouldn’t be as great as my salad. It looked much whiter on top than usual and was covered with much more cheese than necessary. There was a nice thin crust on both the bottom and around the ends. The heavy cheese and thin crust did not pair well together, however. The slices were too heavy and cheese would slide off the crust while I ate.  The real downfall of this pie was the disappointing taste of both the cheese and the tomato sauce. Despite undetectable traces of oregano, the taste was bland and uninviting, lingering unpleasantly on my tongue. The crust on the other hand was well-cooked and had a delightful chewy taste. Somewhat reluctantly, I finished my pie immediately making a note not to have it again.

To our dismay, both places and things change over times.  While Chris’ Corner has kept its look and feel, their pizza has changed for the worse. With so much great pizza in Bayonne, I doubt that I will find my way back there unless someone I know in Bayonne has a baby, marries, or dies!