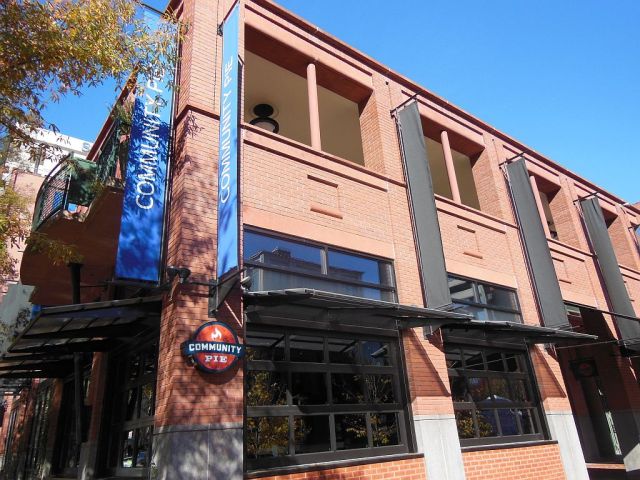 The Snob’s alter, Music City Mike, was on a road trip that happened to pass through Chattanooga around lunch time. Not without trying, my travelling companion and respected foodie, the Clayman, failed to find us a convenient pizza stop. So, we settled for some Mexican at Taqueria Jalisco, an easy on and off from I-40 that turned out to be a fabulous find.  Not wanting to give up claiming some new Snob territory, however, I turned to my trusty Pizza Compass to see if we could find a quick slice nearby.

As good luck would have it, the dial revealed that we were only a short distance from the Local Slice pizza truck. Said luck ran out when we reached it just in time to see its keeper shut her down. He did manage to tell us in the midst of our misfortune that they had the best pie in town–wasted words since he’d now have to wait for his review from the Snob.

Fortunately, in my walk back to the car, I spotted Community Pie.  I was about to turn around when I saw their sandwich board hawking Neapolitan Pizza by the slice.  Not interested.  But, right behind it was another sign—this one with the magic words “New York Style Pizza by the Slice.” 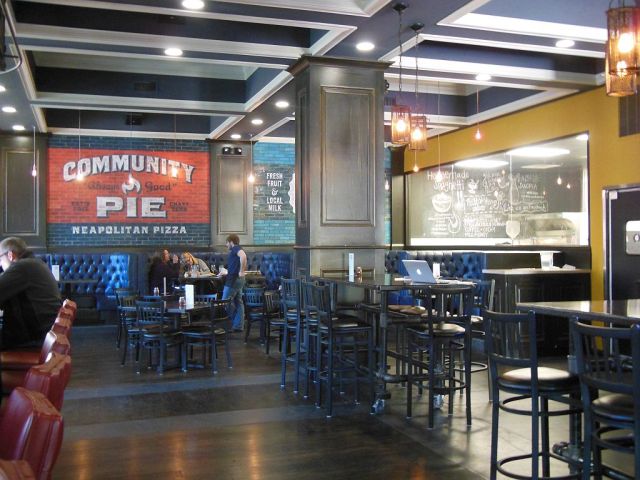 Only open since 2012, Community sits smack dab in the middle of downtown on the front corner of modern building complex. A wide open barroom/restaurant kind of place, my running buddy and I took seats at the bar. While eyeing the menus, Arlee, our friendly barkeep, told us that they just started making NY-style three days ago. Confident of their new skill, the menu was already laid out with Neapolitan pie on the left and the real stuff on the right. I ordered my plain cheese ($3.00) while the Clayman put a pepperoni addition on his. 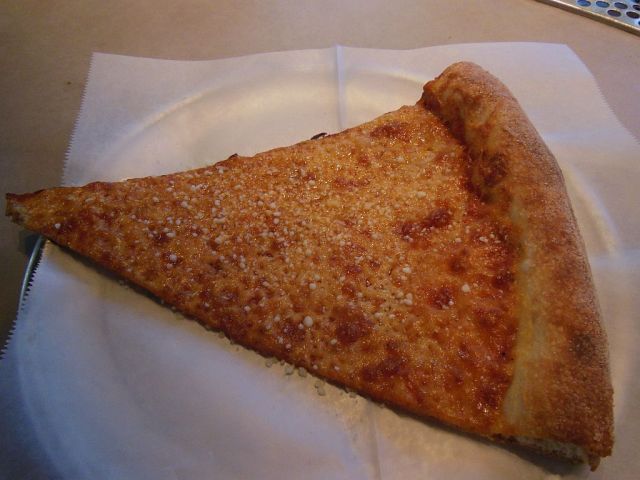 It didn’t take long for our slices, and man, they sure looked great.  As far as pie construction went, it looked like the Community folks studied NY-Pie making well. The piping hot slices looked trim, slim and crispy—but perhaps a little bit lighter on cheese and tomato sauce than expected. Mine was a delightfully delicious slice with its tasty chewy crust really standing out. The cheese and sauce were fresh and flavorful with a light layer of oil added to enhance the taste.

There was, however, an out-of-the ordinary something sprinkled on top that was white and strong-smelling.  An alarm soon went off in my mouth telling me that the foreign matter on top was Romano cheese. This un-requested additive was rather strong-tasting, and by Snob standards should have been a special request as opposed to a standard feature. Other than this, I was quite impressed with Community’s slice. The Clayman enjoyed his much better after he removed the peps which he described as overcooked and distracting.  He later said that he now understands why the Snob orders plain slices!

The New York-style cheese slice at Community Pie is certainly one that I’d order again—however, not without adding the words “Hold the Romano!” Striking this extra pungent cheese taste from their slice would make it a pretty darn good one.