Mike’s Pizzeria in Bayonne, NJ – A Great Name and a Great Slice 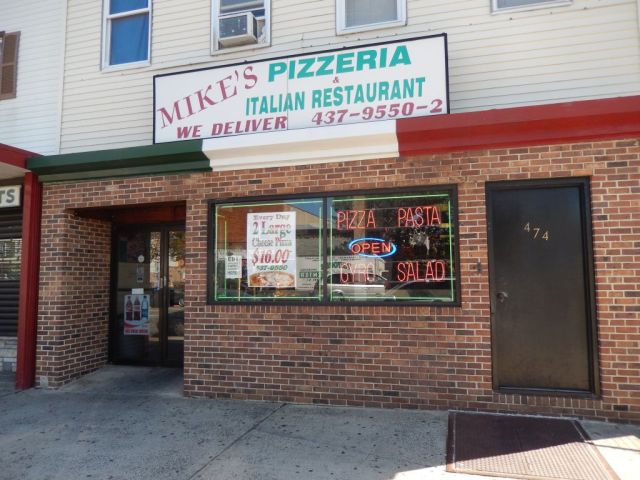 Yes, I found another great pizza place in my hometown between the bays! This one even has a name that I could relate to: Mike’s Pizzeria & Italian Restaurant.

I was back home on a Sunday afternoon, and before the kickoff of the Giants game, I got hungry for a slice. Eagerly seeking out something new to the local scene since I lived here in the 70s, I found Mike’s, a pizza place as Jersey as a toll booth and as Italian as an eggplant parm.

Just a block west of Broadway, Avenue C is the city’s second most active thoroughfare, and Mike’s sits in a midtown storefront on its east side. Open noon to midnight, I caught Mike’s on the early side while things were slow except for a flurry of pre-game deliveries. I paid the price for my early arrival when Mike himself caught me snapping some photos before I indulged. Never wanting to out myself as the Snob, I got out of this one by explaining my love for pizza, and how I was a visitor thrilled to find a pizza joint named after myself.

I finally made my way inside to order a plain cheese slice ($1.75) with my English breaking the steady flow of Italian tongue. Surprisingly, the available slices were hidden from my view, but nonetheless were there in waiting.  There were things on which to dine other than pizza along the usual lines of pasta, salads and sandwiches.

My slice got quite a long reheat in the conventional oven behind the counter while I waited at a table in the small room. Upon delivery it looked classic although it was a little wider with more cheese than usual. It was also less crisp than I would have liked. But it was overall delicious and tastefully seasoned with oregano.

Although I quite enjoyed it, something I grabbed hold of today was how the combination of extra cheese and extra heat can make a slice difficult to eat. That hot cheese just has a way of being unfriendly to your mouth. Keeping a slice trim and thin still lets you toast it way up while still keeping it easy to get down.

It’s great that my namesake pizza joint makes a great classic old school slice. A little less cheese and a little more crispness would have taken this tasty treat to the top. While there are a lot of great other pizza choices in Bayonne, my namesake Mike does a great job of serving his neighborhood.