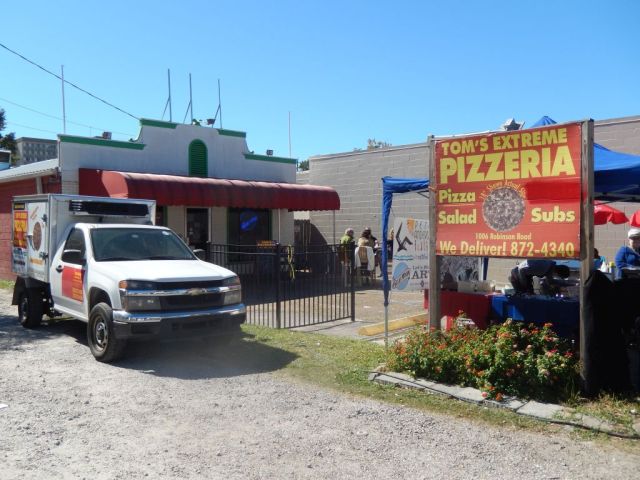 One of the thrills of being The Pizza Snob is my quest to discover the art of fine pizza-making in unexpected parts of the country. It happens–whether through the efforts of a daring local upstart, or more likely by a former apprentice migrating from Manhattan or Brooklyn to an underserved lower rent district somewhere deep in America.

It’s a risky exercise, and my exploits more often than not lead to disappointment. In fact, some like my good friend, the NYC Foodie, won’t even try. On a recent rendezvous in East Tennessee, he turned down an invitation from the Snob to explore with a simple “I don’t eat pizza out of New York City.”

Well, early last winter, business took me to uncharted Biloxi, MS. Since there was time for leisure on the weekend, I brought Mrs. Pie along. We each did our own advance prep—me for pizza and her for activities. My investigation turned up no desirable leads, including the uninviting Biloxi bar that named its pizzas after Led Zeppelin songs!  I pretty much decided that this would be a pizza-less journey for the Snob.

Mrs. Pie did discover the Peter Anderson Arts & Crafts Festival in neighboring Ocean Springs which turned out to be one of the biggest of these things I had ever seen! And as chance would have it, while walking through the miles and miles of arts and crafts booths overtaking the main shopping drag, I came across a sidewalk sign for Tom’s Extreme Pizzeria. 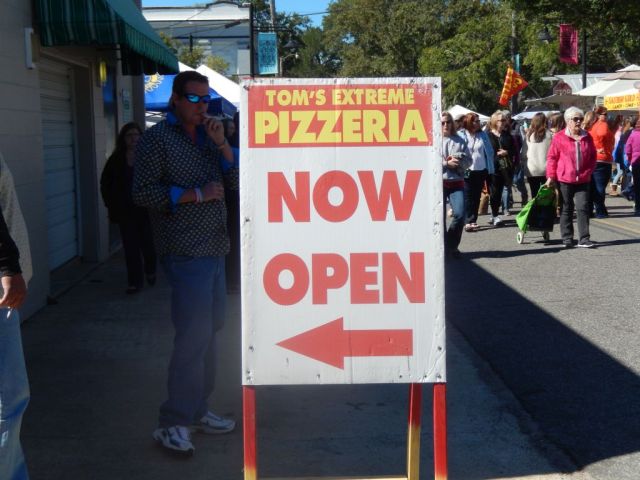 I walked over to their free-standing building to find Tom’s not conducive to anything quick—no slices and like everyplace else it was packed. For me to sample, I would have to get a table and order an 8-inch pie since they did not sell slices. Glancing at some of the patron’s pizza, I wasn’t enticed either. It didn’t look worthy of my time, and Mrs. Pie also wasn’t gonna wait just so I could eat some bad pizza to write about.

But, lo and behold, Tom’s had a special booth out front for the Festival that was selling beer and slices. Pizza journalism would not get shut out.

My endeavor commenced rather skeptically since these slices were obviously made some time ago, and there was no reheat apparatus available out there on the sidewalk. Their scant remaining selection of pizza slices was simply sitting covered in a silver buffet style serving dish. Worse yet, all they had left was peperoni, and everyone knows that the Snob doesn’t do ronis!

I decided to get a slice ($3.00) and just pluck the ronis off. Doing this left their greasy trail behind atop a chunky-looking slice that already looked way too juicy with oil. I knew that this wouldn’t be anywhere near a perfect pizza adventure, but quite surprisingly, it wound up being a lot better than I thought it would.

While my lukewarm slice was much too cheesy and oily for my liking, strangely enough, the crust was sturdy and crisp. But the real surprise was how all the sensors in my pizza taste buds managed to be touched. I was able to find some delight and satisfaction from the familiar refreshing tastes of tomato sauce and cheese.

It may be a stretch rating this slice so high, but on the other hand, Tom’s certainly isn’t getting the chance to put their best effort forward in a situation like this.

I guess the NYC Foodie was right, and I shouldn’t have been expecting perfect pizza in Southern Mississippi in the first place. But nothing ventured, nothing gained, and nothing to blog about.

I left Biloxi looking forward to my upcoming trip to New York City.