Last winter, on a dark, damp and dreary Friday evening, Mrs. Pie and I found ourselves in the Garden State with no plans whatsoever. Perhaps asking way too much of her for the sake of this Pizza Snob business, I suggested a leisurely drive to visit a place I had bookmarked called Lodi Pizza. This joint got on my dance card a few years ago when it showed up in a Tri-State Area pizza poll.

Lodi Pizza is nothing more than a small shack that sits off the westbound lane of busy US 46 just a few miles west of its intersection with Route 17—undoubtedly one of the most gnarly traffic spots in the USA. Oddly enough, it’s an easy exit off the highway, and there is plenty of free parking out in front.

The place was well-worn and looks to have been around quite a while. I started getting signals from Mrs. Pie that her idea of a night out on the town was more than just visiting to an old rundown pizza joint. Like we used to say, this was not the kind of place you’d take your date to after the prom!

The place has two small rooms and we grabbed one of several booths facing the counter in the main area. There was no mistake about being in Jersey with the walls full of Sopranos and Sinatra. There is also a big fat ATM in the main room since Lodi Pizza is cash-only.

At the counter to order, I noticed that there were plenty of $2.00 slices (regular and Sicilian) available. I summoned up one of each for me and a regular for the Mrs. The plastic menu board above the oven listed some Italian dishes, salads, subs and surprisingly soup. We chose to precede our pizza with a bowl of lentil soup—one of our fave dishes.

I first made a visit to the restroom which turned out to be a strange journey back outside through a fence, around the building and through the kitchen! 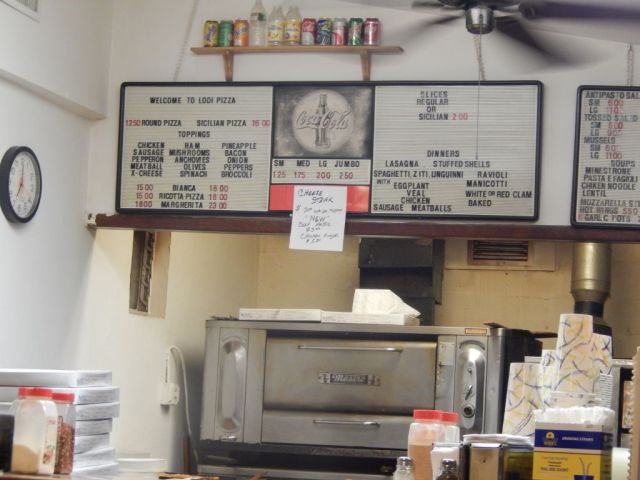 Our slices were reheated quickly, and they made a great first impression looking to be rock solid, firm and crunchy like the Snob prefers. They were however unusually in the shape of small equilateral triangles. The first bite instantly brought a smile to my face. The tomato sauce was bright and tangy with a good dosing of oregano. The lush tasty mozzarella held tightly to the crust which turned out to be firm without being overly charred or crunchy. The crust however was dry and tasted a bit pale, possibly lacking salt.

As an aside, the Sicilian was enjoyable although not much different than the regular slice other than the extra dough required to fulfil its traditional thicker construction. While we still lingered around finishing our soup, I ordered a second slice which for whatever reason did not meet the standards of my first. It was quite oily with loose cheese, and was not as tasty as that first slice.

Despite its lack of flair and the surprising letdown in standards for my second slice, Lodi is a neat old Jersey pizza joint that is worthy of a stop if you are in the area. It’s a great slice that I believe you will enjoy.