Before closing out this year’s Florida Panhandle vacation, the Pizza Snob had some unfinished business over at Panama Pizzeria. Last year’s adventure there resulted in a rather comical tale involving an extremely over-cooked slice that was in no way meant for human consumption. In an act of mercy to the owner’s kind request, the Snob withdrew his nasty review with a promise to return next season. So, with the bad memory of the last visit still burnt freshly in my mind, Mrs. Pie joined me on my return visit one afternoon for a late lunch

After we were seated, I scoped out the counter to find only a lone plain single cheese slice that had been sitting there for who knows how long. Thoughts of disappointment began running through my head. Was PP about to be set up for another slice-serving failure? Would my order of a single slice once again result in the delivery of something less than PP’s best? Should I order a whole pie just to give them a fair chance?

I decided to test their service skills and order just a single slice, since after all, that was where they failed last time. I would also be testing the sign on the counter that read “Service may vary according to my mood and your attitude.”

Well, our sweet waitress must have been in a good mood and my attitude just right. Since following our orders of a chicken dish and a salad, my request for a slice made her peek at the counter and retort:  “Would you mind waiting 7-8 minutes for a fresh pie to come out of the oven.” Hallelujah! PP would be giving the Snob their best shot.

Well, in all honestly, the chicken and the salad were not the best we have ever had—decent but nothing to rave about. Unfortunately, not much more could be said about the pizza slice. It was tasty, but nothing worth driving into the next city for. 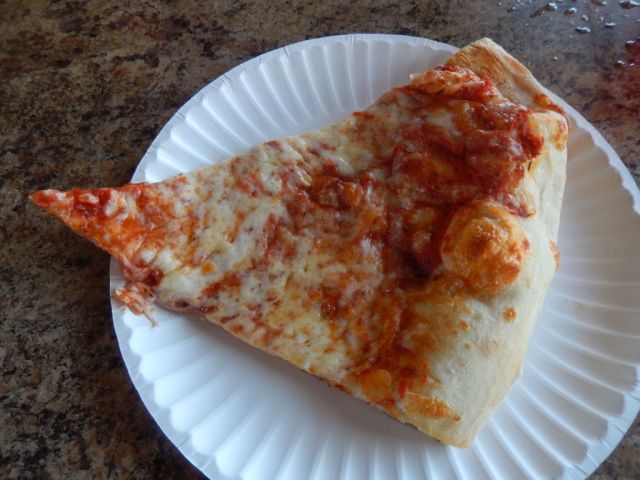 First off, it was an irregular cut slice which always freaks me out. The end crust was also puffier than usual. At first bite though it proved to be tasty and served at a perfect temperature for eating. The cheese and tomato sauce both tasted fine although the sauce may have been a little tart to my tongue. While the crust was not really charred or crisp and could have been a bit thinner, it did have a nice fresh perky taste to it.

Mrs. Snob couldn’t help herself and took a few bites. She agreed on my rating and added her two cents about how places in the South just don’t get the crust right.

So all in all, Panama Pizzeria redeemed itself with high marks in the service department. As for their pizza, it’s good and one that I would surely never refuse, but it was not worthy of our journey from 30-A.