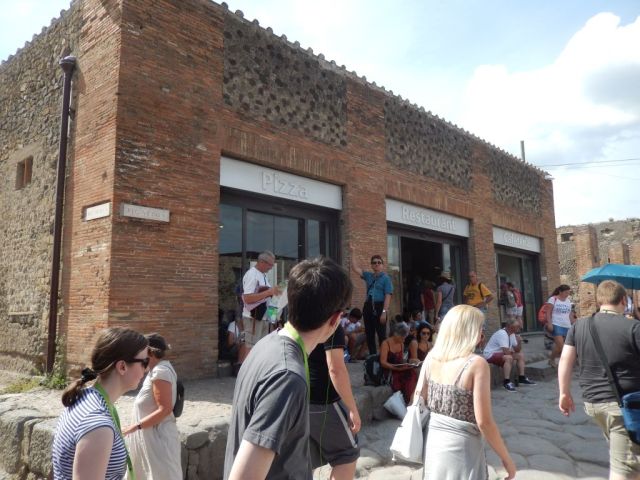 During our recent stay in Rome, Mrs. Pie and I planned a day trip to see the famous ruins of the ancient city of Pompeii. This side trip would take us through Napoli, or Naples, which is the birthplace of pizza. Naples has a reputation of being a somewhat of a rough gritty city and it does not get the most favorable reviews from tourists. Nonetheless, it was an opportunity the Pizza Snob could not resist. So we planned on spending just enough time there to grab a quick dinnertime pizza on our way back to Rome.

The first leg of our journey to the ruins was an hour-long jaunt on a high-speed Trenitalia train from Rome to Naples. This combination of luxury and speed (300 km or 186 miles per hour) made us realize how poor mass transit in the USA looks in comparison. From Naples, we took a much more familiar-looking crowded and graffiti-laced train to Pompeii. 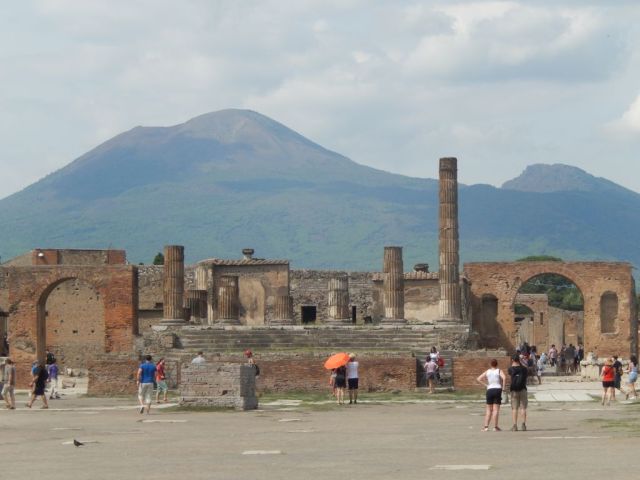 Visiting the ancient ruins of a city destroyed in 79 A.D. by the volcanic ash and pumice from Mount Vesuvius was a remarkable experience. But, imagine my surprise when in the middle of touring all the rubble, I spotted a sign for “Pizza!” I guess I can understand the need for some refreshments during one’s tour, but it really did smack of bad taste to create a snack bar in the middle of ancient Pompeii. To further belittle this bad choice, they either made the building to fit in with the ancient motif or worse yet, tacked it on to an existing surviving ancient structure.

All shame aside, I simply could not resist adding this pizza place to my list. I also anticipated that this being Italy, that the pizza wouldn’t be that bad. However I soon learned that snack bar pizza is still snack pizza, no matter where it is served: at a sports stadium, museum or even some ancient Roman ruins. 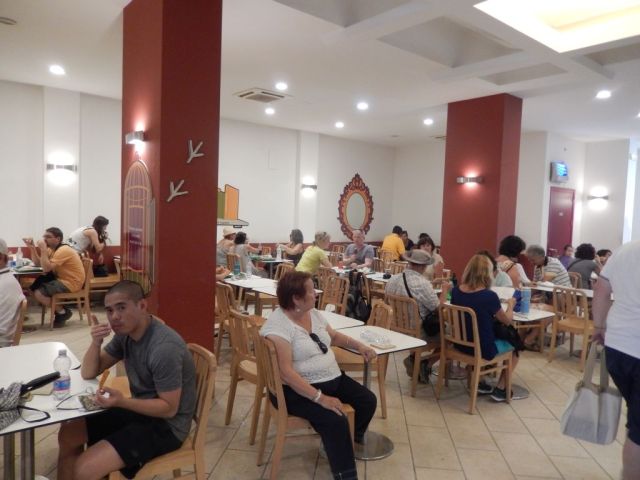 Inside the rather large facility, I found the pizza section and spotted some rather large Margherita slices under glass at the counter that sold for €3.90.  In true concession fashion, I would also have to first struggle with some horribly slow service to get my slice. This just about drove Mrs. Pie nuts since she was ready to get back to our tour. Their process was the usual fast-serve Italian method of paying at the register and then bringing your receipt to the serving end of the counter. Since the lady on duty felt that cleaning the area behind the counter was more important than serving customers, the other dude on call was doing both duties. His method of operation was to first collect Euros from a few customers at a time and then move to the service area to dish out the pizza. 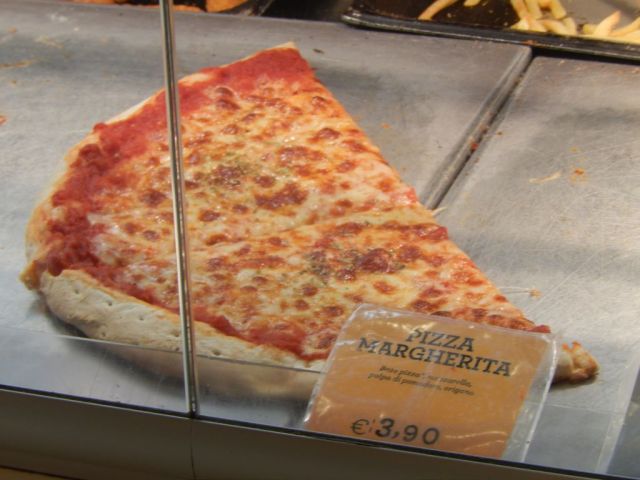 I finally got my slice which despite the fact that it was sitting there for who knows how long, the dude behind the counter did not think was necessary to reheat. Retreating to a table in the cafeteria section, I knew I was about to be disappointed. Surprisingly, I could not believe how much this large cold double-wide slice reminded me of America’s own Papa John’s pizza. It was also about as dull, doughy and bland-tasting as one could possibly be—just like Papa John’s.  I then thought, “Could PJ’s or some American firm actually gotten the contract at this facility?” Or is there also bad pizza to be found in Italy? (I later learned that this place was run by Autogrill, an Italian catering firm.)

Cold, dry and limp, I quit before finishing this dreadful slice. At least it was edible for a few minutes. Part of the irony of eating at this place was the thought that the best pizza place in my hometown of Bayonne, New Jersey is at a place called Pompei Pizza! Wait until the folks back home hear about this other Pompeii!