A Quick Stop for a Square Slice at Panini Pizze e Vini in Florence, Italy 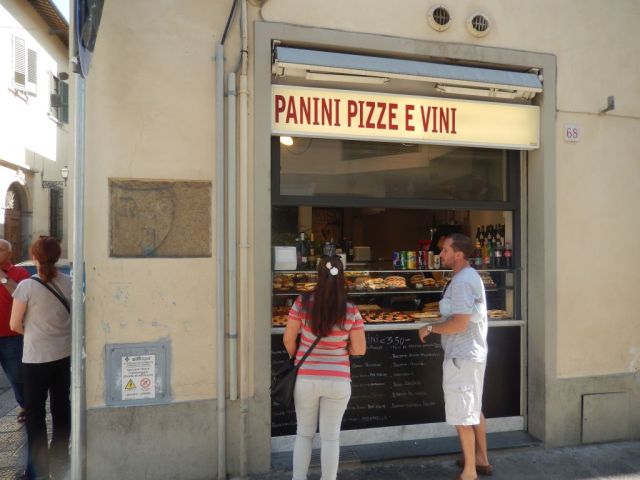 It was a Friday in Florence, and the Pizza Snob had no pizza plans on the books. So in order to keep my “Pizza everyday in Italy” streak alive, I decided to grab something on the street in between our visits to the Ufizzi and Accademia galleries. The quick timing of this decision led me to an open-air street corner shop with the simple name of Panini Pizze e Vini (translates to sandwiches, pizza and wine).

I walked up to their sidewalk window where I saw an assortment of different types of pizza slabs in trays with a €3.00 sign. I spotted one with just cheese and sauce which I ordered adding a special request for the piece with two sides of end crust. Without asking, they put it into a real oven and toasted it for a few minutes which gave it a nice warm taste and a crisp bottom.

My slice would best be described in American terms as a Sicilian. It had a thick, but crisp, bread-like base and a full layer of cheese atop the tomato sauce.

They put my piece in a small bag to go. With no place to sit, Mrs. Pie (who opted for a Panini) and I took our wares to a sit on a doorstep in a nearby piazza where we dined while watching the passersby. 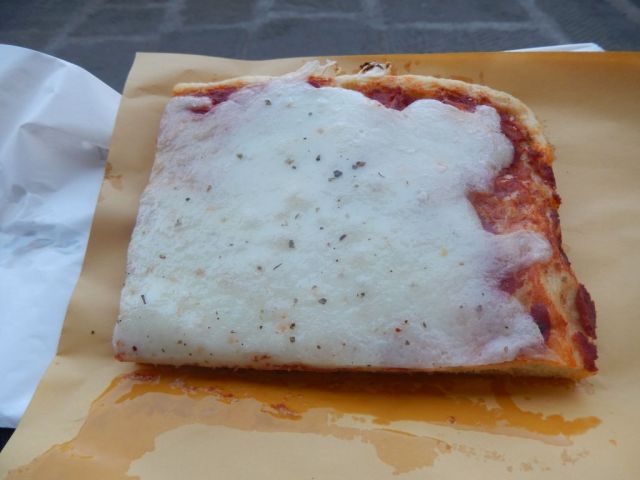 The slice wound up being not too hot and just ready to eat. It was about 3/8 of an inch thick and nice and fluffy in the space between the cheese and sauce on top and its crisper bottom. Outside of the edges, it wasn’t overall crisp but it was good and chewy. As witnessed by my napkin, the slice was somewhat oily, but it was just enough to be quite flavorful. It was a good light eat and turned out to be a very delicious snack.

While this place was nothing unique to see on an Italian street, it is a fine example of what you can find out there to get a quick, solid delicious slab of pizza. For what they do, Panini Pizze e Vini gets a high mark from the Pizza Snob. Job well done.