Plaza Pizza – Home of the “Power Slice” in Secaucus (NJ)

On an extended stay in my old hometown of Bayonne, I was on a short leash while taking care of things at the family compound. Seeking a brief respite, my good old brother graced me with a night off to spend 4 hours with my home state’s favorite son, Bruce Springsteen in the Meadowlands. Since any journey in the Pizza State means a chance to try new pie, I directed my search to the city of Secaucus which lies in the vicinity of MetLife Stadium. Looking to be the most traditional place, so I set Plaza Pizza as my destination.

While the official pronunciation of the city is the more drawn out “SEE-kaw-kus,” the more concise “SA-kaw-kus” is more what I am used to hearing from fellow Jerseyites. This home for about 15,000 folks boomed in the late 70s with the development of its Harmon Cove section where a slug of new homes and corporate facilities were developed from “somewhere in the swamps of Jersey.”

I headed up the Turnpike to Exit 16-E where I was greeted by a Plaza Pizza sign just below an arrow pointing to Secaucus. A quick right turn off busy Patterson Plank Road in the middle of downtown led to the CVS Shopping Center where the slick-looking Plaza Pizza resides. Parking in the center’s big lot, I was surprised to see that I was just a stone’s through away from major highway Route 3.

Showing little sign of age in its clean and modern large square space, nonetheless, Plaza showed sure signs of being a true Jersey pizza joint. With bustling workers behind a counter full of pizza slices and a menu covering all the angles of what you’d expect in a place like this, I suddenly felt safe and sure about this place being good. I then waited on my pair of slices pondering how I would soon be spending half of a workday with Mr. Springsteen.

My two cheese slices ($2.25 each) came from atop those at the counter. I then saw something that I have never seen before during the reheating process—they were placed together in the CPO (“conventional pizza oven”) atop a small sheet of aluminum foil. This same foil would later accompany the slices on their white paper plate. As they went into the CPO, I noticed two things: the slices looked oily and huge!

As soon as I started to eat this truly masterful pizza, I labelled this one in my mind as a “Power Slice.” It was solid, big and long. Expertly cooked so as to hold it all together quite firmly, it was blessed with a strong char on its bottom. Said char also gave it a memorable toasty taste that hit the Snob’s sweet spot making things wonderfully flavorful. 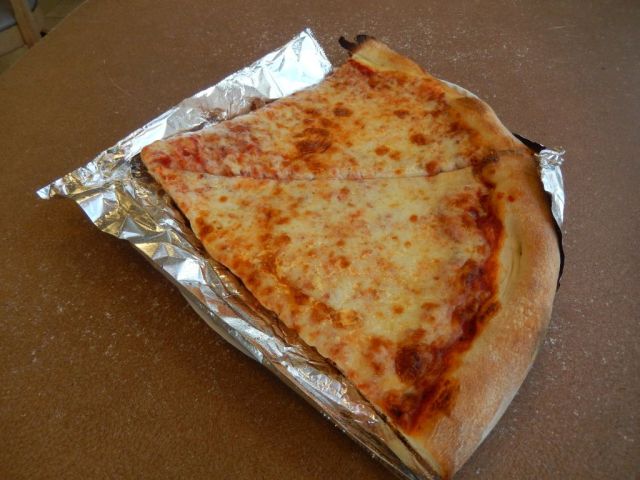 The Snob in me tried its hardest, but I just couldn’t find anything wrong with Plaza’s pizza. The early warning on the oil never problematically panned out, and it wound up being perfectly balanced and far from being dry. And while there looked to be a lot of cheese on the slices (delicious by the way), I had to keep in mind how big these suckers were! Kudos to the nice touch of oregano.

Plaza Pizza makes a truly worthy slice and is a place I would surely send someone to. Heading into the city from Western Jersey? It’s just a simple turn off Route 3 to stop for a quick slice. You’ll love it.

← Bayview Pizzeria in Bayonne, NJ—Not-So-Special Slice by the Bay
Fiori’s Pizzaria in Pittsburgh—Original Pizza with an Old School Charm →