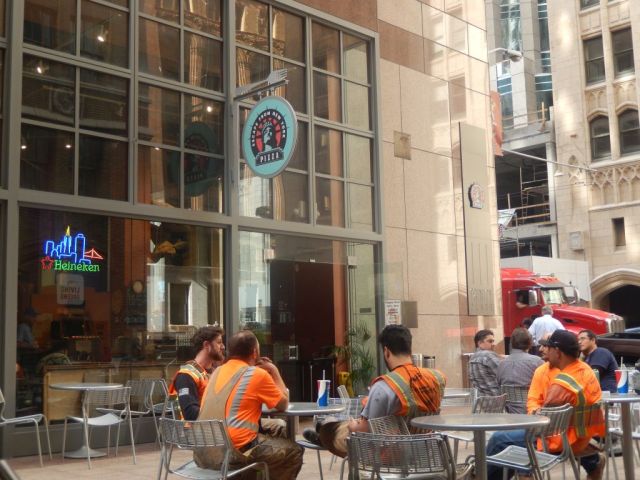 It was our second day in San Fran, and Mrs. Pie wanted to shop downtown in the cool swanky mall on Market Street. Still on the early side of lunch time on what for most was a working day, Yelp told me that I was close to one of the Escape from New York Pizza locations. They have six (Mission, Castro, Polk, Haight, Downtown and Soma), and I was near the Downtown one which is in the Financial District.

I had a bit of a hike ahead of me, but I made my way through the city streets until I arrived at Escape’s address. Coming in blind, I did not actually see it until I turned the corner into an outdoor courtyard between two tall office buildings. Escape has a slick looking room in a prime location with outdoor seating to boot.

Escape’s multiple locations made me suspect that it’s pizza would be a bit of the run-of-the-mill assembly line variety. Sadly, this would turn out to be the case with the disinterested and half-asleep look of the people working behind the counter a foreshadowing. 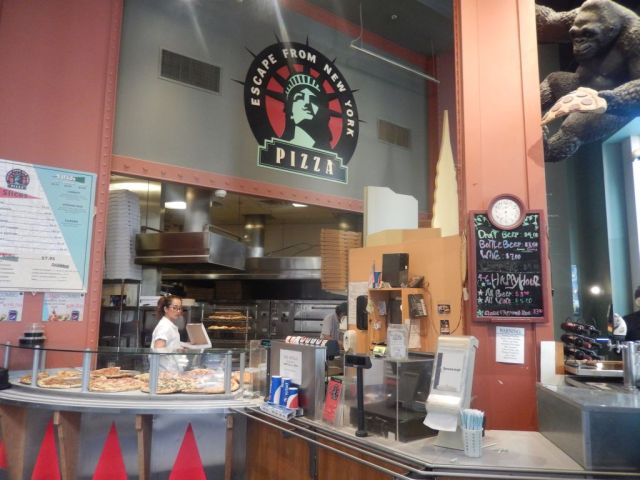 Going for a single plain cheese slice (at the downtown price of $3.95 after tax), it arrived after a short spell in the oven looking overly white in its color. Not only is this an indication of a poor blending of ingredients with the cheese too high in the mix, like some other great pizza philosopher once said “the cheese is so cheap they don’t mind giving it away!”

The slice was of a decent size, but after closer inspection, I determined it was slightly heavy on both cheese and dough—at least for my liking. The char on the bottom resulted in a good firmness on the bottom crust. The crust was actually this slice’s best component part. However, the slice did fail again in terms of not being served hot enough. It was not heated all the way through and suffered as a result. 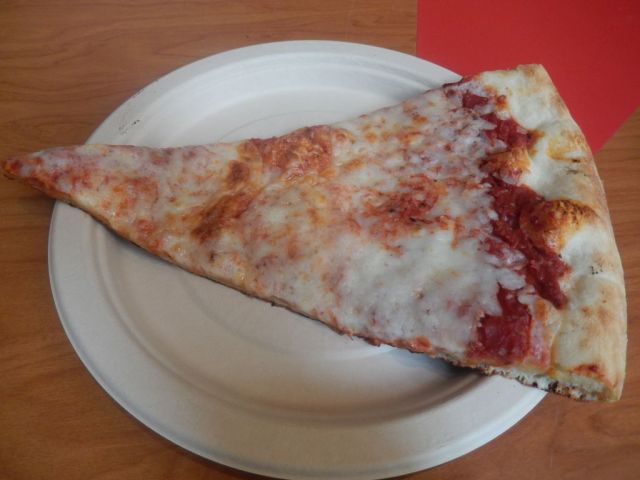 Overall, this slice reminded me of some of those that I had in New York City that tried their best to look the part, but in the end were just dull, average and pedestrian. Missing was the convergence of taste that makes a slice of pizza truly memorable and special. There was also a quirky aftertaste from the tomato sauce that I didn’t particularly care for. Sorry, but the Snob barley gives Escape a passing grade. It’s not a place I’d recommend. 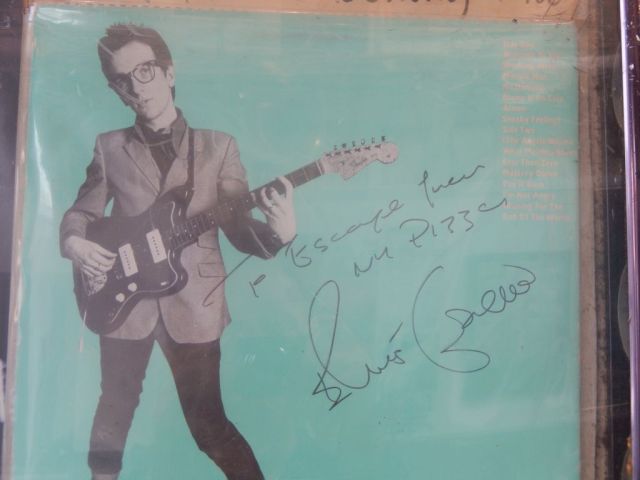 PS—Later in the week, I was walking through the Haight and stuck my head inside Escape’s location there. I was so glad that I did since they have neatly adapted the room to the rock music history tied to this area. Here’s a picture of something cool from their wall. How I love it when my worlds of music and pizza collide! To the unfamiliar, that’s Elvis Costello who’s first footprints on US soil were in SF—a city he has always held dearly. Not sure where he stands on pizza though!