Jonesing for Pie in All the Wrong Places – Part Two: Famous Famiglia

A few years ago when I was just a young pizza snob, I wrote the first half of a theme piece picking on two seemingly ubiquitous pizza chains: Sbarro and Famous Famiglia. After giving my thoughts on Sbarro in the previous blog post, it’s now time to go after Famous Famiglia.

What both have in common is their emphasis on location. They hope to capitalize on your pizza craving finding you in a situation with no other alternatives. You are likely to come across a Famiglia in the airport or perhaps at Yankee Stadium. But, let’s get one thing straight, like Sbarro, this just isn’t great New York style pizza. Let us investigate however what makes us succumb to these urges to settle for less than the best.

Recently, Mrs. Pie shared a Splendid Table interview with famous America chef, Justin Warner, that discussed man’s insatiable urge for pizza. In what they coined “the law of peanut butter and jelly,” here’s what Warner had to say:

Under full control of my desire not to succumb to Warner’s law, over a short period, I sampled the wares at three Famigilias: one in Midtown Manhattan and two others at the Nashville and LaGuardia airports. What is shocking is is how different these slices were. Have a look for yourself below.

Those two yellowy airport slices were truly awful. The Nashville slice was a putrid “puffy pie” and the one at La Guardia wasn’t much of an improvement. The slice in Midtown was much better, but still was way below my standards. At least this one in the City was well-executed and looked the part. However, in addition to being on the too-thick crust side, it was much flatter tasting than usual. The cheese and sauce just had something about them that made them fail as did the dry crust. There was no pride and joy in making this rather perfunctory slice.

A similar, but not so drastic diversity was also noted at Sbarro. While there I suspected inconsistent training and employee turnover as the cause, with Famiglia, it may also be a question of assimilation. Like the notorious Borg from Star Trek, does the sign in the photo below imply that they have a plan to unite all of the galaxy’s pizza joints into their collective? 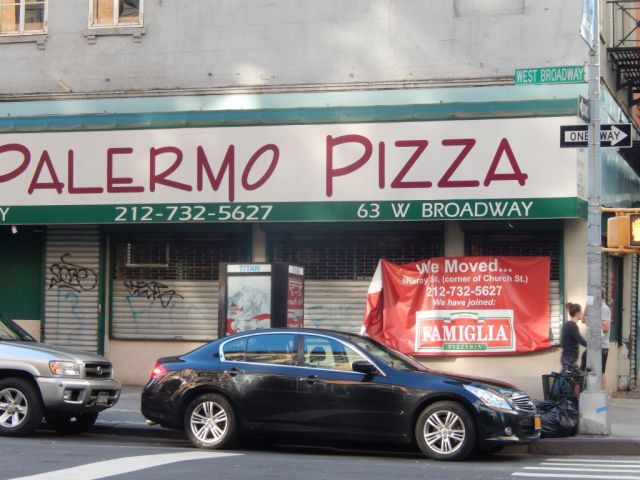 My fellow pizza lovers, resist those non-futile urges and don’t eat at these places. Support your local pizza joint. It only takes some patience to make your taste buds much happier. And New Yorkers, never take a friend there like Donald Trump shamefully once did with Sarah Palin. 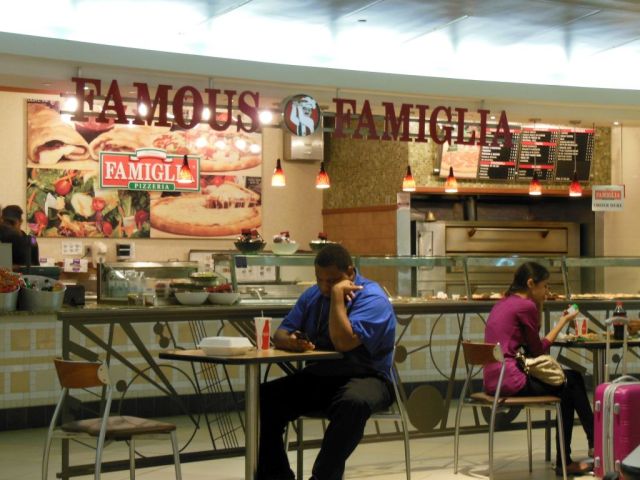 Disclaimer: These visits were made several years ago, so please forgive me if things somehow have changed. Somehow, I don’t suspect that they have. Also, while on its own I would have rated the Midtown location higher, I’m going with an overall lower rating for the chain in my never-ending effort to save the world from bad pizza.