New pizza discovery is quite often relationally-based. Therefore, it was only a matter of time before the Snob began attacking the slices in my brother’s current residence of Edison, NJ. The namesake of the “Wizard of Menlo Park” who gave us both the light bulb and recorded music, this mostly-suburban north-central Jersey town, is the state’s fifth largest. A town this size offers many pizza-pickings, and I chose to start at the rather different-sounding Brooklyn Boys Pizza & Deli.

Dad and I made the drive from Bayonne to meet my brother and his wife for what would be a late family lunch at Brooklyn Boys. Located in a strip center on a busy by-way, it’s quite a spiffy place inside with plenty of comfy tables at which to dine. There were several creatively-crafted varieties of pizza slices on the counter display. Their deli side was less evident, but nonetheless, this looked like a great place to get a sub sandwich. What also got my attention was the plateful of chocolate-laced cannoli shells sitting atop the counter. 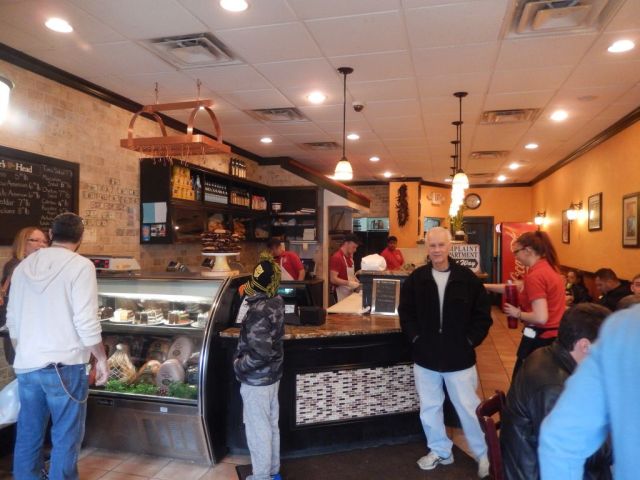 The menu calls them “Tomato Pies” so I queried our waitress who revealed nothing more than “the sauce was on top.” This was expected good news for me since I have seen some of the pies labeled this way to be absurdly without cheese. After sharing a tasty salad, our table quickly dove into our assortment of various types of slices, each served on its own small silver tray.

I did not deviate from my usual order of plain cheese slices and went after a pair. Timed until we finished our salad, I was taken with how artfully-crafted and appetizing they looked. The slices were as flat as pancakes, cut into perfectly-sized equilateral triangles. Solid and stiff as a board, the cheese was lightly layered below scattered round blotches of tomato sauce.

The bottom and flat end crust were thin and charred crisp much to my liking. While picking a slice up, it remained firm and my attempt at a fold was first met with a cracking of the end crust. My first taste reaction however was somewhat startling as the temperature was tepid making me that it should have been served hotter. However, the tantalizing taste soon took over, and I knew that I was eating something special.

My brother commented on how it’s nice to get something so different and so good and he was right. The Boys make a delightfully unique slice that is so light and tasty that you keep wanting more. The perfectly-charred crust full of cornmeal flakes was downright delicious as was the rich deep dark tomato sauce that sat above the light touch of Mozzarella.

Brooklyn Boys make a pizza that is worth seeking out. They also run a first-class shop with other enticing menu items and fabulous service. And, of course we tried and loved the cannoli, and of course we’ll be coming back! This place is worthy!