Heading back home to Music City through LaGuardia, I came upon the idea of looking for a pizza place on Manhattan’s Upper East Side. Totally unfamiliar with this area, all I had were impressions of it being a wealthy part of town. Doing my advance work, I was on to something about it being close to the airport. My target would be Nick’s Pizza on Second Avenue, just 4 miles away.

Described on-line as making a pie that was thin and crisp, no two adjectives get me more excited about pizza. While not exactly getting the complete feel for what I’d be getting into, it sure sounded better than the Ray’s that sits on the opposite side of the street that songwriter Tim Moore once memorialized.

Coming up from Jersey, it was a beautiful, but cold first day of spring when I drove up the FDR Drive taking in a beautiful view on both sides. Nick’s was close to the 96th Street exit, and despite there still being a lot of snow messing up the side streets, I found a free parking spot on 95th Street before taking the short walk back to the corner of 94th.

Their big sign said just “Nick’s” with the word “pizzeria” tucked to the side in smaller case. Maybe this was a foreshadowing to the fact that this place sees itself more as a restaurant than just a pizza place. Nonetheless, the first thing you see when you enter the moderately elegant wood and brick room were the twin wood-burning pizza ovens in the rear.

More of a residential than commercial neighborhood, I guess it was not much of a surprise that I was only the third customer dining for Monday lunch at 12:30pm. Taking a small two-seater table, I quickly chose a house salad ($7) and a small cheese pizza ($17) from a menu that was bold enough to point out “no slices.” When I said “plain cheese” my water affirmed with “Margherita?” which felt out-of-line with my expectations from the reviews I had seen.

My salad starter was much fancier than just your usual pizza joint iceberg lettuce and a slice of tomato. This was an exquisite and tastefully-garnished selection of thin mixed greens that I thoroughly enjoyed. About this time, I heard the diner next to me order the veal and I started to sense the downplay of the importance of pizza to Nick’s. 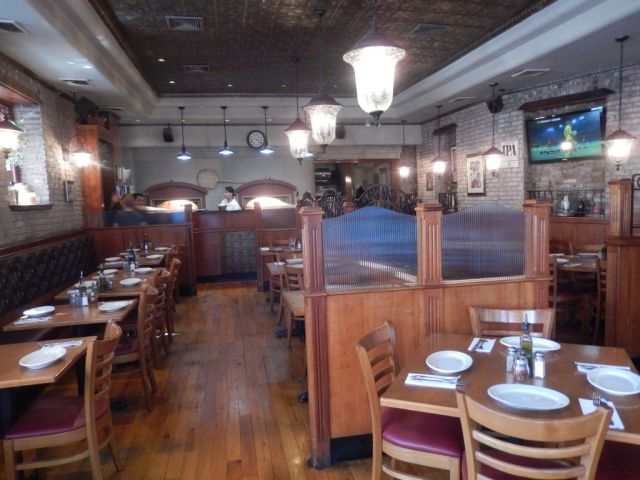 Nonetheless, the pizza came delivered on a platform and looked mighty pretty. It was about 12 inches in diameter cut into eight small slices. This pie was much thicker and crisper than any Margherita I have ever had. There were a handful of basil leaves on top of the swirl of tomato sauce and thick cheese with a squirt of olive oil in between. It had a thick end crust and the side closest to me was charred black. All in all, it had my interest.

It was served just right for eating and I wound up folding these little guys as I went along. While everything about this pie was somewhat satisfying, on the other hand there was just not anything special about it either. The sauce and cheese were fine, but there was no real attempt to jazz it up. The crisp crust however went a long way in making this a worthwhile experience. 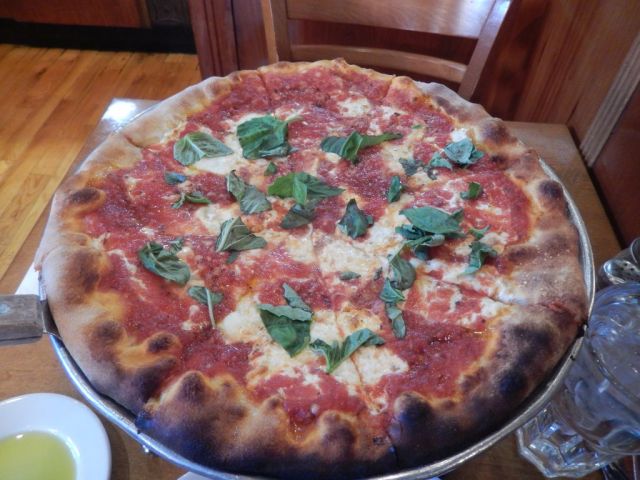 I came close to leaving two slices on my plate, then gave it to thinking about leaving just one and then finally wound up eating the whole thing. Near the end, its staying power went weak. Those last slices after cooling down were far from as good as when I got started and it was all hot and fresh.

Nick’s displayed a wall full of Zagat awards, but all they’ll be getting from the Pizza Snob is a passing grade. This is probably an outstanding neighborhood restaurant, but as for its pizza, it’s unexciting and nothing to go out of your way for. Nick’s also made for quite an expensive solo outing. I’d pass on the pizza.