Although I was a child of the 70s, I totally embraced the music and spirit of the Flower Power decade of the 60s for which San Francisco was the epicenter. So, for me, walking the streets of North Beach was a mind-blowing experience. One highlight was snorting down an Espresso named for the late Jefferson Airplane guitarist Paul Kantner at the classic Caffe Trieste coffee shop. Another was the square slice I grabbed at Golden Boy Pizza.

In a lucky accident, I walked by GB’s middle-of-the-block storefront where my eyes caught their classic finger-pointing sign and a line of folks looking for a lunchtime slice or two. In the biz since 1978, this cool place has a nifty walk-up window to order a quick slice and the Huey Lewis & the News-inspired slogan “Where It Is Hip to Be Square.”

Coming back around 1:30pm after the long lunch line had died down, I chose to eat my plain cheese square (cash-only: $3.25 for a slice, $39 for a sheet) inside. Still very crowded, the entire counter on the right wall was full. I managed to fine a lone seat at the long bar on the other side where they also serve some crafty beers and wines on tap. Food-wise, there is just square pizza with six offerings to choose from.

The inside of GB is a trip and is more a throw-back to the punk rock 70’s than the hippie 60s. The walls and rest rooms are covered with stickers and graffiti like you’d find in a grungy old rock club. They were even blasting punk rock music while I ate. Open until 2:30 am on the weekends, I suspect GBs get a pretty wild late-night crowd. As for lunch time, you won’t see a lot of suits and ties there, but more of a working-class crowd.

My square slice was reheated in the front room in a small oven along with a few other slices. It was my lucky day, and my slice was a corner one thus giving me two edges of good solid crisp crust. Somewhat smaller than I expected, I was also given a totally unnecessary knife and fork. GB refers to their pizza as focaccia which is fair since it’s not quite like a traditional Sicilian square. But man, it was really exceptionally good.

Not overly thick, it was only about 3/4 of the thickness of a standard Sicilian. The textured crust was deliciously chewy and slightly charred. Lightly cheesed and sauced, it was pleasantly not over-bearing like many a befallen square. GB’s slice was a chewing extravaganza that I ate in a flash! 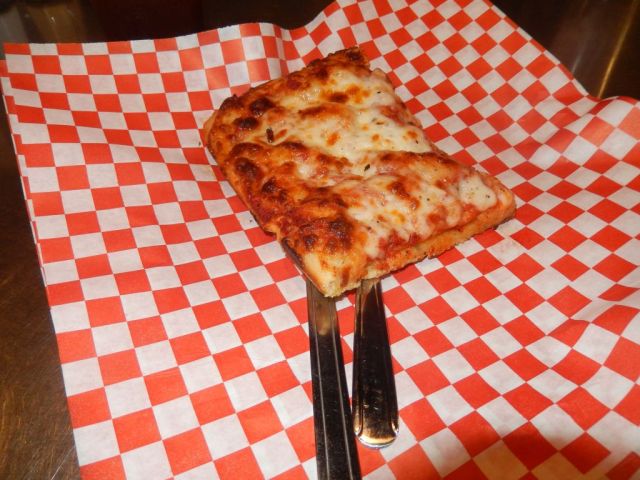 As I left GB, I heard a mother tell her two small children “That was yummy in the tummy!” I sure agree. While the Golden Boy square may not be the best slice of pizza you’ll find in San Francisco, it is a darn good one. Most certainly, this place is a fun lively North Beach landmark that you must absolutely must visit.

← Jersey Restaurant—Pizza with a Taste of Trenton in San Francisco
New York City’s Rubirosa Ristorante– The Best Pizza I Have Ever Had! →