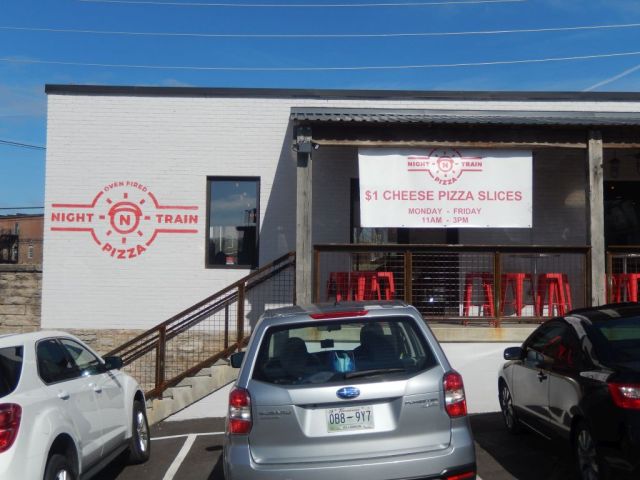 Nashville’s Gulch area is perhaps one of its most blatant examples of the City’s quick and slick tourist-centric growth. While there are some places in the Gulch that I enjoy, I suspect most locals like me, would rather hang in Hillsboro Village or East Nashville’s Five Points. And if the Gulch growth ever messes with the landmark bluegrass stallion The Station Inn, I’ll boycott it for life! In seeing the news about the opening of Night Train Pizza, I was surprised to see that the Gulch has now stretched out to start devouring the short section of 9th Avenue above Division where it sits.

I called upon one of my old local pizza pals to accompany me for a Monday lunch at Night Train. We found the place in a rather plain concrete building at the end of the block and nicked a spot in their adjacent parking lot. Although it was still a bit too cold to do so, there were a few outdoor tables. We moseyed inside the room that felt like a half bar/half pizza joint and grabbed a table while the talking heads on TV reminisced about yesterday’s Super Bowl. 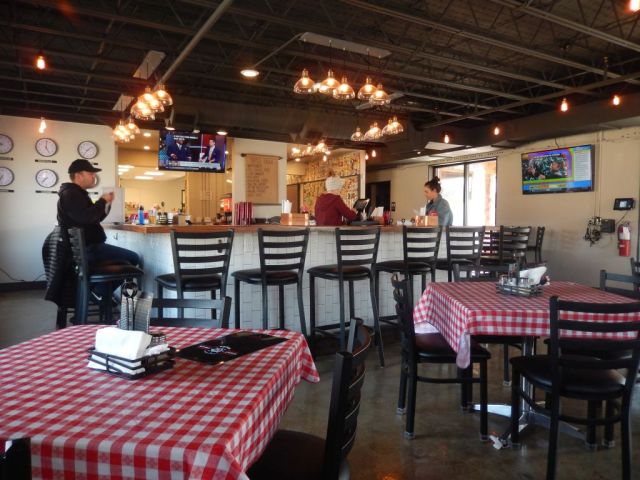 Menus in hand, we noticed that they went both New York and Detroit in their styles. Although it’s not unusual for me to be unobservant, it wasn’t until paying the bill that I realized that I missed the big outdoor banner advertising $1 bargain slices M-F from 11 to 3. So, with a small salad to start, I went after a slice pair of plain cheese New York and my running buddy went Detroit.

My slices were delivered on a silver tray and looked somewhat enticing although they looked as if they were unrelated to one another—sort of slices from a different pie. One was fat and short and the other was skinny and long. Shape aside, the tomato sauce looked bright and rich, and they were desirably very thin. There were traces of some sprinkled Parmesan on one and some mutantly-scattered Mozzarella on the other. All looked encouraging. 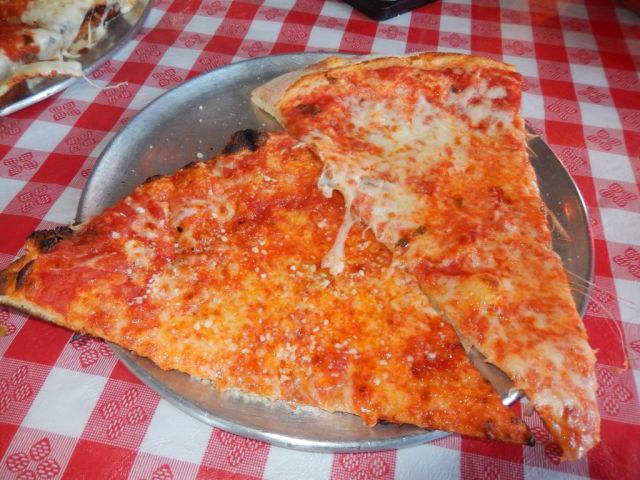 But alas, as soon as I picked one up it flopped like a dead fish. How they reheated these slices to make them so mushy and un-crisp remains a mystery to me. It was like they used a microwave instead of the big wood-burning pizza oven in the kitchen behind the bar. This was a total shame since Night Train’s pizza was quite tasty on all counts and so nice and slim.

I’d love to come back and give them another chance since this would be a darn good slice if they just cooked it right. And, how can you not love that special price?

PS – About that Detroit slice, my buddy tried, look at this odd assembly of cheese-covered bread with a spoonful of tomato sauce on top. This soft and garlicky creation was not much to his nor my liking from the half slice he let me try. 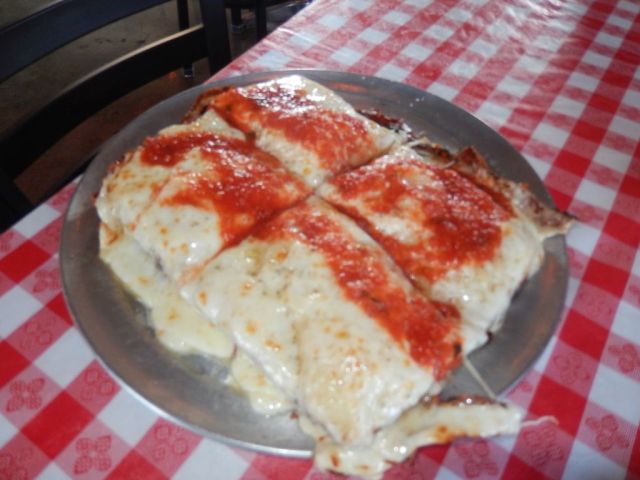