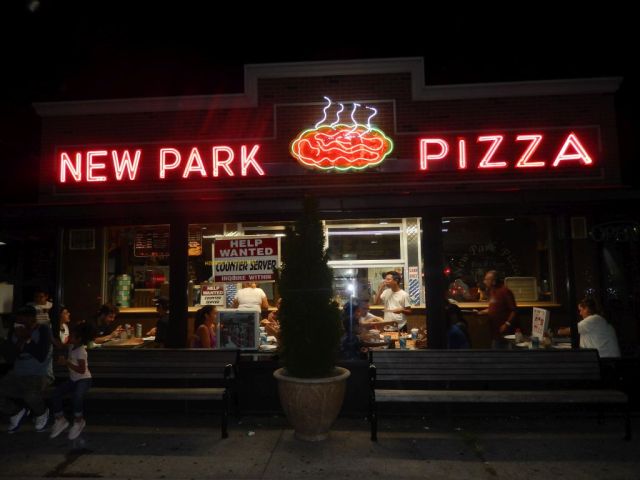 I sometimes just don’t care to read what others have to say about pizza. Perhaps in some foolish way I want my opinion to be the only one I care about. Nonetheless, I couldn’t resist following Bon Appétit magazine web editor Alex Delany through his erudite and entertaining You Tube video “23 New York Pizza Slices in 36 Hours.” It was fun to see how our judgements lined up on a lot of joints, and his work also placed a few new targets in my sights. The first would be New Park Pizza on the southwest side of the New York City borough of Queens.

The landscape of Queens is vast and not fully within my grasp. After landing at La Guardia Airport, my nighttime drive took me south towards the proximity of JFK Airport. Travelling over varying expressways, it was quite a journey and didn’t get me any closer to my destination home in Jersey.

New Park is in the middle of a busy commercial district on Cross Bay Blvd. just off the Belt Parkway. I made it there well before their 1am closing time. Lit up and swelling with pizza-eaters, New Park stands out like a beacon. After swinging my tiny rent car to the other side of the boulevard, I found a parking place in their lot right behind their square free-standing structure. 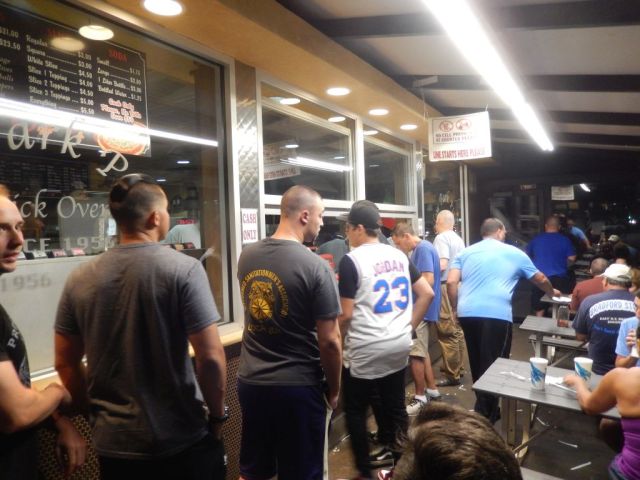 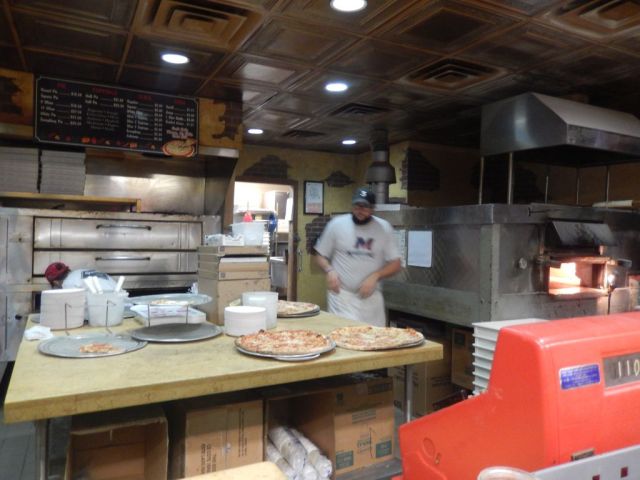 There was sure plenty of action for this late on a Thursday evening. I heard that the dining room, which I could not see, was either closed or full. There were at least a dozen other folks queued up to order like they were at a Dairy Queen in front of the window overlooking the kitchen in the narrow front room. There were also some crowded wooden tables on the other side of the room.

Feeling the pressure not to hesitate when my turn came, I sized up the wares which were in full view through the counter opening. I set my sights on getting both a regular and a square slice. I wound up getting a “None left!” on the square when I finally got to ordered, so I went for two regular plain cheeses ($3.00 each). The service process did seem a little unorganized and they overlooked my order. I interceded when I saw others after me starting to get their goods, and by the time I eventually got my two triangles, they did have squares ready! 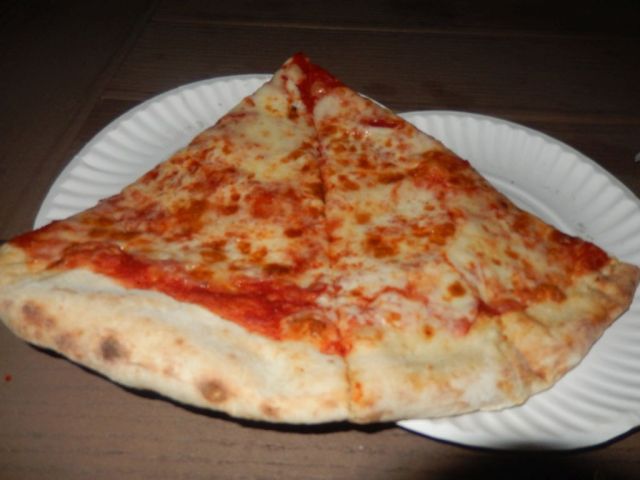 No problem. As busy as they were, I can see how this stuff happens. My pretty pair came on twin paper plates, and I took them to a table just out the door on the side of the building. They were looking scrumptiously good, and I was starting to thank my new YouTube friend before I even had taken my first bite!

New Park’s pizza had an eye-appealing different look to it. Kind of swirly is how I’d describe the way the cheese and sauce met on top. It did look a little thicker than normal and my first munch revealed that it was also a bit softer than I’m accustomed to. But gosh, surprisingly the bottom crust had a deep char that resulted in a tasteful and chewy crust. My second slice was so soft that it even drooped when I first picked it up.

Not too hot, but served just right to eat, the slices were not as thin as crispy as the Snob prefers, but the taste of New Park’s creation was truly sublime. Oil present, but not messy, they tasted fantastic. Despite being a sucker for crispness in my pizza, I could have eaten two more of these and might have had the line died down. I liked this place.

I can’t tell you exactly why, but the word that came to my mind when pondering this slice as I drove home on the Belt Parkway was “dreamy.” It just had something magical in its taste.

I see that New Park has been in biz since 1956. That’s a long time and I should know, that’s the year I was born! Here’s to another 60 years of great pizza-making in Howard Beach.

New Park is only five miles from JFK Airport, so if you are ever travelling through JFK, that’s your excuse to give New Park a visit. You will be glad that you did. They make a great slice of pizza that stays close to tradition but is unique enough that you could pick it out of a pizza line-up!