5 Boroughs Pizza – A Slice to Avoid

Location is as important for a pizza joint as much as it is for any retail business. Given the right spot with a big attractive sign, you should be able to attract customers. On several late-night trips from LaGuardia Airport to Jersey, I took the Williamsburg Bridge into Manhattan. Crossing through downtown on Canal Street, I couldn’t help but notice the big glowing sign of 5 Boroughs Pizza on its uber-busy twisted street corner location that had somehow had its storefront facing the oncoming eastbound traffic.

Usually tired and fed by then, I just passed by knowing that parking in this area also sucked. The place however lingered in the back of my mind and finding myself on the southern tip of Soho late one evening, with my car already parked on West Broadway, I thought I’d take a stroll over to 5BP.

My visit was on total spec since I had heard absolutely nothing about the place nor did I even check for comments on Yelp. Unfortunately, this bravery would be totally unrewarded as 5BP’s pizza was miserably awful.

The first clue that I was in trouble was the fact that their slices were cheap: two cheeses and a can of soda for a fiver. Next was the generally unkempt condition inside. I know that pizza joints typically don’t win Good Housekeeping Awards for neatness, but this place made me feel uncomfortable. It was surprisingly crowded and just a bit too grungy for me. 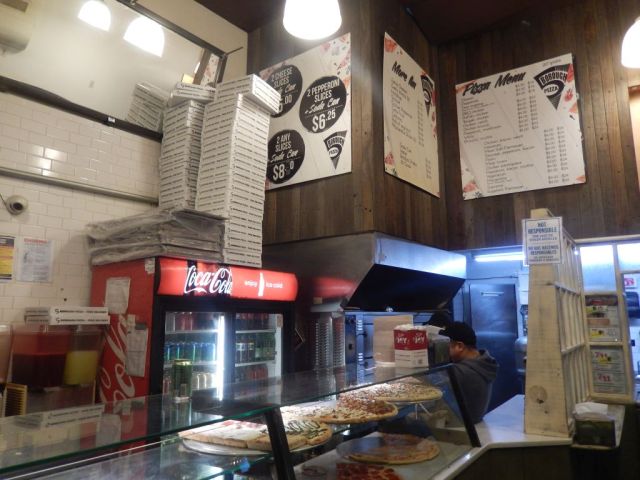 There wasn’t much to the small room—slices on display on the counter to the left and seats up against the wall on the right. Skipping the package special, I ordered only a single cheese slice that set me back an undiscounted $2.50.

My slice was so bad that I barely ate half before I determined that it was destined for the trash. And, as I deposited it in the bin, I noticed several other partially eaten slices that had suffered a similar fate.

What was wrong with this pale white, dull and spongy looking, limp slice? Everything! First, there was no crispness to its crust whatsoever. Then, it only took one bite to flush out the horribly bland taste that I can only attribute to cheap ingredients. Only two bites, and I had to suffer with its unpleasant aftertaste all the way home. 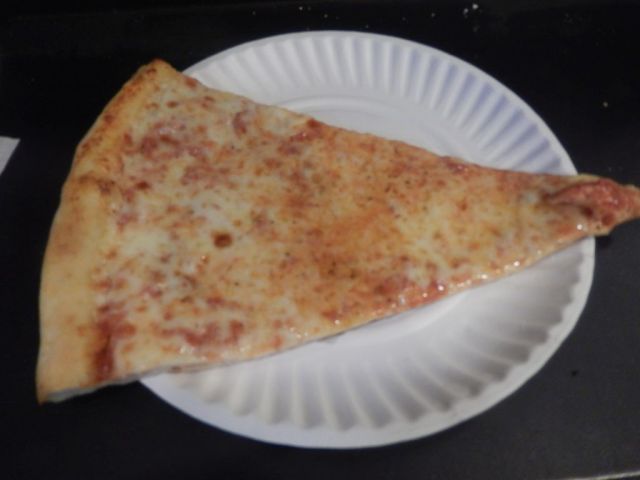 I don’t look for a bargain when I buy pizza and that’s why I avoid the $1.00 slice places. Although 5BP is a $2.00 slice place (if you get the special), it too should be avoided. Especially in Manhattan where there are more great pizza places than most people can experience in a lifetime.