On a pleasant evening, there are few things I enjoy more than walking the streets of New York City. One not-so-recent Sunday, I meandered about Greenwich Village relying on memory, sight and Yelp to try and find some pizza that I have yet to sample. Having already scored a decent slice at W4 Pizza, I ventured to the other side of Washington Square Park where I discovered Pizza Mercato on the corner of Waverly and Mercer.

As I approached PM, it struck me how the Village landscape had suddenly changed. The flair of Bleecker Street and the culture emanating from NYU had dissipated. For all intents and purposes, with the commercial office building vibe I was feeling, I could have been in Midtown. I would soon see how this environment likely influenced my upcoming slice of pie. 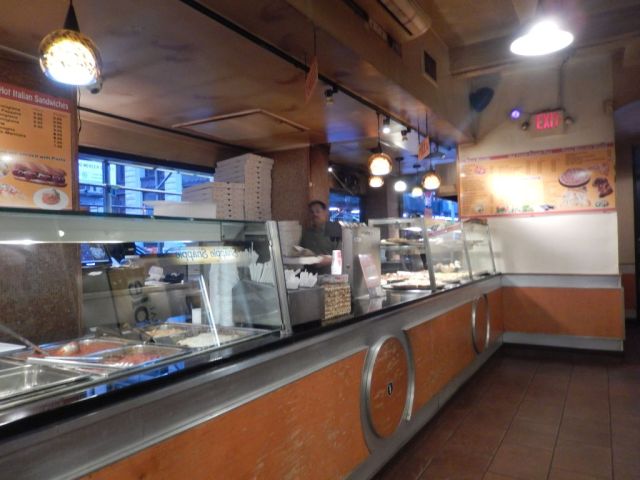 Once inside the joint, I felt like I just went downstairs from my place at work to grab a quick lunch from the building cafeteria. Perhaps my assessment was not a totally realistic one, but despite PM’s pizza-centric menu, the place just didn’t have a pizza joint feel. Their food fare included sandwiches and pasta and they also catered, so maybe I was somewhat accurate in my judgement.

My expectations lowered quickly since those tending to the business at hand acted rather casual towards me, and the place wasn’t exactly what I’d call clean. Nonetheless, I wasn’t scared away and ordered my second plain cheese slice of the evening ($3.00) from those sitting out on display.  I’ve learned from experience that my random pizza stops aren’t always a success, and this one turned out to be one to not rave about.

It didn’t take long to get my slice from a worker who really seemed like he was done for the day and wished he was home. As for the pizza, it was pale and dull looking, and had a strange distracting taste to it. Succinctly speaking, I didn’t like it, and the more I ate of it, the more my dislike of it magnified.

In addition to the off-putting taste of the cheese and tomato sauce, it was as oily as a bad piece of fish. And although it had enough char to keep it from being soft and mushy, there was nothing at all satisfying about the crust. About the only positive thing I could say about this one is that I somehow managed to eat most of it. However, had I known about the lingering bad aftertaste that followed, I probably would have quit earlier.

There’s really nothing more to say about this one, and I’m probably being kind with this rating. I really hate dissing a slice, bit sometimes you just have to.

← W4 Pizza in Manhattan—A Quick and Tasty Slice
Angelo’s Pizza in Fords, NJ—Just Another Decent Slice in the Pizza State →