It’s happened before and will probably happen again. While on a holiday dining experience with Mrs. Pie, I’m overcome by an immediate desire to first grab some new pizza as an appetizer. Such was the case earlier this year when on our way to get a seafood fix while on the Florida coast, I couldn’t resist starting out with a quick sampling of the wares at Ripfire Pizza & BBQ.

Ripfire was the first place I’ve seen that touts both pizza and pork, and to be honest, these are two things I have no desire to experience in a common setting. However, in what likely would have been an easy “pass” for the Pizza Snob, I was rather intrigued by what I saw the patrons partaking in out front on Ripfire’s street-side patio. Thin and crisp will seduce me every time.

The well-organized inside layout of the place makes this, the lone Ripfire, look like a chain wannabe. I curiously walked to the rear counter in front of the open food preparation station to start the process to order my pie. My addition to their wood-burning oven was one of their “Signature Pies,” a $12.95 Margherita. They gave me a number and I casually retreated through their large spacious indoor room to a spot on the narrow patio where I enjoyed the fresh Florida air while I watched the passersby. 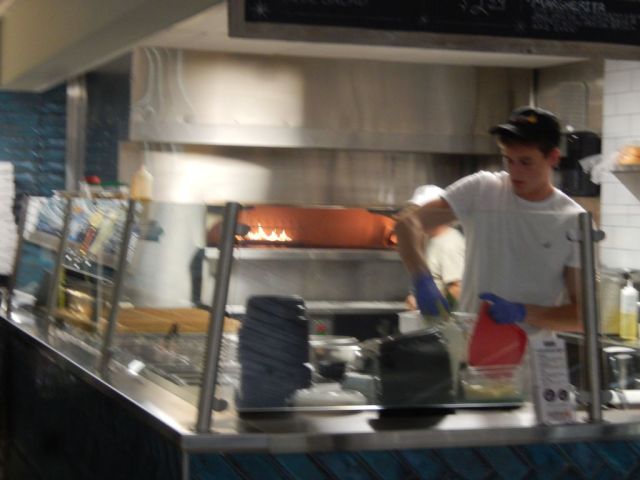 My pizza seemed to be taking too long to make it my way, and I went back to the counter to see if they had lost my number. (I didn’t want to forfeit our dinner reservation across the street!) Advised that it would soon be ready, it eventually arrived, and I dove in to what I would describe as one scrumptious pizza.

Sometimes my pizza photos just don’t do justice to the some of the good ones I eat but looking at the picture of the Ripfire pie still makes my mouth water. Despite its most-likely unintentional heart shape, it was a beautiful specimen with a gently-charred crust that just look so downright chewable. The way the red, white and green colors collided in the center also seemed to elicit that they were planned that way rather than made in a flash like this one was.

The Ripfire crust, which was cooked crisper than usual for a pie of this type, was nothing other than sublime. This “Fried Margherita” as I will call it, had light tasty cheese covered with slivers of basil, a swirl of tomato sauce and olive oil that bordered slightly on the soggy side. It was a little wet in the middle, but manageable and not bothersome.

I ate and thoroughly enjoyed every bit of this fine pizza. In fact, after quickly “inhaling” this light and delicious pie, I made a trip to the restroom during which Mrs. Pie said the server came by noticing the empty plate and sheepishly said, “I guess everything was OK?”

My visit to Ripfire was a surprising success. I didn’t try any BBQ but can tell you that this is a pizza that you sould not pass on if you were to find yourself in Siesta Key.