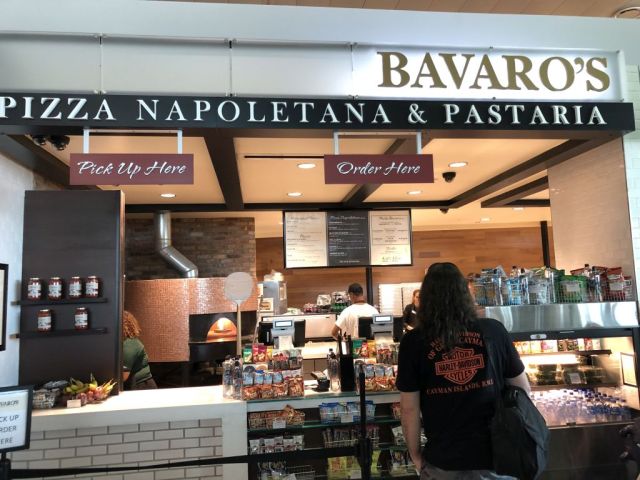 Vacation time in the Florida Gulf Coast was over. Had we managed to spend more time in Tampa, my pizza destination there was to have been the highly-touted Bavaro’s Pizza Napolitana & Pastaria. So, imagine my lucky surprise when I came across their station at the Tampa airport on the way home! In my opinion, limiting airport dining spots to only local businesses is the best thing a local government can do just short of providing free parking!

By the way, earlier this week, I had spotted a news story that Bavaro was opening a Sarasota location this weekend in addition to their flagship in Tampa and another in neighboring St. Petersburg.

With plenty of time before my Southwest flight left the ground for Music City, it was lunch time and the perfect opportunity to give Bavaro’s Neapolitan pizza a try. Smartly, the airport Bavaro supplemented its menu for the travelling clientele, adding some breakfast items, snacks and bottled water. But there in the corner stood a small oven that was firing up smaller-sized pizzas that were just right to take on-board and freshen up the smell of airplane cabins. 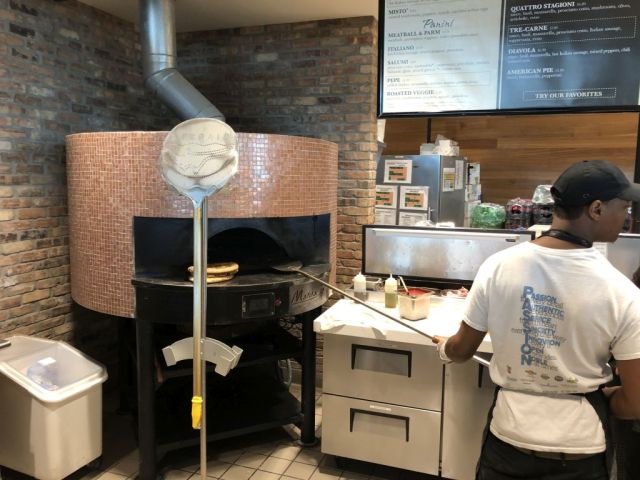 There were a few pizza options from which to choose, and I ordered mine plain Margherita style ($14.75 after tax). It was a bonus that the dude behind the counter wore his airport ID around his neck on a croakie with a Yankees logo, and we got to talk about the Bronx Bombers. Fortunately, Mrs. Pie was in the rest room since she rather I not talk to strangers that I identify to be Yankee fans while in her presence.

With a plane to catch, I thought it wise to ask how long it would take. “Five minutes” said the Yankees fan and it did not even take that long. They had a slick streamlined process of adding the goods on top of the already pre-made round crusts and tossing them into the hot oven. With the clock in my favor, I had ample time to enjoy my pie pre-flight. I now had my cute little four-slicer inside a small white box that I took to the Southwest gate. 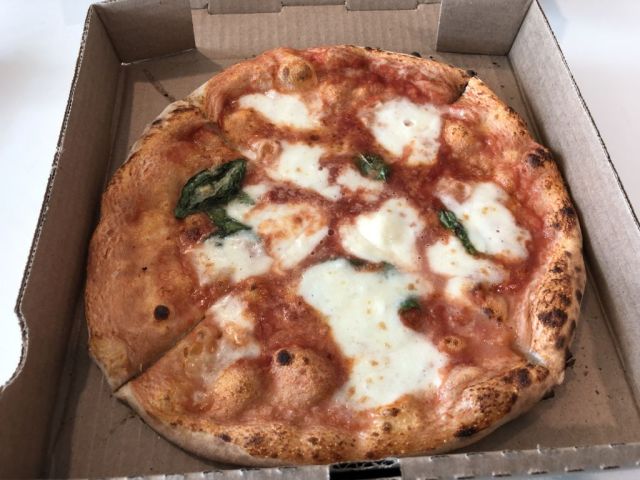 Wow! Putting conditions for the sake of convenience aside, it was a truly exquisite Neapolitan pizza dining experience. What really put this one over the top was the pinkish vodka-like sauce. And although I thought that my pie would suffer from being too wet, I was wrong, and it was drenched just right with this de-“light”-fully-tasting smooth and mild tomato sauce. Slice #4 only suffered slight sogginess after it had time to cool down.

With an N-pie like this, it is of course “crust, crust and crust,” and Bavaro’s pie had a magnificent one, albeit with only a few black char marks. Nice and lightly on top were just a few blotches of some delicious Mozzarella and the basil leaves didn’t offer much help since they were as scant as snow in Florida. Oh, how I ate and enjoyed each and every bite.

If Neapolitan pizza is your thing and you are in one of their Florida cities, you absolutely need to give Bavaro’s a try. Likewise, if a travel situation finds you at Tampa International, you may very well find yourself having the best meal you have ever had in an airport. I sure did!