No matter what my mission is when I’m back home visiting the Pizza State, any new destination involves finding some new pizza. In Jersey, this is about easy as finding a songwriter in Nashville where I currently call home. So, my trip to see the minor league baseball Somerset Patriots baseball game with my kid brother would be no different. It didn’t take long to locate Carlos Pizza & Pasta which we found in a strip center not too far from the ballpark.

The inside of Carlos was of the classic Jersey pizza joint blueprint. Formica-top tables in front of a counter with the exposed kitchen area right behind it. One further luxury today was the Yankee game on the television and the presumed owner behind the counter who was as rabid about the Bronx Bombers as am I. 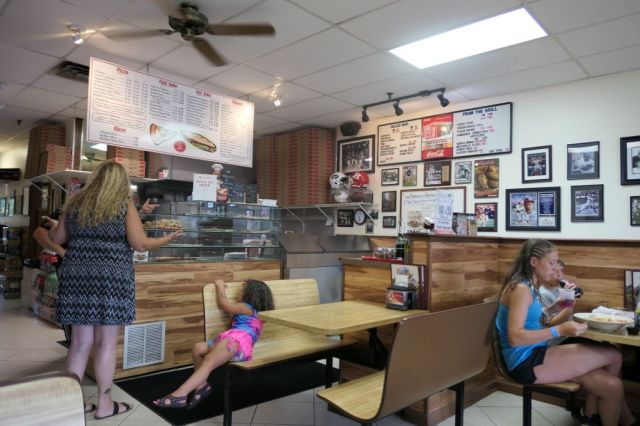 Choosing Carlos as an appetizer to be followed by some ballpark food, I ordered a plain cheese slice (at a very friendly two bucks a slice).

Seconds after he started in on his slice, my sometimes-quiet brother got quite vocal and said, “This is a very, very tasty slice.” Noticing the repetition in his adjectives, I got quite curious and soon discovered that he was right.

As for its looks, the Carlo’s slice was a stocky equilateral triangle. Said stockiness was balanced between cheese and dough and in the end was no cause for despair. It excelled in crispness and the overall flavor just rocked. Nothing overly out of the ordinary, just a great solid slice served up just right. This is how you are supposed to do it.

PS The Yankee game got close near the finish, so we each ordered another slice over which we savored their eventual victory! Baseball and pizza—what more could a person ask for?