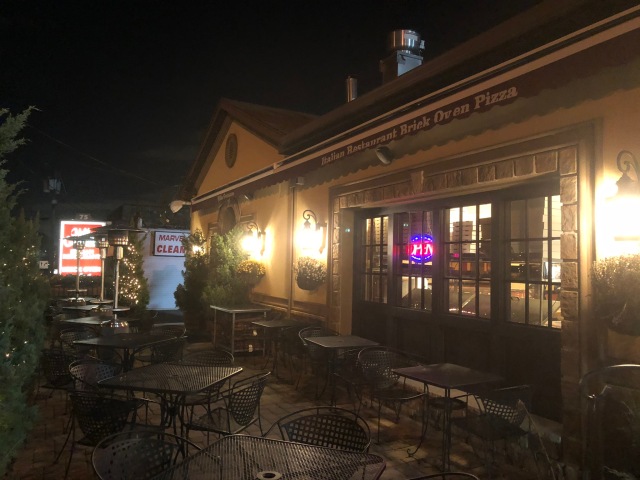 On a short trip back to the Pizza State, Mrs. Pie, our son The Professor, my brother and I were looking for a place to have dinner in my brother’s home spot of Edison. Rather than pushing for some pie, I thought I’d lay back and let them call the shots for our whereto. Being where we were, their talk inevitably got to Italian food and my better half picked a place she Yelped that my brother had not been to before called Villa Gennaro Italian Restaurant.

It had gotten dark already and we parked behind the dimly lit and somewhat upscale (at least for the Snob) restaurant on the corner of one of the town’s main streets. My brain had already decided that my meal would consist of chicken parm and a Caesar salad and that got me feeling good. Until of course we walked in the door and passed an incredible-looking display of pizza slices on a countertop in front of a brick pizza oven! It was clear that pizza here was not an afterthought like at some Italian restaurants.

Villa Gennaro’s space was divided into two areas. One was like a typical pizza joint and the other was a more formal dining area. I recall that there may even have been a transition from tile to carpet as you went from one to the other. Whatever the case, there would certainly be some menu cross-pollination happening tonight!

After being seated at a cozy place, our table service soon arrived, and I released the order I had earlier envisioned adding a plain cheese slice to start things off with.  A good-looking New York slice showed up first on a plate in a flash while they went to work on my salad.

The slice was a double-wide triangle in size and was nicely thin and crisp. The crust was good and solid, not overly crisp with a decent char on its backside. It was cooked just right. What won me over on this one was how flavorful it was. I gave it a fold and the lush tastes of the tomato sauce and oil deliciously came together making it kinda juicy in a really good way. They had spiced it up quite well and it was one tasty slice of pizza. Not the greatest I’ve ever had, but certainly darn good.

The Italian food we all had was fantastic making Villa Gennaro Italian Restaurant both an excellent choice for fine dining in the evening and a great place to grab a slice anytime you need one! I’m going back!