Pequod’s Pizza–Deep Dish Delight from Chicago to Your Doorstep

In my nine years as The Pizza Snob, all I have ever earned from the labors of this blog were a few free slices from some of my fave local pizza joints and a discount one time when I made the mistake of telling a place I was coming to check them out. The mistake was that it put me in an awkward position when I had to author a less-than-perfect assessment of their pizza.

But does that mean that The Pizza Snob can’t be bought! Well, let’s just say that I can easily be encouraged to write about your pizza. Case in point was the kind and generous offer I received from Pequod’s Pizza in Chicago to mail me a couple of their deep-dish pies to sample. I accepted the risk of feeling awkward while they took the risk of sending these pies to a guy who favors New York Style pizza! However, as you will read, in the end, there was no question as to the fact that their pizza was wonderfully delicious. 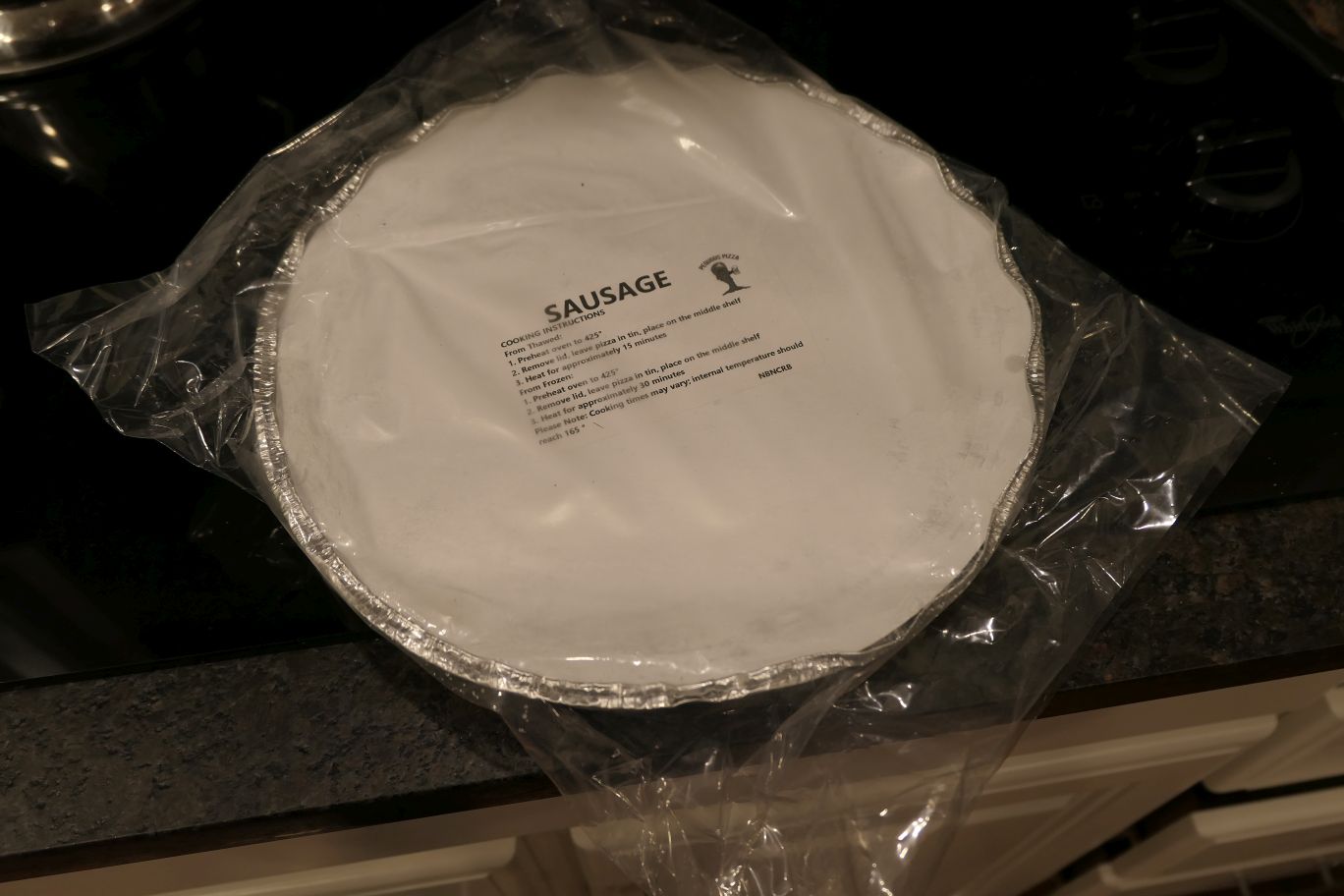 I had known that some notable pizza places were packing their pies in dry ice and shipping them across country, but I had never before ventured into this domain. My Pequod’s experience seemed so easy when the package arrived safe, secure, and fresh courtesy of the delivery folks at Goldbelly. Inside the neatly packed box were two pies (one sausage and one pepperoni) with easy-to-follow instructions on how to cook them either frozen or thawed. Mrs. Pie and I were a bit “pizza-ed out” and decided to store them in the freezer for a later date.

One Friday night, I got a surprise for dinner with the Pequod’s pepperoni pizza which I must say, Mrs. Pie expertly cooked in our conventional oven. I pride her thoroughness in following the instructions to check its internal temperature like one would cook a turkey. The result looked beautiful with a dark char line around its circumference. Now you may ask “Where did that come from?”.

Here it is in Pequod’s own words:

A ring of mozzarella cheese surrounds the pan pizzas’ crust, deeply caramelizing as it cooks along the side of the cast iron pizza pan, forming a cheesy, chewy, almost-burnt halo that’s one of the most hallowed bites in all of pizzadom.

An absolutely amazing redesign of the traditional deep-dish crust – thicker and not buttery like others I have had. The aluminum foil tin encasing the pie did a perfect job in assisting this process.

We wasted no time and dove right in while it was good and hot, although we did make a little bit of a mess with our impatient slicing. The Pequod’s pie not only looked great, but it tasted great as well. My true delight came from the fact that there was an extravaganza of flavor throughout. There were three distinct flavor-tasting zones to savor: the inner realm of the soft and delicious cheese and tasty tomato sauce, the soft and chewy bread-like crust on the bottom, and the remarkable deeply charred caramelized crust on the outer edge. I think the latter was my favorite. 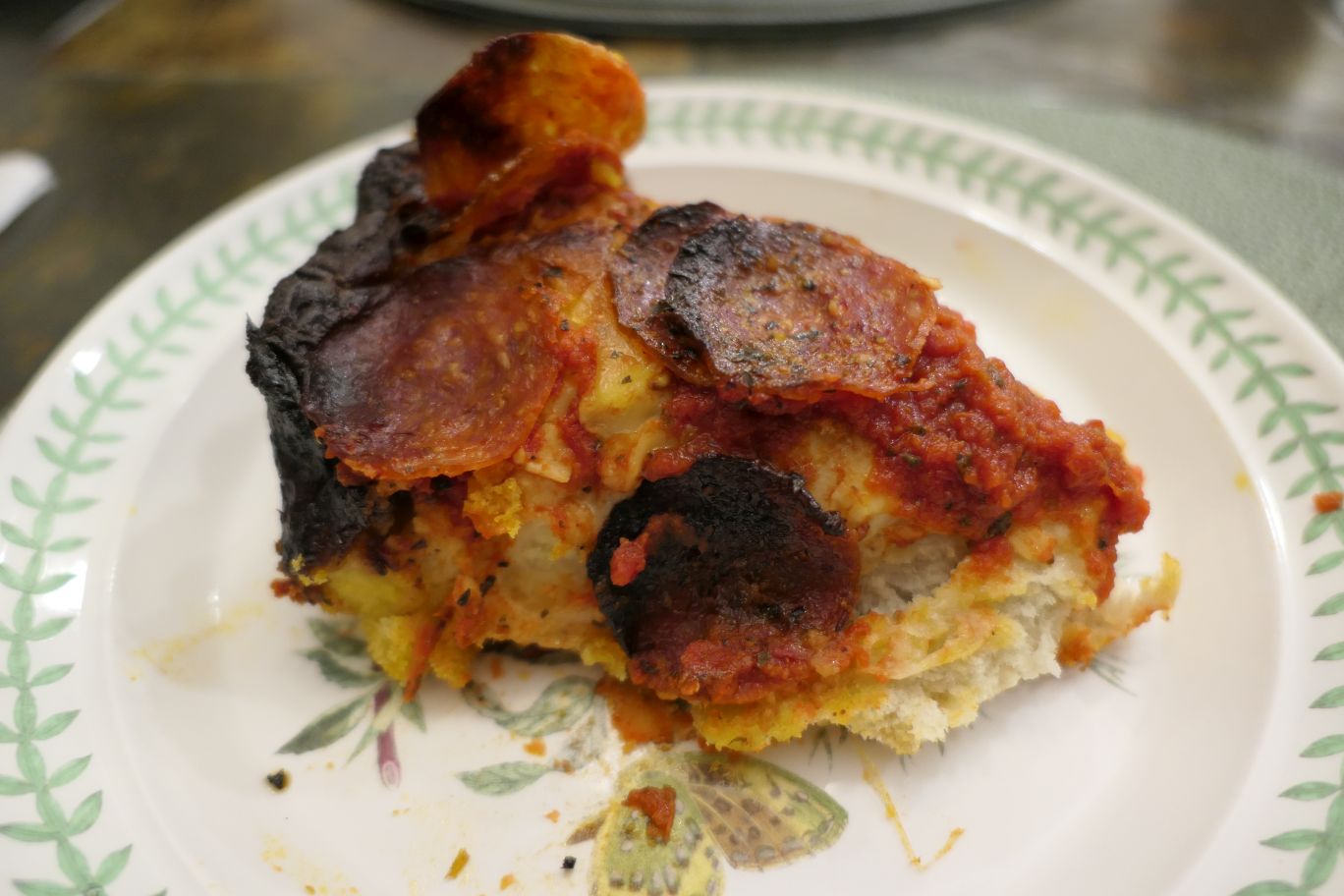 Mrs. Pie loved it as much as I did. She commented how this restored her faith since her only previous deep-dish experience at one of Chicago’s historic spots was a complete disappointment. I had no choice but to agree with her that the Pequod’s pie hit high marks all around.

So that brings us to Pequod’s Pie #2. Thinking that the sausage pie may not have travelled enough, we thought we would pack it on ice in our cooler and take it to Texas with us on our visit to see Mrs. Pie’s dad. (I wish I could say that this thoughtful gesture was my idea.) Holding it as a surprise for when we arrived at dinner time, we did call him with a request to turn on the oven only to find that it had just broken! Nonetheless, it was my idea to use his toaster oven which managed to work out just perfectly. 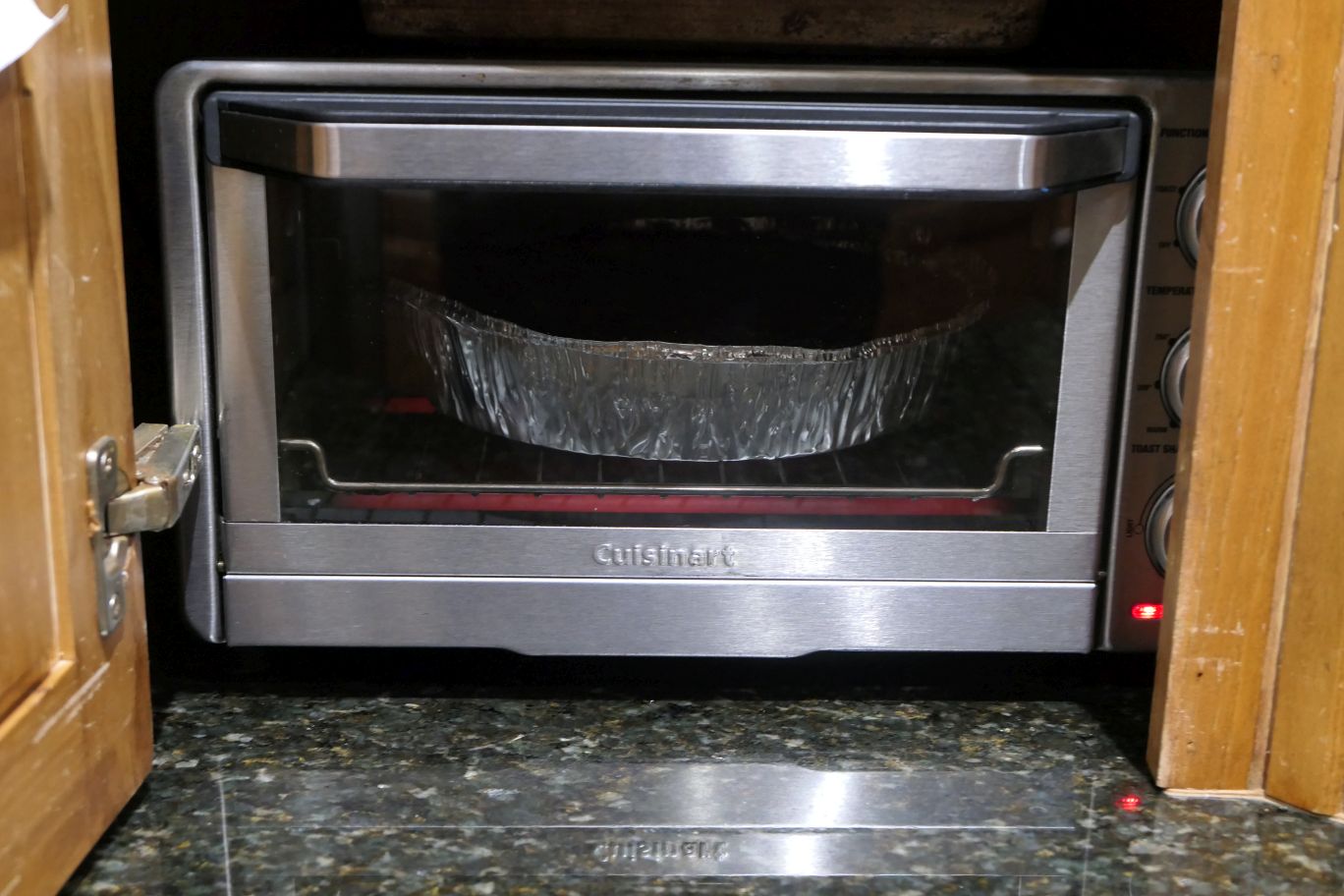 Our second pie was just as delightful as the first and we now had a third person to chime in about how good this pizza was. When I asked her dad what rating he thought it deserved, he said that there was no question that it should get my highest. We three really enjoyed our dinner that night.

Being that I don’t get to Chicago much anymore, I think I may just have to put in a Goldbelly order on my own, and I am recommending that you give it a try as well. You can get a pair of pies sent to your doorstep for $75 and right now there is a coupon getting you $15 off your first order. Now that’s a deal you should go for. It’s a fun experience that you will further enjoy since your cooking makes you a part of the action!

While I will never forgo my allegiance to New York Style pizza, there’s no use being foolish and not enjoying something so delicious as Pequod’s deep-dish pie. And if you make it to Chicago, they do have two brick and mortar places for you to visit.

Yes, my deep-dish experience over the last decade has been limited, but I doubt that I will find another one that I could possibly enjoy more than this one.