Since moving to Tennessee in 1998, the Snob family has visited the Florida Panhandle most every year, sometimes going both in the spring and late summer. When the kids were still young Snobs, we visited the Destin side of what we Southerners call the “Redneck Riviera.” Later, when it became just Mrs. Pie and me, we moved our vacations east to the less family-centric 30-A side.

However, this year, we decided for old times’ sake to revisit Destin. This trip was both our first two-week vacation since our honeymoon and our first time to ever visit the Gulf in the cooler late fall. Before getting to the first of my three pizza visits during this stay, let me say that although it was long-sleeve and sweatpants weather on the beach, the fresh air and sunshine was incredibly pleasant!

In the time we had been away, Destin has sure continued to grow. Therefore, it was a given that the Snob would find some new pie to discover. The first stop was Mrs. Pie’s suggestion which she discovered through a great Yelp review (“Slap my face, this place is so good!). It was an Italian restaurant in a strip center close to where we were staying. So, we made a reservation, and we were off to an early mid-week dinner at Pazzo Italiano Destin.

Pazzo is a moderately upscale restaurant and had tables set up both inside and out although it was a tad to chilly to go al fresco. This place was as expected more than just pizza although they had a spiffy wood-burning oven to cook then up. Being quite hungry and knowing that leftovers always make sense with the usual half-full refrigerator at the beach, I decided on a chicken parm dinner after of course starting things off with a pizza. I selected the top of the menu “Cheese Pizza” for $15, after debating whether I should choose instead the $19 “Regina Margherita.”

Before, I get to the food, I first want to say that our waitperson was fantastic, and we received some of the warmest, friendliest, and most efficient service possible. Unfortunately, the pizza was a little disappointing and the chicken parm dinner was mediocre.

Pazzo’s pie is best labeled as “very cheesy.” But its moderately-charred crust did look inviting. However, said crust proved to not be crisp enough and solid to hold all that heavy cheese which made this pie difficult to keep together while eating. I had no choice but to put my fork into action to eat the tips of the triangles before I could pick slices up to eat the customary way.

That said, the ingredients for the most part were rather good and tasty. In fact, I found the cheese to be incredibly delicious. It was nice and fluffy and was full of flavor. And the soft crust was very Neapolitan in design and tasted great as well. It was obvious that a lot of effort went into its creation. The tomato sauce however was barely noticeable in that it was both underutilized and lacked any pizzazz. 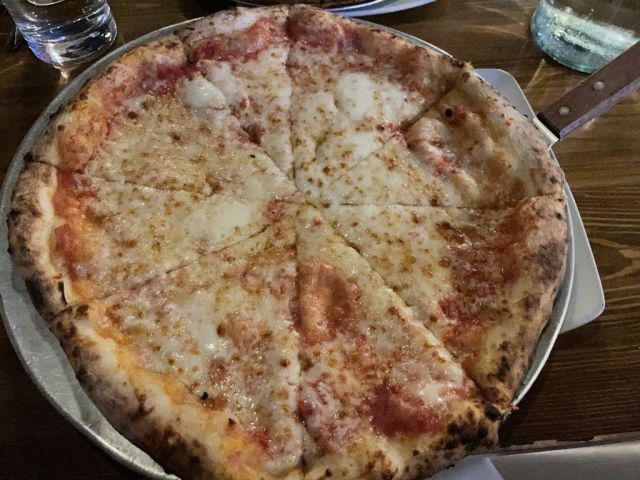 Looking back, I might have fared better with the Margherita which would have likely carried less of a cheese burden. All things considered; this was just way too heavy of a pie for my liking. (Mrs. Pie has often commented how folks in the South seem to like pies with lots of cheese.) I took what I didn’t finish home for leftovers and sadly never had the desire to give them another try.

Pazzo was a respectable dining experience but watch this space for a much better place for both pizza and Italian food in Destin that I found later during our stay.