You know what I’m talking about. That little round “personal” pizza that is puffy because it has way too much cheese and dough. It’s light and fluffy and also undercooked because it wasn’t made in a conventional pizza oven. The cheese doesn’t cling to the oversized crust and it also has those light brown toast marks on top that can taste rather funky.  The puffy pie is known to appear in school or hospital cafeterias, gas stations and other places where you shouldn’t be eating pizza in the first place. Well I recently encountered one here in Music City at Sicilian Pizza & Pasta. Here’s how it looked. 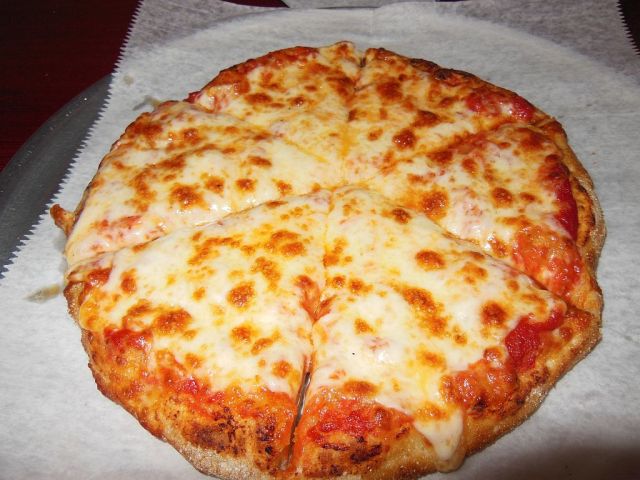 Music City Mike had driven by this place after many late concert nights at the Ryman Auditorium in downtown Nashville. And seeing that it was open every day and night from 10 a.m. until 5 a.m., I became downright curious and just had to give it a try. Just who were they catering to by being open almost around the clock? After all, way out there on the edge of downtown, I don’t see them catching the late night bar crowd. Perhaps, somewhere close by, some business runs a grave yard shift?

So one Friday I decided to hit it up for lunch with my Boss Man from work. I knew I was in trouble right away when I was told there were no slices and I had to go the “personal” pizza route. Those are words that you just never want to hear. The only thing nice I can say about the pie I got to eat was that the cheese and sauce didn’t taste awful. But the “puffy pie” just doesn’t do it for me; it’s just a blob of sloppy, runny cheese and soft, chewy dough. For whatever reason though, they did seem to have a good lunch time crowd and my protein fix (chicken Caesar salad) was actually pretty good. Boss Man went for his usual calzone which he rated fair. In the future, even if I am craving for pizza at 4:30 in the morning. I think I’ll pass on this place.