So let the truth be known that Music City Mike doesn’t actually live in Nashville. Although he does work and spend a lot of his time there, the place where he mows the lawn on Saturday and puts his head on the pillow every night next to his Sweetie Pie is the great town of Franklin, about 15 miles or so south of Music City. “Frank-town”, as The Kid likes to call it, is a small Civil War battle site city, nestled in Williamson County, one of the wealthiest in the USA. So, in addition to bringing down its average income, The Snob also does some pizza business there from time-to-time.

When we moved here back in 1998, the Snob’s slice-scarfing was mostly done in Nashville as Franklin didn’t have much to offer other than the chains. Things opened up a bit however on March 16, 2004 when I took my two sons to the grand opening of the Mellow Mushroom just off of the square in historic downtown Franklin. OK, don’t write me off just yet. Although I don’t consider the “Shroom” to be NY-style pie, it is not that bad of a dining experience and at the time was somewhat of a bit of fresh air for Franklin. Fortunately, there are other pizza options here now that allow me to just have a salad if I find myself downtown at the Shroom for whatever reason.

Things brightened up even more in September of 2005 when Mineo’s Pizza, Wings and Raw Bar opened its doors in the then newly-expanding east side of town off of Carothers. For awhile, Mineo’s was my go-to local place for a pie, eating both there and bringing the occasional one home as well. Overall, they make a pretty decent classic-style pie. However, beware as their name indicates, pizza wares are not their only specialty and the place also is a sports bar with televisions hanging everywhere. As for the pie I recently took home, I would say that I enjoyed it but was a little disappointed. I thought it had too much dough and the bottom crust was a bit too chewy. My other son, The Philosopher, just back from a pizza-less Germany, agreed with me about this when he reheated a few slices that I had frozen for him. The cheese and sauce were nice and they used just the right amount of oil, however, it did have more pizza bubbles than usual. Also, if you look below, it was mis-sliced just a bit. Still, I wouldn’t mind grabbing a slice there again if I find myself on the right side of town. 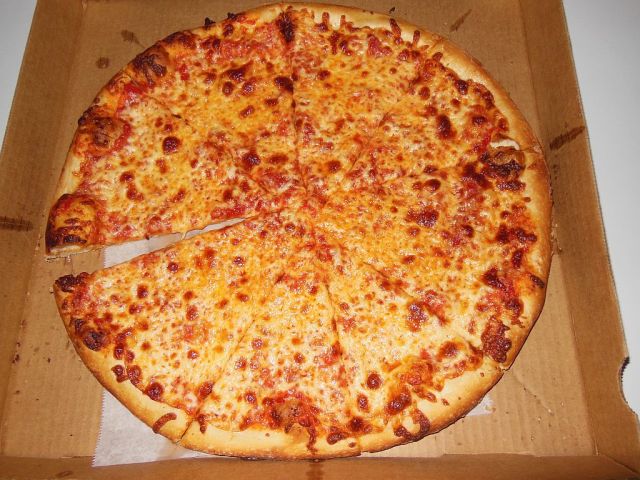 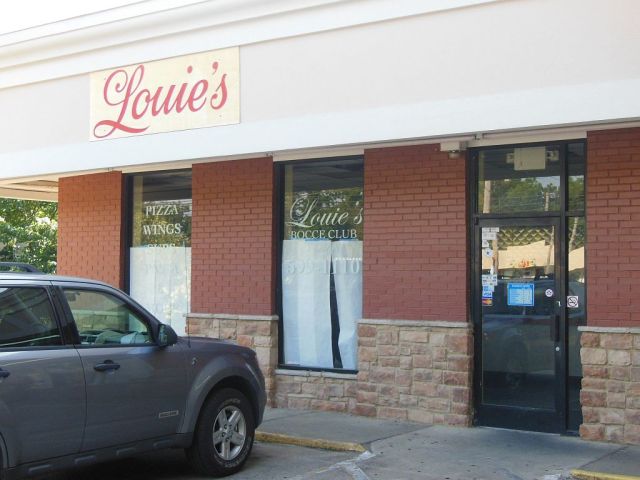 A place that I’d like to briefly mention, mostly because I thought that it had a really cool name, is Louie’s Bocce Club Pizza.  In 2010, Louie’s opened for a short while adjacent to a Daily’s-run Shell gas station on Columbia where their abandoned store front still remains. I only tried Louie’s once, on the referral of my good friend Roger the Roof Guy, getting one to go when Mrs. Pie was out-of-town. If I recall, Louie hailed from Buffalo, NY and labeled his pie as being “Buffalo-style.” Well, although I was not yet fully-ordained as the Snob, I really didn’t care for it as I found it to be too greasy and oily for my liking and never went back. R.I.P. Louie’s.

Recently, someone brought to my attention the fact that Nick’s Italian Deli and Pizzeria had moved from downtown Nashville to Franklin. I didn’t understand how I could have missed this news until I saw how they were located behind an AutoZone on Columbia and had poor visibility from the main road. When I first came to Nashville in 1998, some music biz honcho that I met took me to lunch at Nick’s old downtown Music City location. It was during a weird, embarrassing diet period of my life (which I don’t want to get into) when I wasn’t eating cheese, so I didn’t try their pie back then. But I do remember that the great songwriter Dan Penn was eating there that day! And if the writer of “The Dark End of the Street” was eating there, I thought that this place just had to be cool although I never went back.

So a few weeks ago, Mrs. Pie and I chose (well actually I did) to have dinner there one Friday night and we went for a whole cheese pie and were sadly quite disappointed. The pie had way too much cheese on it that kept falling off and it was way undercooked, despite my request to please cook it extra crispy. A week later when Mrs. Pie was on the road and I visited AutoZone for a part for The Philosopher’s car, I gave them another try with a slice that sadly was no better than my previous visit. I also went for some side protein with a chicken parm that was even more disappointing as they simply threw some sauce and a cold slice of cheese over a dull-tasting, breaded chicken patty. Although this place really has the right look and feel, as well as a cool drive-through to pick up your pie to go, it won’t be on the Snobs list as a go-to place.

Finally, last year I found my new “go-to” place for pie in Franklin in Sal’s Family Pizza, just inside Independence Square off Hillsboro. I have been to Sal’s several times now and enjoy their pie although my most recent experience just the other night wasn’t my best. I will issue a bit of a disclaimer as the Snob wasn’t feeling so well and his stomach wouldn’t even let him finish his second slice. As for the pie, their sauce and cheese were quite tasty and the crust was good although perhaps a tad undercooked. However, we did a whole pie “split” with some friends (note the minor “topping-abuse” below) and I thought they may have brought it out too hot to us. Something was not quite right as even though we waited a bit, the cheese kept falling off the slices. And to get it so it wouldn’t, it seemed like I had to wait until my slice was a bit too cold to enjoy at its best. Regardless, Sal’s still remains my fave hometown pie and Mrs. Pie told me to tell you that she really liked it that night.

One more thing about Sal’s is their Godfather Challenge (www.mysals.com/Godfather_Challenge.php). You won’t see the Snob trying it though as it would probably ruin me for life! 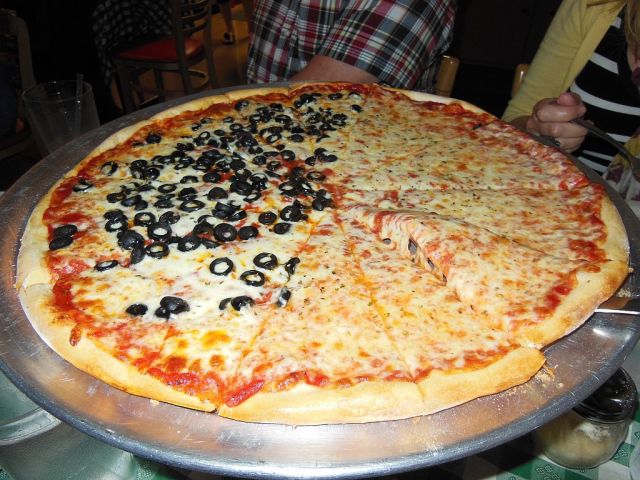 At the recommendation of a friend, I took a journey on the way home from work one day into the small neighboring town of Nolensville, which lies just east of Franklin, to try new place called Amico’s New York Pizza.  First let me tell you Franklinites that Nolensville Road, just south of Concord may sound close, but it’s not. This place was a good 30 minutes from Franklin and while a pretty good pie, it really isn’t worthy of that long a journey.

It was late when I got there and they weren’t selling slices, so I ordered a small pie to bring home. Cut into six pieces, Mrs. Sweetie Pie grabbed one and took the first bite proclaiming, despite her namesake, that the sauce was “too sweet.”  I agreed and also felt the sauce needed some more spice to it. The crust was well-cooked but lacked any real flavor. The cheese had a good melt to it but might have been a little on the light side. Nolensville residents should be happy though with the arrival of Amico’s as this was not a bad attempt at a classic slice.