Spring Hill is a small community just south of Franklin which in turn is just south of Nashville. Spring Hill is a mess. It sprung up out of necessity with the creation of a Saturn auto plant then failed miserably in its urban planning. The city is aesthetically unappealing and a traffic nightmare. I avoid it as much as possible. 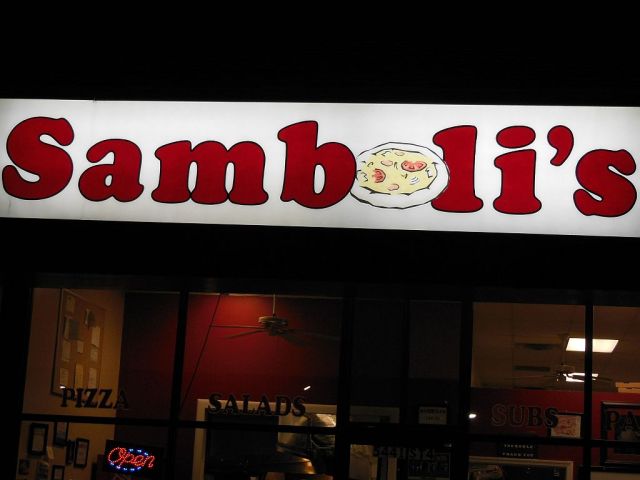 Recently, however, the Kid found a nice little Mini Cooper on Craigslist there that he wanted to buy. As his loving Dad, I went with him to have a look. With my usual pizza motive in mind, I realized I could also see what the town now had to offer since Joey’s House of Pizza closed its Spring Hill location. Outside of every pizza chain under the sun, Samboli’s was the only joint I had never heard of.   We headed there after doing the car deal. 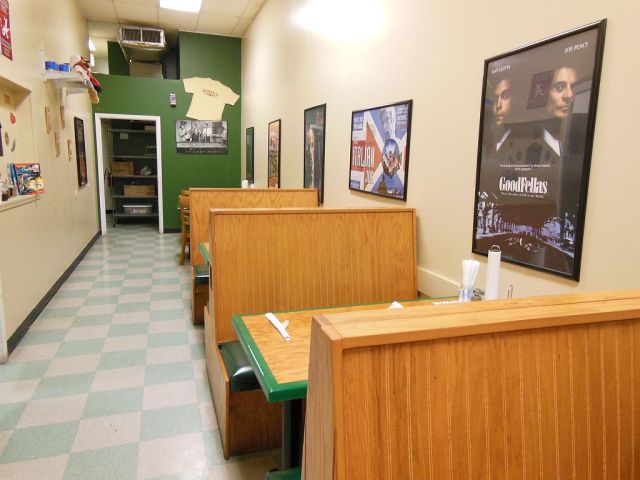 Like everything else in Spring Hill, Samboli’s is located on Main Street, a two-lane road running through the commercial district that is pretty much your only way in and out of town.  Samboli’s is a small storefront with counter service and a couple of comfy booths along the wall.  A newspaper clipping on the wall informed me that Samboli’s has been under new ownership since 2009.  It is not a slice place, but it didn’t matter since we wanted a large cheese pie and salads for dinner.  After ordering, we freaked out when we looked above our booth to find a poster for the 1969 British film, The Italian Job, the movie that helped put Minis on the map.  (See the trailer here.)

My starter salad was appetizing and flavorful with the addition of spicy chicken fajitas. As for the pie, while the cheese was stronger tasting and more pungent than I like, the execution in cooking it was near perfection—cheese melted and crust browned precisely the way they should be. The Kid raved about the pie, as well, and also agreed with my observation about the cheese. Usually needing to relieve his slices of excess oil, however, he happily found no need at Samboli’s.  Upon inquiry, the cook stated that he used 100% mozzarella, so I’m not sure why the cheese was initially off putting. The plain, unseasoned tomato sauce got the job done nicely. Despite the fact that the newspaper clipping said it was homemade, although I could be mistaken, I just can’t resist showing this picture of what I spotted on my trip to the bathroom.

Together, we had no trouble devouring our pie much to the disappointment of my other son, The Philosopher, who was at home expecting leftovers.

All in all, I plan on going back to Samboli’s if I ever find myself in Spring Hill again. The Kid and I both agree: this pie was in no way lacking.