Since this blog began, several readers have placed Di Fara Pizza on a rather lofty pedestal including America’s Test Kitchen (see video).  Everywhere I looked, I saw Di Fara’s referred to as the best pizza in Brooklyn, all of New York, and sometimes the entire world. All of this talk placed it atop The Snob’s places to visit, so I made it the centerpiece of my recent trip home. 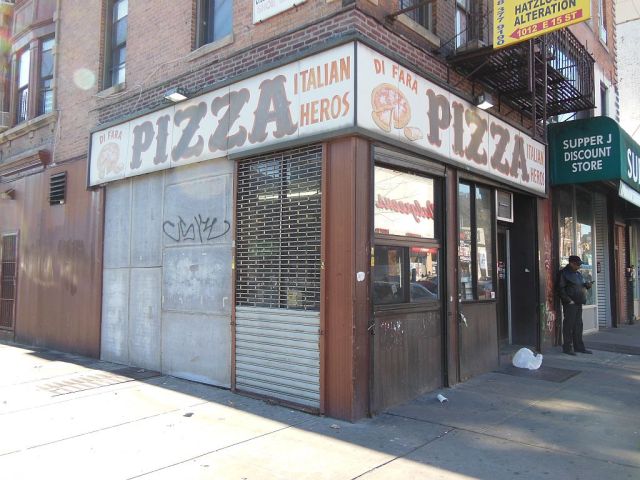 Concerned about their legendary lines, my brother, Dodger Fan, and I got there at 11:30 a.m. on a Saturday afternoon—30 minutes before their scheduled opening. Finding only one person on line, we toured the old Hassidic commercial district, arriving back at about five minutes before noon. The queue had grown to about a dozen and peeking through the window, I spotted the familiar face of pizza master Dom DeMarco. 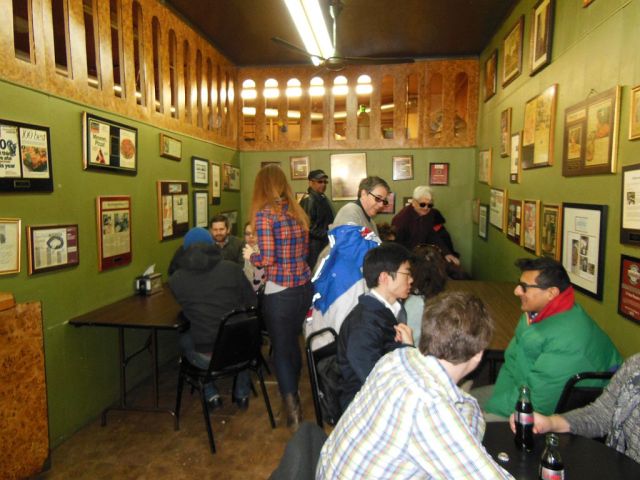 Opening ten minutes late, the line slowly poured in. We grabbed the last of the few two-seat tables remaining. The guy who was first in line staked claim to the lone large table in the tiny room. Dom was behind the counter making pies below a large menu sign while a woman at the counter recorded orders on a yellow legal pad. Next to your first name, she would add either a triangle or a box, depending on whether you wanted a regular or square slice. Dodger Fan and I ordered one of each at $5 a pop. I handed her a twenty, and we proceeded to watch the master make pies while we waited. 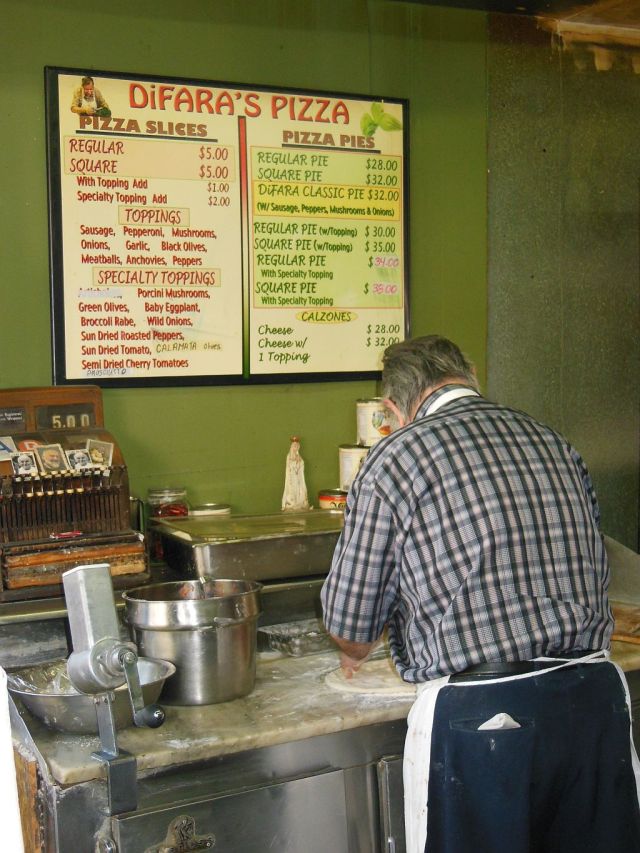 Seeing Dom work with such a passion and artistry for quality pizza-making made the trip worthwhile in and of itself. Recalling from the video how he kept his oven at 800 degrees, watching his bare hands go in and out was scary! We saw the full process as he spread the dough, sprinkled it with flour, added a light layer of tomato sauce, placed clumps of fresh mozzarella on top, and finished with a sprinkling of parmesan cheese and a dash of olive oil (from a vintage can) before sliding the pizza into the oven. At this temperature, the pies only took a few minutes to cook. When they came out of the oven, Dom splashed on a little more oil and topped them off with some fresh basil, snipped from leaves with a large pair of scissors.

After all the anticipation, we got our regular slices first and by the cut of the pie, I got a small one that was cracked in the middle and fell apart when I picked it up. Despite my disappointment, I enjoyed it nonetheless, and then ordered another regular for a try at a better slice. Eating the square slice next really put things into perspective. Though it required a fork to get started, I was later able to pick it up and hold it firmly. I liked that it had a more cheese than the regular. While eating it, I suddenly realized:  This was the best thing I had ever eaten in my life! It was absolutely delicious—a perfect pizza experience. My follow-up regular slice came out much better than the first, and I enjoyed it as well—still speechless from the splendor of the square.

Di Fara’s Brooklyn-style crust was crisp without being burnt.  Although it was a bit floppy at its front point, it was firm and chewy throughout and light and fluffy near the end. What made this pie special was the expert cooking process as well as the use of the finest and freshest ingredients. All this resulted in a delightful blend of dazzling flavors coming from the mix of the oil, cheese, basil and sauce–a taste like no other. This pizza lived up to its status.

If you love pizza like I do, a trip to Di Fara should be on your bucket list.

← Pizza Delivery—As American as Apple Pie
St. Marks 2 Bros. Pizza – You Get What You Pay For →