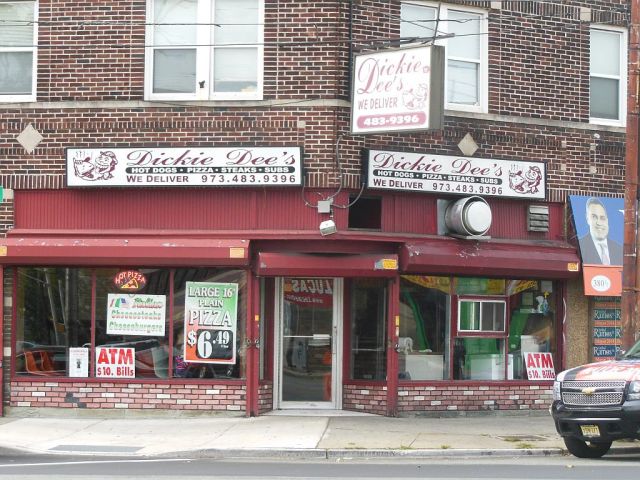 Some non-pizza business brought me back to Jersey, so I got the notion to see what kind of pizza I could find in Newark. Who better for me to ask than my Twitter friend, Mayor Cory Booker?  Well, I never heard back from him. I guess my tweet got lost among the 76,058 tweeters he follows. Or, perhaps he was too busy getting himself elected to the U.S. Senate.

I asked Google instead. The highest-rated place I came across was Francesca’s Pizzeria & Restaurant which led me to an abandoned storefront on McWhorter Street. Next up was Dickie Dee’s Pizza which I found just a few miles west of downtown in a highly-urbanized area on Bloomfield Avenue. Dickie Dee’s sits on a corner of this busy thoroughfare.

Mid-afternoon, I was able to nab a parking spot in the small lot behind their joint. Walking in, I immediately labeled the place as what locals affectionately call a “greasy spoon”–a label that more defines a place’s menu rather than its cleanliness. The small room had several prefab plastic chairs and Formica tables.  Customers order at the counter. From the giant stack of pizza boxes, I gathered that they do a lot of delivery and to-go business. Their specialties were hot dogs, pizza, steaks, and subs. Listed in that order on their sign, I would soon learn that these were ranked in order of specialty as well. I ordered a cheese slice and a bottle of water for three bucks and sat down to wait during the reheating process.

My slice came out nice and hot looking thin and crisp and having all the right dimensions. True to my label of the joint, it was unfortunately quite greasy–too much oil. After a few bites, it became obvious that while this slice was formed well, it was bland, lacking any real flavor whatsoever. The cheese, tomato sauce, and crust were just plain dull! In particular, the crust was dry and brittle. This was nothing more than an average slice at best, and I didn’t care for another.

While seated I noticed a wall full of autographed photos of local celebs. Catching my attention were former Yankee manager, Joe Torre, and Seinfeld’s Soup Nazi. The dedication on the latter photo was “To the Hot Dog Nazi” which probably said it all:  Dickie Dee’s is better known for dogs than slices. I guess I should have left this one for The Hot Dog Snob!

Cory, you let me down! Guess I’ll give you a try next time I’m in D.C.