Over the Christmas Holidays, the Pizza Snob and his family had to drive through the constant traffic mess of the southwest side of Fort Worth. Using my “pie-dar” vision, I spotted two local-looking pizza joints. The first was Palio’s Pizza Café which I found situated in a busy strip mall on Bryant Irvin Road. It’s a pizza joint where you can also get pasta, sandwiches, salads and some other things. The Palio’s enterprise has a second location on the other side of Fort Worth in neighboring Mansfield.

Looking for a late afternoon snack, I brought along the Junior Snob Squad: my two Texan-born sons and their young cousin, the legendary Tay-ster. By now, these guys are used to putting up with my obsessive needs–Starbucks, record-stores, and pizza.   Even so, I have never known these guys to pass up a quick slice or two.

Our Palio’s adventure began rather suspect when we ordered a large cheese pizza ($16.49) at the counter. Going through my mental checklist of the Seven Signs You’re Getting a Good Slice of Pizza, we were off to a poor start. It wasn’t the lack of slices for sale that shocked me as much as did the help behind the counter. The rough and ready Texans taking our order seemed better suited for working a barbeque joint than tossing pizza dough. Leaving my poor expectations behind for the sake of blogdom, I led the Squad to a table in the spacious seating area.

Upon its arrival, our pie’s look made me even less hopeful. It was yellow-toned and covered with slimy-looking, burnt-cheese. Where was the tomato sauce?   If that wasn’t frightful enough, it was sliced in the dreaded Crisscross cut! The pizza turned out to taste as poorly as it looked.  It was not crisp at all, and the mozzarella was tasteless.  I did not see a conventional pizza oven which could explain the poorly-cooked crust. 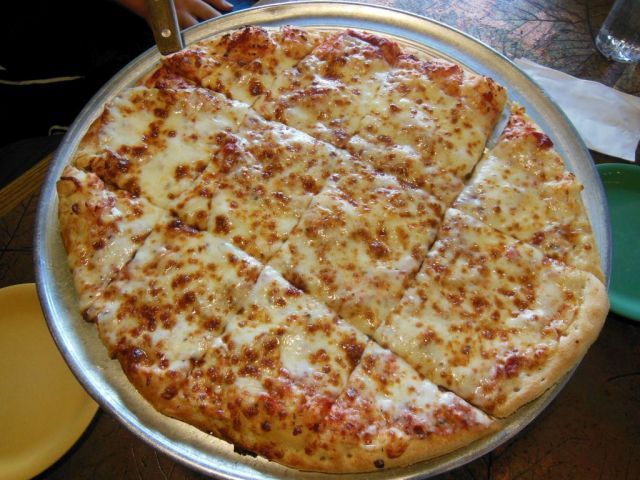 Despite these flaws, The Philosopher posed the thought that it didn’t taste as bad as it looked. To that I retorted that those small cut slices just don’t have much to them:  They go down so fast they can fool you!   The Kid said it was like garlic bread with cheese on it!  When asked what he thought, the Tay-ster summed it up nicely, “No comment. I’m not mean.”  The Junior Snob Squad had spoken.

The only saving grace for me was that our visit earned me some American Airlines Advantage dining points!