In January, the newly launched Music City Center announced the addition of two adjoining food places to their convention facility: a Dunkin’ Donuts and a pizza place called Al Taglio. These two establishments sit on the southwest corner of the gigantic downtown center at Fifth Avenue South and Korean Veterans Boulevard. Both places are accessible from the street directly opposite the new sleek Omni Hotel and its resident, styled-out Bongo Java local coffee shop. A news release stated that the concept for Al Taglio (Italian for “by the cut”) was created by a hospitality firm for the Center. Ownership was not disclosed.

On a cold wintery afternoon, I invited my friend, former boss and fellow pizza lover there for lunch. We quickly discovered that this is a tough place for locals to visit without having to drop a wad for parking. With the metered space on the Boulevard full, the cheapskate in me led us to find a free spot several blocks away–one that only a downtown parking warrior could find!  Once inside, it was apparent that Al Taglio’s was primarily created as a “captive” location for conventioneers, being quite crowded with many name tag wearing out-of-towners. 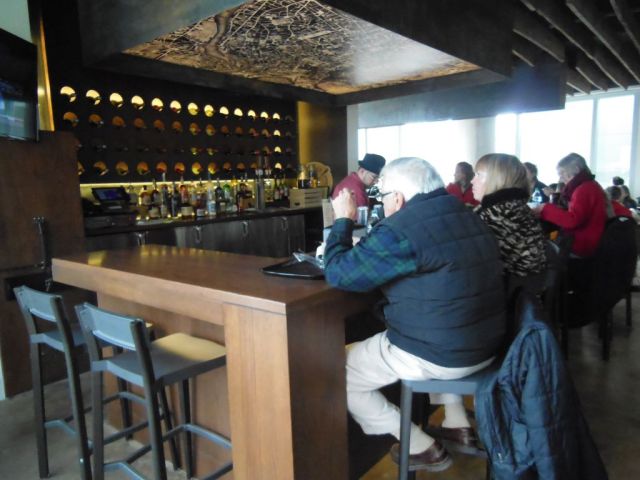 Al Taglio’s clean and modern look was clearly designed to fit with the classy Omni. It features a full service bar even though it is a small room with only a few tables both inside and out. On this busy day, seats at the bar were our only option, and they came with the downside of the occasional blast of cold outside air from an opening door.

They call their pizza “Roman-style,” but it looked like Sicilian—or “square,” as they call it in pizza country. Ordering at the counter, we came upon their slice display with four choices laid out on what looked like a giant baking sheet. I chose the “Rosso” with its mix of tomato sauce and Mozzarella and Pecorino cheeses which was their proxy for a plain cheese slice. I ordered a pair ($4.00 each) but passed on adding a $7.50 salad not wanting to blow twenty bucks on lunch after adding a bottle of water. Captive-pricing indeed!

Seeing the slices on the baking sheet led me to believe they were hot and ready to go.  Much to my surprise, they loaded all four of our good-sized slices into a TurboChef convection oven to be reheated. Looking like a microwave on steroids, I was afraid what this contraption would do to my slices.  Sure enough, they looked a lot better before they went in! The after version looked like a “melt” over a thick slice of bread. Fortunately, the convection heat did not dry out the pizza like a microwave would have.

Despite the look, I found the slice to be quite fresh and tasty. By request, I got two corner slices and soon found that the crispy end crust was by far the best part. The middle was too bread-like and airy, and I felt like I was eating cheese on bread. The dough was also not as traditional tasting as a Sicilian.  While it was tasty, I am really not a blended-cheese guy and found the Pecorino too strong and pungent for my taste.

With Al Taglio, the Center did a great job of maintaining its upscale image tie-in with the Omni. While I did not dislike this pizza, I certainly did not like it enough to go through all the hassle again. I even passed on a return visit when I was held captive downtown for a two-day meeting at the Omni. Al Taglio’s Roman style doesn’t really seem to be my thing, and after all, both Joey’s and Manny’s are only a short hop away!