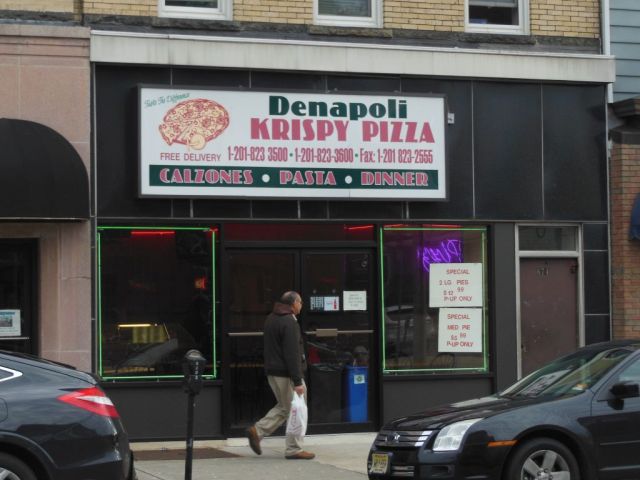 Walking back home from my Bayonne Pizza Blitz, I thought I was finished until I saw another place that was off my radar. This joint was just a block up from Brothers on the other side of the street. Thinking that I had room for another slice, I thought I’d give this place with an interesting name, Denapoli Krispy Pizza, a try. I found the thought of a crispy pizza quite enticing, so the appeal imbedded in their name worked!

I walked inside to find a sleek modern-looking interior with flashy tile and a violet neon “pizza” sign. Denapoli’s design was a diversion from the Bayonne pizzeria handbook despite its modest look from the outside. The sleek design was quite Spartan with bare walls and little else in sight. The napkins were even hidden behind the counter. Denapoli’s was also different in the price department:  Surprisingly, my plain cheese slice was only $1.50. 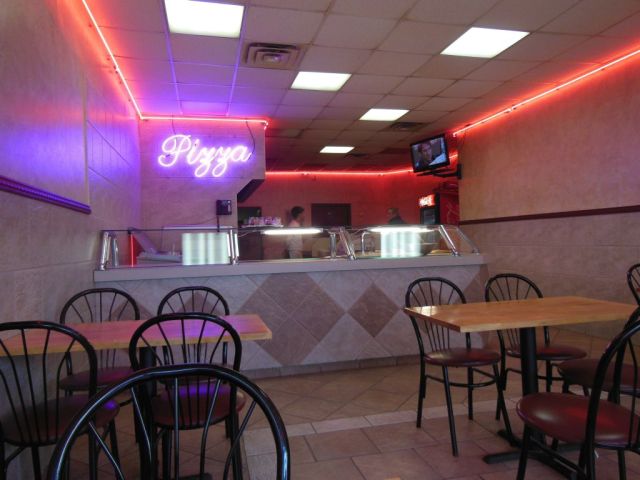 Things started off a bit strange when my slice came out so steaming hot I did not even want to touch it.  I could also tell that the cheese was fragile, and that I was going to have trouble keeping it on the crust. Overall it was cheesier and oilier than my liking. There was also a flaccid spot in the middle of the crust that caused some huge cheese slippage. In fact, when I was done, two large globs of cheese remained atop an oily paper plate.

The advertisement of “krispy” was certainly a disappointment since there was really nothing crispy about this slice at all–until I got to the crust which produced a crunch. Overall, this was disappointing for a Bayonne slice. It was even a little wider than usual making it harder to fold to help with the hot slipping cheese issue. Man, this slice was a mouth-scalder! 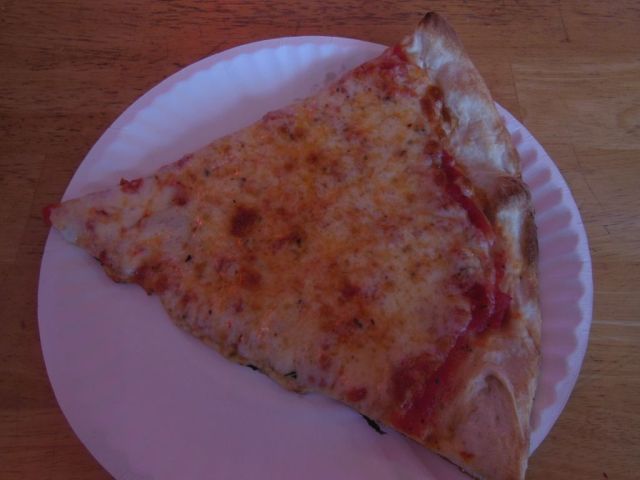 On the good side, the slice had a nice oregano flavoring, and when I could safely manage a bite without burning or making a mess on myself, it was quite tasty. Sorry, but there are too many better joints in Bayonne. I doubt I will go back to Denapoli.