After scoring at Stromboli Pizza, the Pizza Snob continued his evening walk through the City with no particular place to go. Walking back to the Village, I overheard a young man asking a stranger where he could get a slice of New York pizza. I immediately got nosy, interrupted and took the Californian to Joe’s Pizza, telling him he would be getting the best there is. While there, I joined in for a slice and wasn’t the least bit disappointed. But, it may have prejudiced me for the next pizza stop of my evening.

(Note—I know that this is not my line of business, but I did have to first follow Joe’s with a visit to the place next store where I had one of my favorite all time sweet treats.)

I took back to walking and started wondering where there might be another pizza place that I had seen before, but had not yet tried. With Dad’s car in Soho, I started walking down Lafayette when I recalled seeing a place nearby that was across from a small triangular park. Getting closer, I then spotted Champion Pizza Soho which was still serving slices at this late hour. 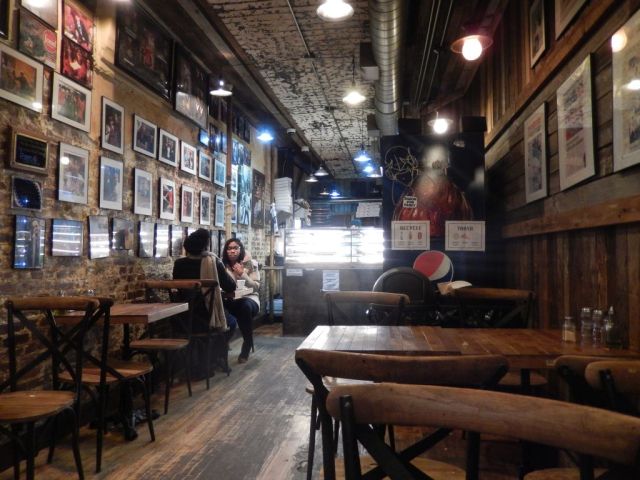 Before I entered the small comfy shotgun-style room with a wooden floor and bare brick walls, I came upon their sandwich board sign advertising that slices were only $2.00. While not as brazenly cheap as the dollar-slice joints, it still was a caution for the Snob. I’m just not one who is looking for discounted pizza.

At the counter in the rear were many slices on display with an obvious slant towards a variety of specialty square slices. Sticking to the basics, my usual plain cheese slice took only a mere 45 seconds for its reheat. Taking it to a table in the front, I was gobsmacked as to how perfectly-assembled and expertly-cooked this slice was. It could not have been toasted and charred any better.

But, it hit me right away—the tomato sauce had a sweet taste which just wasn’t going over well with me. But man, what a wonderfully crisp and crunchy crust—it even cracked when I folded it. The cheese was fine, but as I got to the end, I really tired of that sweet-tasting sauce.

Perhaps a bit prejudiced by both my previous slice at Joe’s and Champion’s discounted price, this slice that had so much going for it turned out to be somewhat of a letdown. Still, it’s a decent slice by anyone’s standards and certainly a great bargain for the price. But this is Manhattan, and there are so many better places that I prefer.