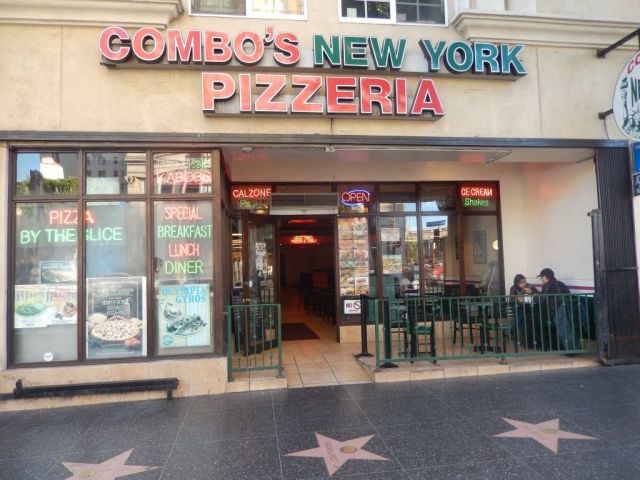 Still on my L.A. sojourn, my Left Coast buddy and I headed into Hollywood for some necessary business at the world’s greatest record store. Afterwards, we took a stroll over the stars on Hollywood Boulevard and made an unplanned pizza stop at Combo’s New York Pizzeria. In addition to its blatant name appeal, Combo’s looked the part both outside and in. It was obvious though that their menu was wider (gyros, breakfast, pasta and deli sandwiches) than just their featured specialty.

In business since 1980, Combo’s occupies some prime real estate smack dab in the middle of Tinseltown. A spot like this on Hollywood Boulevard is akin to being on Times Square in New York City.

It was an early Saturday afternoon when we joined the good sized crowd, many of whom were watching the USC football game on the television screen. I stepped up to the counter and ordered a plain cheese slice at the hefty price of $3.95. (I guess you got to pay for that premium rent somehow!) 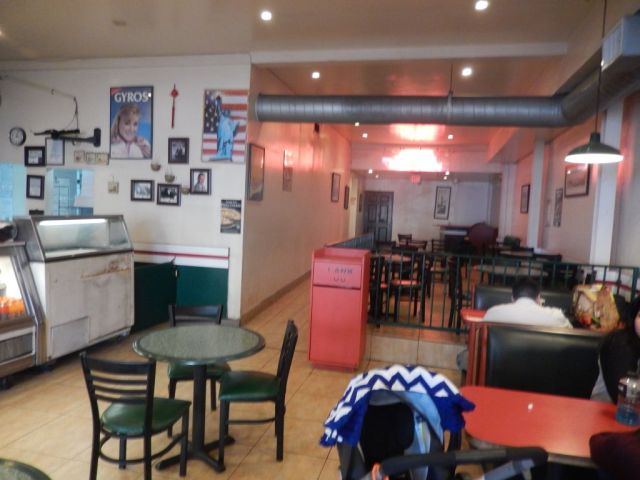 It didn’t take long for my slice to come out of their real pizza oven. It was a good-sized one—somewhat bigger than usual. However, right off I could see that my slice looked way too white from a bad blend of cheese and sauce.  But, the seasoning on it was quite perky, and my slice wound up being quite tasty and enjoyable. Overall though, I would call the cheese and sauce average and nothing spectacular.

The crust had only a slight char underneath making the slice not very crisp and a bit floppy. It also looked spongy and tasted dry. Perhaps, a bigger dose of olive oil could have brought this guy to life. The extra seasoning did make for an interesting slice, and I wound up eating the whole thing and enjoying it. I did leave with a dry taste in my mouth.

I wouldn’t go out of my way for a slice at Combo’s, but if you are strolling along the stars on Hollywood Boulevard, it’s not that bad of a place to grab a quick one.