Hard to believe that it was over 10 years since I last visited the Los Angeles area. Finally making my way back, I had a feeling that I would be able to find some good NY-style pizza there. If both the Dodgers and Giants baseball teams could make their way to California, I figured that some New York City pizza masters could as well. My belief was confirmed when I found that Joe’s Pizza in Santa Monica served one of the best slices I have ever had!

Although I had a few area recommendations, I came across Joe’s in Santa Monica courtesy of Google. I later learned that there are four other Joe’s Pizza joints in Los Angeles which are listed at a separate web site (www.joespizza.it). There it mentions their owner is an ex-New Yorker who also opened the Santa Monica location. But for the life of me I was unable to find if all these are still under common ownership. Interestingly, the page for the LA stores carries a disclaimer that two of the four sites are not affiliated with Joe’s in New York. (Can you really trademark the name “Joe”?) To say the least, the Pizza Snob finds the connection between all these Joe’s joints very confusing.

Getting down to business, after a morning walk along the Santa Monica pier and beach, my Cali-friend and I were ready for an early lunchtime slice of pizza. (Surprisingly Joe’s opens at 10am. I guess that’s for the early morning beach traffic of walkers, skaters, cyclists and yoga enthusiasts?)

Joe’s runs a small room with a few tables, chairs and a side wall counter from a storefront in a row of retail shops. It’s just a block off of the beach, and there are even a few tables out front suitable to the nice Cali weather. We walked up to the front counter where there were a few types of slices on display under glass. Joe’s serves mostly pizza with only calzones and salads otherwise on the menu.

The Snob ordered a plain cheese slice for the premium price of $3.00. My friend ordered a “Grandma” which wasn’t really a Grandma to me, but really a Margherita slice like you’d get in Brooklyn. (She absolutely loved it: “Super-fresh sliced Mozzarella, really light tomato sauce and perfectly-crisp crust”).

As for my slice, I was totally in shock about how perfect this it was. It was good as the one from its namesake in New York City. First off, it had an unbelievably beautiful and consistent char all the way through its bottom crust, making for a perfect fold and a crispy delight. Although it looked like it may be a bit oily, after letting it settle a bit, it turned out to be just right and fully flavorful. The cheese and sauce were fresh and delicious. They even served mine at just the right temperature to comfortably dive right in. 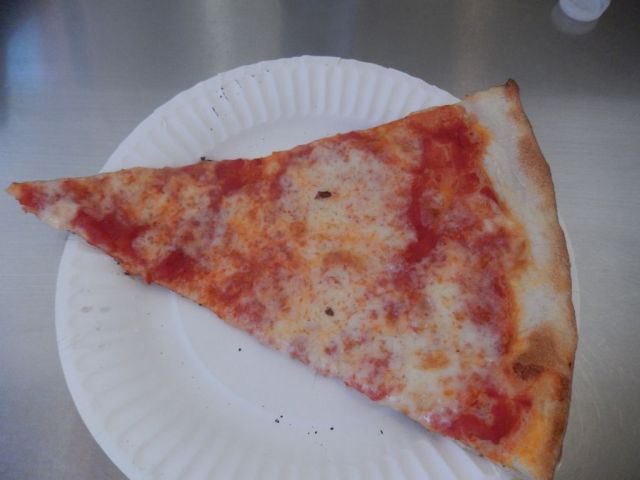 One thing I have learned about pizza is that you can’t just use good cheese and sauce to dress up bad dough. Joe’s certainly has gone through the task of making a super crust for its pie.

Although my compliment to my server brought a smile to his face, I am sure that they are tired of New Yorkers like myself telling them that they know what they are doing! They have certainly lived up to the reputation of their New York namesake. It doesn’t get any better than this!