The Sunday afternoon matinee show at Hamilton Park House Concerts was over, and it was time for another new Staten Island pizza adventure. For the uninformed, the Island is a big place evidenced by its 14 zip codes—so there’s a lot there to seek out. My web wandering found a worthy-sounding place called Sharkey’s Square Pizza on a list of “Eleven Pizza Places Worth Going to Staten Island For.” (The list named this place as only “The Square” for some reason.)

So while snowflakes started to fall on this first day of spring, my phone map took me south into the Dongan Hills neighborhood. Driving through many new areas, I was surprised with the number of uninviting pizza places along the way. Selling pizza along with fried chicken, cheesesteaks or gyros is a red flag that your pizza is not anything special.

Hylan Boulevard is a busy commercial thoroughfare that runs just about the entire 14 mile length of the Island. If you have ever traversed Staten Island, you’ve been on it. Sharkey’s sits in a small strip center sitting perpendicular to the road on its east side.

After parking in front, I entered the small shop in the usual pizza set-up: seating in the front and counter in the back. I was the lone customer at this odd hour with the unseasonal snow storm on its way. Wanting to honor their namesake, I ordered plain cheese slices of both the square and a regular (total cost of $4.50). While these guys were being reheated, I took a seat and watched the Yankees conclude a pre-season loss to Tampa Bay in sunny Florida.

The round slice sitting on the counter surprised me by looking light in color. However, I think this was just a par-baking thing since the final product was a much brighter, fresher red.  As for the square, I was surprised how tiny it was. 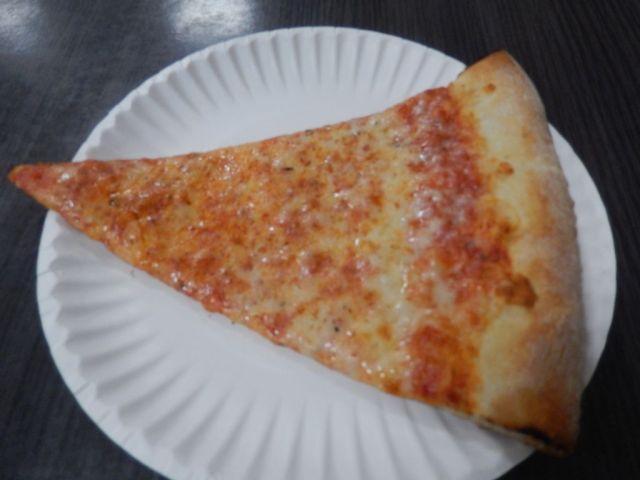 Starting with my slice from the “round,” I right away noticed that it had a good char on its bottom crust which delivered an overall good flavor. However, for whatever reason, despite the char, it was a tad bid on the soggy side—let’s just say that it was soggier than it was crisp. There was almost a fluffy feel to the combined cheese and crust. But, it was OK—there was just not an instant amazing rush to Sharkey’s slice. Constructed and cooked well from good stock, this was better than your average run-of-the-mill slice, but not much more. I just wasn’t craving another after I ate this one.

I was disappointed to get only one edge on my square. This guy was also so light on its cheese content that I asked my hostess about it. She said that there was only a very thin slice of Mozzarella underneath the sauce. (Some would call this a “Grandma.”) My lone edge was crisp, crunchy and tasty. Put on very thick, the fresh tomato sauce was over-powering in its taste (as my young nephew would say “It over-ruled!). Nonetheless, I found it totally delicious and flawless.

But, I’m more of a cheese than a sauce kind of guy. If great tomato sauce on toasted bread is your thing then this square’s for you. The small slice of cheese was almost indistinguishable.

I’m glad I tried both of Sharkey’s offerings. While I enjoyed them, I’m just not gonna tell you to go out of your way to go there. As an available option though, it’s certainly a good one.