Readers of this space know that I originally hail from the fine city of Bayonne, NJ. What some may not know is that my home town is just a short hop away from New York City’s oft-forgotten borough of Staten Island. It’s a costly place to visit with the only current way of getting there by car which means a hefty $15 toll to cross the Bayonne Bridge. The ferry used to take you there, but now it only runs from Manhattan. And the Island is the only of the five boroughs not connected to the New York City Subway. (Note that once the bridge construction is complete, walking will once again become an option.)

Growing up, I got to know its cheap public golf courses and the ahead-of-its-time Staten Island Mall. But, Staten Island is a big place, and I’m seeing that there is an awful lot to explore. Like most of the Greater Metropolitan area, I’m finding it to be a haven for great pizza. My recent visits to the fantastic Hamilton Park House Concerts gave me another opportunity to grab some new slices there.

The first house concert I attended ended around 9:30pm on a Saturday night. Although I was on the north shore of the island where I could actually see my childhood bedroom window, I knew nothing about where I was. With no advance planning, I tooled around with my Pizza Compass on my trusty iPhone and found the nearby Val’s Pizzeria that would be shutting at ten. Only a short drive away, I made it just in time as their lone last customer of the night.

Val’s Pizzeria’s location is an interesting one. It’s a free-standing building attached to Val’s Convenience Store with family residences on top. The dinky single-lane surrounding streets are way busier than their size should allow. I carefully located the well-lit place and was able to park in their small front lot. 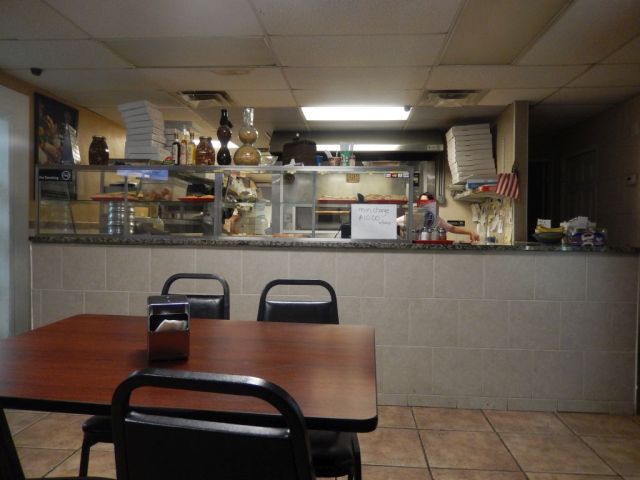 The room is small and square with a long counter in the back that separates the front seating space from the work area and oven in the rear. I could see that they made both a regular and a Sicilian slice and also featured heroes and pasta. The lady at the counter, who I took to be an owner, took my order for a single plain cheese slice ($2.00). Interestingly, my reheated slice was untouched by human hands as she used the long-handled pizza pusher/puller to slide it in and out of the oven.

Well, it only took me about 30 seconds to finish off this fabulous slice of pizza. It disappeared so quick that I started to get another one (or two) until I realized they were about to turn the lights off.

Maybe the slice was a little smaller than usual, but that didn’t matter. It was strong all the way through (cheese, sauce and crust) and heated just right for my immediate eating pleasure. There was not too much oil with only a few drops dribbling off. Tasty, light and delicious, it had a flavorful flair and I detected some light seasoning. The end crust was a little dry and that probably kept this one from the top of my rating scale. The crust did have a solid char on its backside, and I did pull off a perfect Fold & Rip getting a nice cracking sound in the process.

Val’s makes a “don’t-pass-it-up” slice of pizza! Although not unique, it’s pretty darn good—a simple combination of the know-how to make a great pizza while using the right ingredients.

While some of my previous Staten Island pizza experiences (Lee’s Tavern, Nunzio’s and Joe & Pat’s) have revealed a similar unique crunchy style, Val’s is a throwback to your basic NY Slice, and I’ve got no problem with that.