UPDATE: Bayonne’s Pizza Masters Gets a Makeover & a Snob Upgrade

OK-if you live in Bayonne, this is old news to you. But, in the fall of 2014, popular local joint Pizza Masters underwent a massive facelift. In the process, they more than doubled their space, redesigning and moving the counter from left to right and adding a separate dining room in addition to an oversized main pizza room. The outdoor storefront also was reconfigured to cover the new territory from the takeover. It’s a big pizza place and now the biggest in town!

Much to everyone’s delight, Pizza Masters managed to stay open during construction and has now long since been up and running in its new digs.

In town and itching for a slice of good pie, the Snob scored one and came away thinking he really underestimated Pizza Masters in his original review. Theirs is a strong slice. 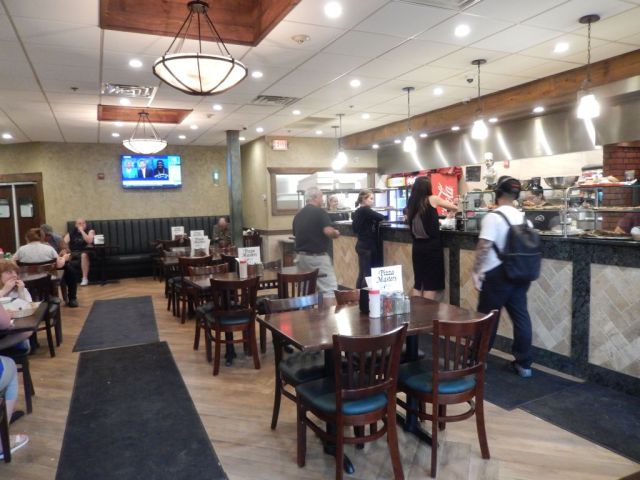 Still offering a wide variety from which to choose, my regular plain cheese slice ($2.30) took just a few minutes to reheat. The eating temperature was right on, and I was instantly impressed how solid and firm the Pizza Master slice was. It’s also bigger than most and it took two paper plates on which to serve it.

Its solid state came courtesy of a good consistent char on the bottom. On top, while things were far from being over-spiced, it was no way dull in taste. Both the cheese and tomato sauce were balanced and well-proportioned and of high-quality deliciousness. About the only minor knock on this one was that it was a notch dry—it could have stood a bit more oil.

But, by gosh, this is a worthy slice. And like I usually say, if this was in Anytown, USA outside of the Pizza State, there’s be a line around the block to get in!

← Ciao Bella Pizza—Tasty, But Not Very Italian Pizza in Destin, FL
Pizza at Bayonne, NJ’s Three Brothers from Italy—Dirty Looks Can Be Deceiving →