Earlier this year I had the pleasure of discovering a great “street slice” place in Jersey City called Prince of Pizza.  While devouring one of their perfect slices, I was surprised to find that they also had a joint in the northern end of my neighboring hometown of Bayonne. News to me, I can only assume it to be a recent venture. So, on my next trip back, my daily activities in Jersey City offered me the chance to travel a few blocks across the Bayonne border to see how this satellite Prince of Pizza location compares to the original mother ship.

On my usual late lunch hour, I hit the place at about 2pm in the middle of the week and was their lone customer. POP-Bayonne is located in a small storefront in the middle of the block on uptown Avenue C. I was surprised to see that their outdoor awning doesn’t capitalize on the traditional Italian-flag logo of the Jersey City site. Instead they have designed a fresh new modern-looking design emphasizing on-line ordering.

With the afternoon news blasting on the tube, I ordered the pair of cheese slices with my name on them ($1.75 each, tax included) that were sitting on the counter in the back. I then took a table where I multi-tasked listening to the brutality of the current election news and reading some work e-mails on my phone. 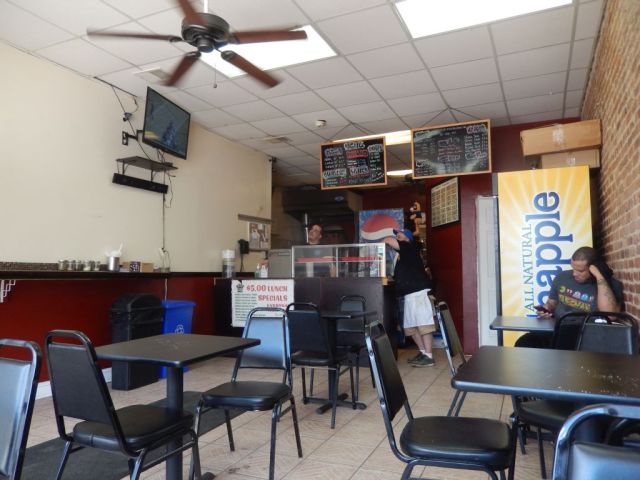 Although the room was small, it was probably twice the size as the tiny Jersey City “grab and go” spot. However, sitting at one of their tables today was a challenge. The air conditioning wasn’t working, and a giant fan doing its best to provide comfort on this hot 90-degree day.

After a two-to-three-minute heat up in the pizza oven, the slices were mine and they were fantastic! POP has successfully brought its pizza perfection into Bayonne.

The POP slice may be a little heavier with cheese and oil than some others, but it is far from being overdone. The slices were really good and hot although the way through—a cautious eat, but I suffered no roof-of-mouth casualties. I got some help from the solid-charred bottom crust which let me do a full fold from tip to end crust which protected my mouth from the hot scrumptious contents. Neither overly-seasoned or bland, the blend of the cheese and sauce tasted downright delicious.

I felt like I was eating my slices in a dream-like state, simply lost in the enjoyment of just how good they were. To the best I can recall, the pie was pretty much the same as the JC location which says a lot.

If I lived in uptown Bayonne or lower Jersey City, this would definitely be my go-to place for a quick slice or a pie to bring home. But, like its parent in Jersey City, POP isn’t the kind of place you’d take your date after the prom. Nonetheless, this is East Coast NY-Style pie as good as it gets.

PS—This now poses a question to my fellow Bayonnites: Is Pompei Pizza still the city’s best? After a recent repeat at Pompei, the Snob still ranks it #1 on the peninsula. What do you think?