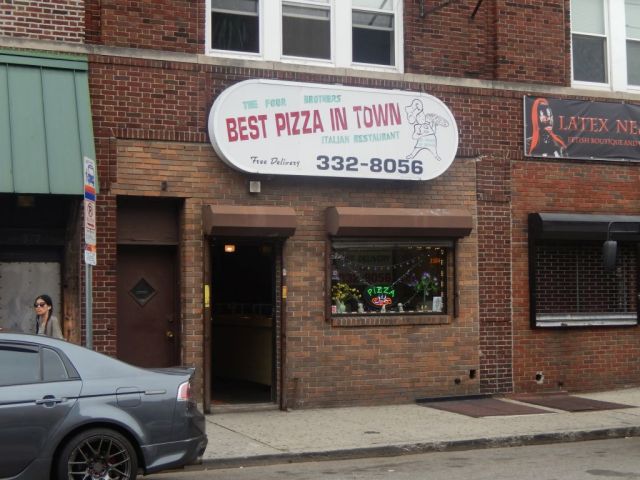 My Jersey City followers will have to suffer one last post about my recent local pizza explorations. This time it was on a Saturday with my brother. Together, we made a trip up West Side Avenue to a place where the sign read The Four Brothers: “Best Pizza in Town”.

This part of the West Side Ave. commerce district was just below busy Communipaw Avenue and looked in dire need of a face lift. The surrounding neighborhood between West Side and the Boulevard was also quite populous which made nearby parking a scarcity. Sadly, the neighborhood has also seen better days. As we walked up to Four Brothers’ the front door, a woman begged for us to buy her a slice of pizza.

It was late afternoon and we were the only customers. The menu board behind the counter listed a limited menu of pasta and sandwich choices with no salads with which to balance my meal. We both order pairs of slices, mine of course were of the plain cheese variety.

At the helm today were an older ethnic couple (not Italian, but more Eastern European) who I pegged to be the owners, Stanley and Michelle. There was an intoxicating “old world” charm to the place. The subtle lighting and mysterious décor of the backroom took me back in time. I myself am from Eastern European stock, and the feel of the room reminded me of being in my grandparents’ living room when I was a child.

Sitting at the counter in this dining room full of interesting curios, I felt like it was the 1960s. The tan-colored tones of the wooden furniture, old wallpaper and parqueted floor were from a much simpler time and place. A current copy of Pizza Today magazine sitting on the counter was the lone clue that this was the 21st century. (Other than of course the fact that the slices were two bucks a piece instead of a quarter!)

Getting to the pizza, let’s start with what my brother had to say: “It’s not in my all-time rankings, but it’s a good slice.” I did catch him leaving his end crust “pizza bones” on his paper plate, but that’s not unusual for him.

As for myself, I was knocked out by how well-toasted and crisp the bottom crust was. The slices were reheated perfectly and just right to eat upon their delivery. They had a nice touch of oil that gently drained off the bottom. Maybe the taste of the cheese was slightly off of my normal taste sensor, but it was well-balanced in content with the flavorful tomato sauce. These were good solid slices that we devoured in record time. I’m just a sucker for a good firm char on a slice of pizza that makes it stand strong and firm all the way through.

For the price, the slices were good and long. Also, for me, this marked the return of “pizza bumps” on top which I had not seen in a while. I guess just another reminder of the good old days of traditional New Jersey pizza. 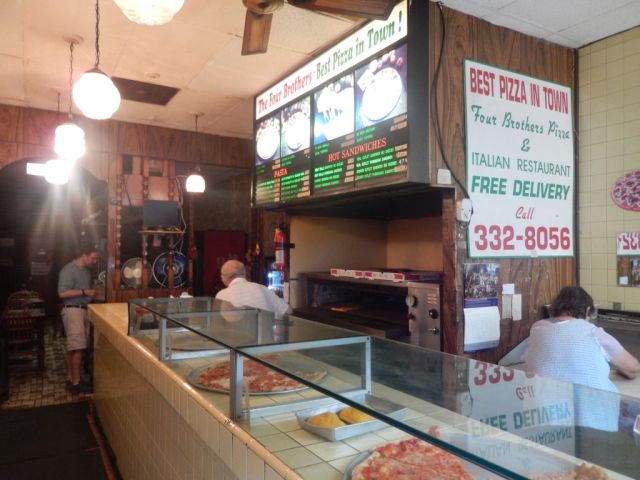 Four Brothers makes a great slice of pizza. Too bad its location makes it a little difficult to navigate. I’d give it a try though if you can. It’s obvious long-standing is a testament to its greatness.