The Snob moved to Franklin, TN in 1998. I love it here and plan on not living anywhere else. However, I’ve got a real bone to pick with this town, and it has a lot more to do with than just pizza!

Franklin’s downtown has a beautiful square and historic district that is flanked by two long blocks of shops along Main Street. Once the home of many unique delightful local shops and eateries, the retail space has been rapidly swallowed up by the boring national chains: Starbucks, Mellow Mushroom, Chico’s, etc. I think you get the drift.

Recently a cool antique shop was shuttered. (Can you say ridiculous rent?) Maybe in another day, in its place, a local family might have opened a pizza joint cooking with an original family recipe. But faced with this current retail calamity, we get instead Pieology, a crappy corporate pizza concept.

Mrs. Pie and I first noticed the sign announcing their coming and then later spotted a huge line for what turned out to be a free-pizza day grand opening. A few weeks later, after getting a “a buy one-get one free” coupon in the mail, we thought we’d suck it up and give Pieology try, certainly without any great expectations. We knew that it was one of those horrid assembly-line make your own pizza places, but, unexpectedly, we did find that a similar concept place in nearby Cool Springs, Pie Five Pizza Co., was at least reasonably edible. However, Pieology would prove to be much worse. 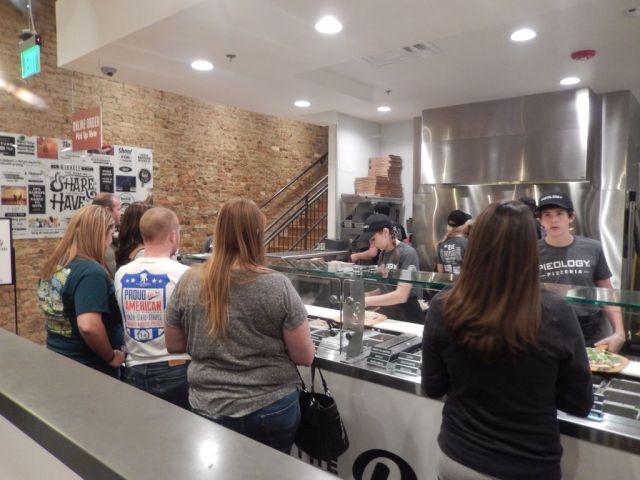 One thing we witnessed this Saturday night is that Pieology is pretty popular. We made our way in and lined up at the pizza-making counter. I went simple ordering the “Easy Cheesy” for $7.45. (Mrs. Pie went for one that was tripped-out with veggies.) I did have them throw a few sausages on one side when I saw how plain and dull it would look otherwise.

My pizza-red blood started to boil at this point. My disdain for this venture was epitomized by the dozen or so Pieology tee shirt-wearing high school kids working behind the counter. While I have had the honor of eating pizza made by some of the greatest pizza masters in the world, here my pie was being assembled by a bunch of kids who had just studied the company manual!

The drill is for them to take a pre-made crust and top it with your requested goodies before putting it in the oven behind the counter. (The so-called “Study of Custom Pizza.”) Despite being busy (seems that some people just settle for novelty and quickness rather than quality) our “creations” were rapidly delivered to our table by a young server after matching our number.

A few bites in and it was obvious that the crust platform pathetically tasted like a saltine cracker. Good dough takes days, not minutes. Everything on top, the scant cheese and tomato sauce and the tasteless toppings, just contributed to a total lack of flavor. Mrs. Pie’s also came out undercooked and cold. And while mine wasn’t, the presence of some char on the bottom crust didn’t make any favorable contribution.

Adding to our misery were the two salads we ordered that came after our pizzas and were sadly pre-made in a box and as dull in taste as the pizzas.

Pieology will probably be successful with locals and tourists who will enjoy its novel experience. However, it’s just bad pizza that this Pizza Snob can do without. Mrs. Pie summed it up nicely, “It tastes like mall food!” In an earlier day and age, somebody named Tony would have opened up a family-owned pizza joint, and we all would have been better served. This ain’t progress!

A word to the wise for those with better pizza taste. Mellow Mushroom down the street is a much better option, and the real deal at Sal’s Family Pizza is just a short drive away.

← UPDATE: The Venice in Bayonne N.J. Says it Will Reopen!
Nashville’s 312 Pizza Company—The Snob Settles for Some Good Chicago Thin →