In addition to eating new pizza, I had another mission during my recent San Francisco trip: meet my cousin’s son for the first time. For an educational aside, my research revealed that he is my “first cousin once removed” although it is acceptable for us to refer to each other as nephew and uncle. Our plan was for our group to meet at Tony’s Pizza Napoletana in North Beach at 6:30pm on a Friday night. They don’t take reservations.

Tony’s was the #1 pizza place recommended by my Bay Area friends. But, the late philosopher and New York Yankees catcher Yogi Berra might have been talking about Tony’s when he said, “Nobody goes there anymore. It’s too crowded.” Arriving at Tony’s, we were told that our wait would be a ghastly 2 ½ hours. With this plan dead, while our group sought an area dining alternative, I fortunately spotted and moseyed over to The Original Slice House by Tony Gemignani annex next store. There, I would be able to scarf down a quick slice so that the night would not be a total waste from a pizza perspective.

From the looks of what I saw over at the crowded flagship “Big Tony’s,” the pies were of the classic Neapolitan style. However, over at “Little Tony’s,” (opened in 2010 where a deli once stood) the focus was on other slices including the New York style I would try. Boy did my eyes did light up when I saw the words “coal-fired.” The only other place I have seen coal fired slices is Brooklyn’s Table 87. 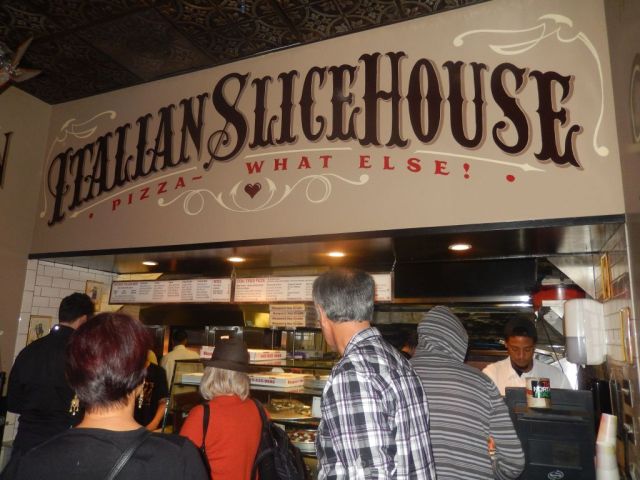 While the small walk-up room was also bustling, I took my number (#431) and scored a slice rather quickly. It shockingly set me back five big-ones, and I chose the “plate” over the “box.” When I got it, I was barely able to find a place to eat it since there was only a single table in the tiny rocking room. Most folks were eating theirs out on the street sitting on the planters or whatever else would make do.

The slice glowed with a mysterious look. I immediately appreciated the effort that went in to creating something different like this. Admirably so, Tony has made a valiant attempt to add his own special twist to the New York slice. But right off, I knew that this slice would not be totally up to Snob standards despite the fact that it was made from good stock

Most obvious was that the shine came from the fact that it was extremely oily. My first bite also revealed that it was extremely spiced—way too heavy on the oregano. Long and lean, the slice also took a total flop when I tried to pick it up. Even Superman couldn’t eat this slice with one hand. Very light on both its fabulous rich zesty tomato sauce and tasty cheese, it was cooked well, but without attaining any firmness.

The crust was delightfully chewy and its flavor won me over, although there were disappointedly no noticeable signs of any coal in its taste. Likewise, there wasn’t a single crunch resulting from any of my bites. It was a workmanlike crust in that it really put my jaw to the test. The embedded cornmeal crumb flakes added a delicious touch to an already awesome crust.

Tony’s slice makes a bold statement to be different. One thing I pondered is whether I could even eat another without feeling too heavy or bloated from all that oil. I’m glad I tried it, and I can see how this could be popular. However, it just wasn’t a home run for me. My high rating comes more from the awesome crust and the slice’s uniqueness. And while I’m not prejudice against pizza that is different, sometimes different just isn’t all that better. If this slice was more firm and less oily, it would have scored much higher in my book.