Our busy tourist Saturday in Frisco, including an exhilarating bike ride over the Golden Gate Bridge, was coming to an end. But as the sun was starting to sink, I knew I could talk my son, the Kid, into grabbing a slice on the ride back home. It was also time to get back to the recommendations of the great San Francisco pizza slice article at Serious Eats. Our target would be Pizzeria Avellino, a place the reviewer labeled as the city’s “Closest Thing to a New York Slice.”

Avellino sits on the street corner at the eastern edge of the massive park known as the Presidio. It is also situated on Lombard Street just about a mile away from its famous crooked stretch. As with most of this town, parking wasn’t easy, but we did luck out with a spot just a few blocks away.

Avellino’s small funky room was calm except for a small group of children meeting after a soccer game. It looks like their parent coaches had some input into their dining decision since their otherwise plain cheese pies were topped with bunches of healthy dark green arugula—only in Frisco! However, what we saw sitting beneath those piles of greens sure looked inviting.

The room had more of the look of an old New York tavern with its dark speakeasy feel than it did a pizza joint. It was adorned with some New York mementos, the coolest of which was a fascinating collection of photos featuring vendors peeking through the windows of their iconic NYC sidewalk newsstands. 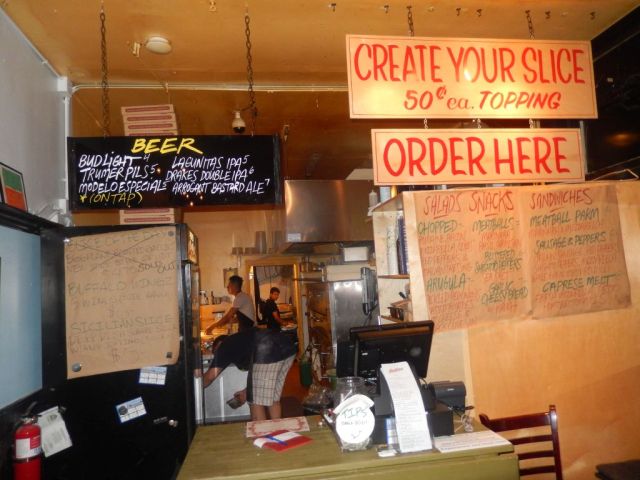 The Kid and I made our way through the narrow room to the back counter where we ordered a pair of cheese slices at the bargain SF of $4 a pop. They also had Sicilian slices for $5, but when we ordered two plain cheese, he recognized us as just regular guys.

Although he said it’d be two minutes, it took about five. Even though it had gotten a bit chilly, we still took our slices outside to a table on their big side patio. The outdoor chill would not ruin the perfect serving temperature of our slices.

I immediately acknowledged Avellino as the best slice I’ve had so far in Frisco. Tasty and delicious, I agreed with the other blogger that this was close to something you’d get in New York. It’s only knock was evident by its extra cheese. (Not to the point of any slippage though.) There was a good solid char on the bottom crust and on top it was nicely oregano-seasoned. Cheese and tomato sauce both scored high in my book although the extra mass of cheese made them come together more in a swirl than a blend. The char gave way to a good crispness and made for a good solid fold.

Even the sometimes fussy Kid agreed on this one, adding that in a state where marijuana is legal, pizza standards are usually low. He was proud though that the bread-minded San Franciscans got the crust right.

Avellino looks to be a popular family-friendly place that I’d go back to in a flash. I would recommend that you give it a try as well. This will be hard to beat as the best slice in Frisco.