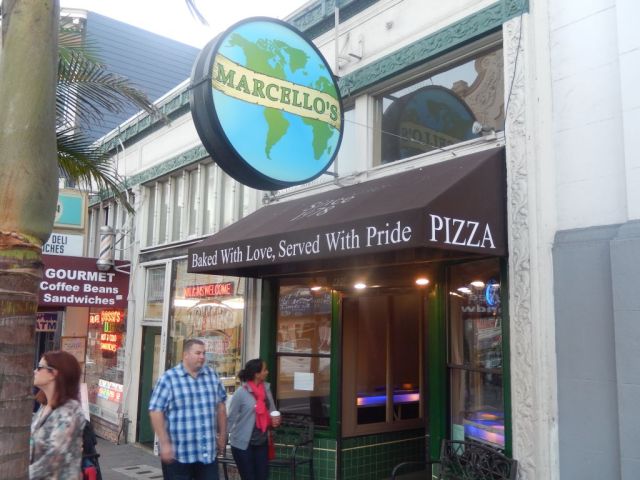 Wandering around the downtown Market Street area in the late afternoon, I must have passed over at least a dozen pizza joints that simply looked like they’d be awful. However, some iPhone pizza research detected a possible worthy place over in the Castro district. I also was somehow successful in luring Mrs. Pie in that direction as we were walking about town. We found my target, Marcello’s Pizza in its proud “420” location right across from the beautiful historic Castro Theatre where Castro meets Market.

I ordered a PC (“plain cheese”) slice ($3.86) at the front counter, and we took seats along the counter by the front window. Said counter was way cool with a see through blue light shining through its bottom. It took a while for the reheat, and when they took it out I could see that they exercised special care in seeing that it was toasted just right.

Mrs. Pie liked what she saw and ordered up her own white-looking specialty slice. She sure was in for a surprise when she tried to spice it up with some oregano. A loose lid on the jar caused a mountain of the stuff to fall on her unsuspecting slice. (Was she the victim of the old New Jersey diner prank they used to do with the sugar jar?) The nice folks at Marcello’s saw what happened and gave her a clean replacement slice.

Marcello’s slice was desirably thin and not too far away from being like one from a New Jersey bar pie. It was also served at the perfect eating temperature. Right off I was loving this absolutely delicious pizza. The fresh dough was perfectly charred on the bottom, and I laid into a classic Fold & Rip. With tasty Mozzarella cheese and rich thick tomato sauce on top, I could found no points to deduct on this one. This was New York style pizza at its absolute best. After a long day of shopping with Mrs. Pie, I sure was smiling.

I would suspect that someone (other than me of course) wouldn’t take a vacation to San Francisco just to try its pizza–especially since this is such a foodie city. However, I suspect that if you are reading this it is likely that you don’t like to go a week without having a slice either. So, I’m telling you that Marcello’s is the pizza place to hold out for in San Francisco. It certainly is the best I had on my first trip there as the Pizza Snob. Let’s see how this holds up when I return in 2017 for another visit.